Wallabies down All Blacks in Brisbane nail biter. 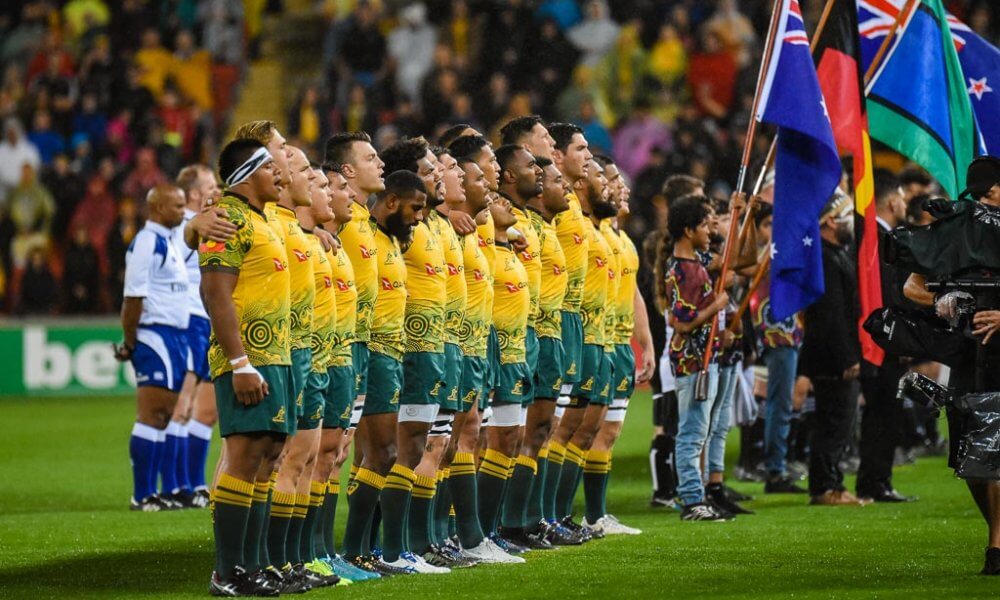 Wallabies down All Blacks in Brisbane nail biter.

They say there’s no such thing as a dead rubber, and when I say “they” I mean the marketers entering a third test of the season two-nil down.

In all honesty though, as a Wallaby fan who was dreading this match at the start of the season, this third Bledisloe Cup match still had the feels of somethings special.  Was it the somewhat improved performances over recent weeks? Maybe it was the special indigenous jersey? Who knows. Who cares. It’s Test match rugby and it’s worth getting excited about.

A week of extremely wet weather was more likely to have impacted the training sessions rather the game itself, such is Suncorp Stadium’s superb surface. Come full time the rain had eased (a little) and the crowd had built ready for what would hopefully be yet another memorable Bledisloe moment.

From the kick off it was apparent the slippery conditions would impact the flow of the game as it made footing uncertain and the ball difficult to handle.

It made an impact early as there were a couple of early handling errors by both teams. The Aussies looked to be the ones to have the first opportunity to score, but a poor pass by Kurtley Beale led to a Marika Koroibete fumble and All Black ball.

Meanwhile the All Blacks were more clinical and cleared their half simply by making strong metres down field with some astute kicks.

The first linebreak came from the All Blacks when Waisake Naholo ran a nice line to slice through the Wallaby defence, eventually being taken down by Beale and the Wallabies were able to scramble out of trouble.

A Sean McMahon dropped the ball from the resultant lineout and the Wallabies were under all sorts of pressure as the All Blacks set a mid-field scrum on the 22m.

But the play would not as expected as Will Genia read the All Black attack to put pressure on the Lima Sopoaga pass only for Reece Hodge to do another Stirling Mortlock impression and snag the intercept to race away for the try. 7-0

When Keiren Read secured a penalty at the breakdown, and then Rob Simmons was pinged for backchat, the All Blacks were able to get themselves into an attacking position via a lineout within 10m of the line. A series of controlled, recycled ball, each phase putting more and more pressure on the Wallaby folding defence, finally saw an overlap to the kiwis. Israel Folau chose to rush the defensive line but left space outwide for Naholoto have a free run to the line. 7 – 7

The Aussie kicking game was aimless and without the chase that could cause damage in the weather.  Minor handling errors, perhaps due to the slippery conditions, were further hampering Wallaby momentum. With the team, across the park, not working hard enough at the breakdown the always on the edge New Zealanders were dominating.

When Sopoaga kicked a penalty after one such penalty, against Rob Simmons for not coming through the gate, bouncing it off the cross bar in the process, the kiwis took their lead to three points. 7-10

The Wallabies were off their game and it doesn’t take a Level 3 coach to know that you don’t beat the All Blacks by playing average rugby. Meanwhile the All Blacks had the match under control as usual and were patiently waiting for their opportunities.

It looked to come when Sonny-Bill Williams stole the ball from Tevita Kuridrani and released his outside backs. The Wallabies scrambled but again the visitors maintained their cool and it was Dempsey penalised for off-side next and Sopoaga kicked the penalty. 7-13.

In the closing stages of half time the crowd was tense as they had too many times seen these All Blacks hammer a nail in the coffin in those closing stages of the half. Instead it was the Wallabies who made it happen as they backed themselves to attack knowing that had advantage from a Sam Cane off-side. Soon enough it was that man Israel Folau who scored his 12th try for the season running onto a Kurtley pass to weave his way through the AB defence and go over in the corner.

The Wallabies were not great but fought hard and would be happy to go to the break one point down at 12-13. 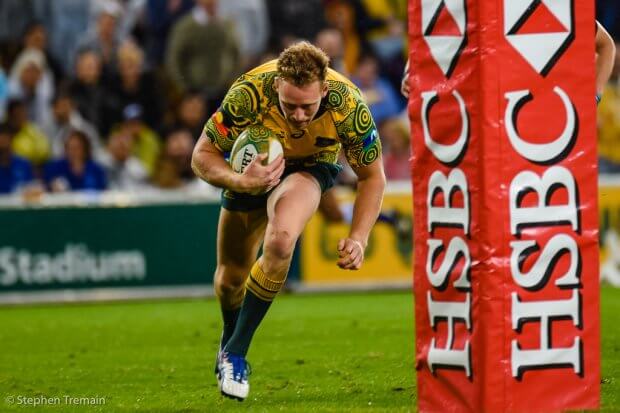 Reece Hodge dots it down after a memorable intercept try early in the match.

It wasn’t an ideal start to the 2nd half as the Wallabies turned over ball and conceded a penalty.  The Wallabies wouldn’t give up easily though as they defended strongly and eventually Beale and Michael Hooper combined to secure the penalty to give the Wallabies the chance to relieve pressure and get themselves into kiwi territory.

Unfortunately Rob Simmons was forced to leave the field after a great deal of concern was shown when a tackle went a little wrong, as young Queensland Red Lukhan Tui got his first cap at home.

The Wallabies ignited from the lineout as Israel Folau, Marika Koroibete and Beale challenged the All Black defence and had them backpedalling. A strong Scott Sio put the Wallabies well on the front foot but a pass fired out by Genia to Beale was spilled and the chance lost.

A big play by Jack Dempsey to secure the turn over, following a good tackle by Tui, gave Foley the chance to kick the penalty and put the Wallabies back in front. The kick was pushed wide and the opportunity lost.

The Wallabies produced the goods through as an initial driving maul put the pressure on and drew the penalty advantage, before they too it wide for Folau to create space and put Koroibete over for another Wallaby try. 17-13

With just 20 minutes to go the Wallabies had a small lead but had looked an improved unit in the second half. Helping was a deteriorating All Black discipline as the number of penalties began to stack up.  Stephen Moore ran on for his last test at home and the hope was he could inspire the team to a famous victory.

When the All Blacks gave away their 7th penalty in a row Reece Hodge stood up and kicked it from close to 40m out to put the lead to a converted try. 20-13.

Sean McMahon put in an incredible run bullocking 50m or so down field and it looked as if the Wallabies could create something again. But a HUGE tackle by replacement prop, Ofa Tu’ungafasai, on Foley stopped all momentum and quite possible his heart for a moment or two.

The All Blacks, the masters they are of sniffing out a weakness, soon were over with Reiko Ioane going over after a wonderful Sonny-Bill offload and a draw and pass by Kieran Read.

Damian McKenzie failed to kick it from the sideline and Australia clung to a 20-18 lead with less than 10 to go.

With minutes to go the All Blacks were very un-All Black in turning over the ball and the Wallabies were able to force their way down field and again force a penalty. Hodge stood up to take the kick and wind down the clock. He absolutely nailed it from his own half and gave the Aussies a five point lead with less than two minutes to go. 23-18.

A late Wallaby penalty gave the ABs a late run for the win with a lineout from 20m out. But this time the Wallabies wouldn’t be denied and a knock on by Sam Cane was enough to send the Wallaby players and fans into joyous rapture. 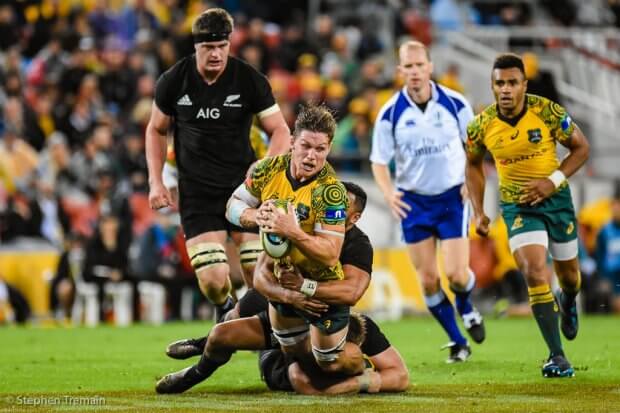 In a game so close it can only be something coming late in the game, and Reece Hodge’s monster penalty shot in the last couple of minutes was a massive play. In reality though the All Blacks poor discipline in the second half really cost them.

Jack Dempsey was fantastic tonight making metres through strong kiwi traffic.  The backrow lifted their intensity in the second half, and Lukhan Tui made a big impact from the bench, but Dempsey was a consistent performer all night.

Kieran Read was very good for the All Blacks while Sonny Bill produced some class to prove doubters wrong.  Reece Hodge deserves more recognition for his big plays with the intercept and two crucial penalty goals. 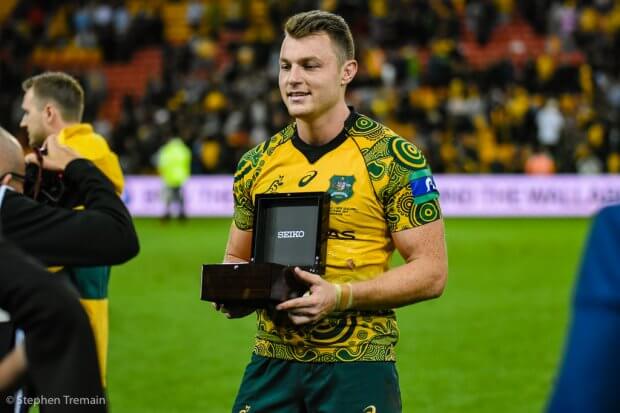 Congratulations to Jack Dempsey on his GAGR MOM Award.