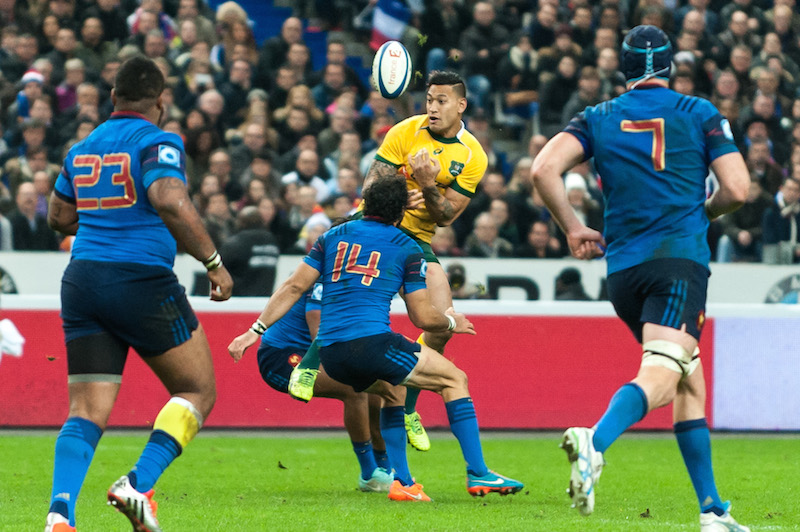 A strong performance from France resulted in a close loss to the Wallabies.

However, the scoreline flattered the Wallabies in the end, and the Wallabies should count themselves lucky that they had a real shot to win the game in the last two minutes.

Plenty of possession but a predictable attack and not enough thrust over the gain line will have the Wallabies working hard before the next game against Ireland.

Here are my ratings:

Part of a strong scrum until Skelton came on. Busy, made the most tackles of the Wallabies. Off at 61 minutes. 7

Was a pest around the rucks and tried hard. Had a few issues at lineout time. Off at 69 minutes. 5

Part of a strong scrum until Skelton came on. Early charge down almost led to a first minute try. Off at 65 minutes. 6

Some aggressive defence, but dropped a ball early that led to a France try. Needed to do more. Off at 49 minutes. 4

A better effort overall. A lot of carries, a few a bit high, resulting in a turnover off one. Scored a try with good support. A few lineout issues, but did steal one French lineout. 6

Lacking impact, gave away a few silly penalties. Highlight was a few strong ruck cleanouts. Off at 69 minutes. 4

Was busy, but lacked his normal impact. An early counter ruck was a rare highlight in this game.  5

Got through a pile of work, with some good runs. One of the few forwards with any impact. 7 and G&GR Man of the Match

Struggled to get the ball out cleanly, usual quick service was not as noticeable. Got clearly frustrated as the game went on. A few missed tackles. Off at 69 minutes. 5

Quade Cooper vintage 2010 like game; except he was too predictable in attack and needed to find some more variety. Too many mistakes in normal play: dropped balls, a charged down kick, and messed up receiving kicks.Set up a try and a late break, plus perfect goal kicking had me dithering over a higher score. 4

Cleaned up at the back, saving a few tries. Not a lot of chances on attack. Off at 60 minutes.  5

Struggled to get into the game. Had a few defensive errors. A disappoint outing after the last two games. Off after 44 minutes. 4

Some strong runs to get over the advantage line, but didn’t get much room.  Looked the most dangerous back for the Wallabies. I shudder to think how we would be going without him. 6

Scored a try, had a late break, but missed some tackles. Not a lot of involvements. 5

A rare poorer game, yet somehow his stats still look good. Uncharacteristically struggled under the high ball, and seems to have been found out a little looking for the outside break every time. A few late involvements bumped up his score. 5

On at 69 minutes. Barely sighted, couldn’t get himself involved. 4

On at 61 minutes. Came on right after the Wallaby scrum came under pressure. Had a strong run, but needs to work harder as a replacement. 5

On at 65 minutes. Dropped the ball to end the Wallabies’ hope of a fight back. 4

On at 49 minutes. So far away from his wonderful debut vs France earlier this year. Poor at the set piece, a stupid penalty, and went missing in the last 10 apart from a key dropped ball.  3

On at 69 minutes. Barely sighted, couldn’t get himself involved.  4

On at 69 minutes. Provided some urgency. No idea what he was doing at that last scrum. 5

On at 60 minutes. Seemed to be on the wing for a few minutes before reverting to 12. Only reserve to provide any real impact. Had a nice catch and offload for Simmons’ try. Looked dangerous. 7

On at 44 minutes. Not a lot of impact, a couple of strong runs and tackles but also a dropped ball. Interesting choice to bring on at 12 initially. 5

What do you think?  Have I been too harsh or too generous?  Tell us below!