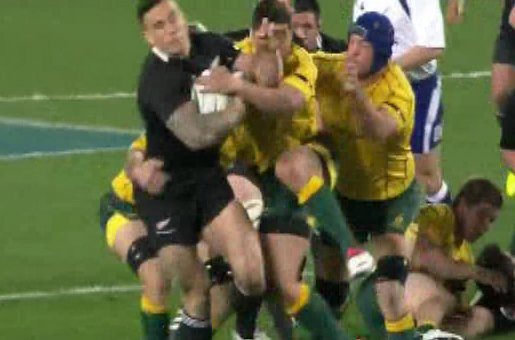 In the final part of my series analysing the Wallabies I’m going to look at the Wallabies’ defensive performance.

The Wallabies have adopted a more defensive game plan over the last two seasons and if I were ranking the areas they’re currently performing best in, this is the one I’d put at the top of my list.

A success rate of anything over 90 per cent in international rugby is outstanding. That normally equates to no more than 15 missed tackles per match.

Those statistics confirm that although further improvement is required with the Wallabies’ defence they have performed reasonably well so far in 2012. As with all statistics we need to dig further to see if there are any issues hidden within the overall numbers.

In 2010 the Wallaby forwards were responsible for 45 per cent of the team’s missed tackles. In 2011 that increased to 60 per cent.

The Wallabies’ backline has missed an average of 20 tackles per match against the All Blacks in 2012 whereas they averaged just 12 missed tackles per match in the series against Wales. Some will point to Quade Cooper and Kurtley Beale as the cause of this increase in missed tackles, and they did missed their share, but they were not alone. Beale missed 6, Anthony Faingaa 6, Cooper 5, Genia 5, Horne 5, Barnes 4, and Ashley-Cooper 4, with Mitchell and Ioane 2 each.

Those statistics show a bit of a mixed bag for the Wallabies so far in 2012. Whilst we’ve restricted the All Blacks to just three tries in the two matches, that’s got more to do with the number of errors made by the All Blacks when in try scoring position.

One of the big threats the All Blacks pose for any team is their offloading game and not just from Sonny Bill Williams. The Wallabies used an interesting tactic in the matches against the All Blacks to try and shut down the offload from wide runners. As you’ll see in the video the Wallabies were getting their outside defender up into the All Black line and into a position to try to intercept any offload.

Whilst Sonny Bill won’t be playing the next time the Wallabies play the All Blacks there are plenty of other players offloading as well. The Wallabies need to make sure the first tackler goes low, and only then can the next player go high looking to shut down the offload.

Tomorrow I’ll give you my summary of where the Wallabies stand at this time, and reiterate which areas need the most attention to achieve the goal of being number one in the world.

STAT ATTACK: Just who are these Saffas?
Wallabies – We Can Fight Back!