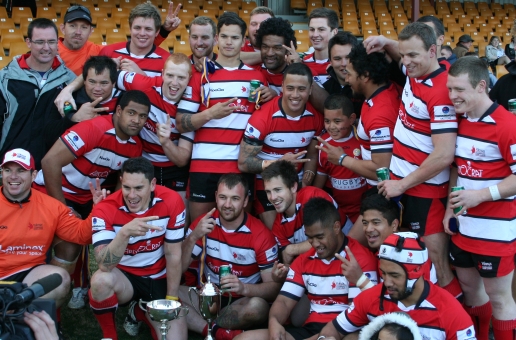 The Tuggeranong Vikings have held off a determined Wests outfit 29-17 to secure their second successive John I Dent Cup premiership.

It was a game of two halves. Vikings looked like they could run away with it, but a determined second half from Wests made the Vikings work hard for the win.

Vikings opened the scoring in the 14th minute with a try to captain and scrum half Beau Mokotupu after sustained pressure near the Wests line.

They almost added to their score in the 20th minute but lost the ball forward right on the line, much to the relief of the Wests players.

They weren’t to be denied though, and right winger Jerome Niumata finished off a neat backline move to score in the corner to extend their lead to 12.

Wests weren’t able to get into the game and spent too much time in their own half, even though they had the wind at their backs and were making the majority of tackles after a promising start. The inclusion of Wallabies centre Pat McCabe wasn’t as effective as they’d hoped as he had very limited opportunities in his 30-minute appearance.

They finally got on the board with a long-range penalty goal to fullback Jesse Mogg in the 31st minute after previous visits into the Vikings 22 had come up empty.

The tackling seemed to get to Wests as the Vikings applied further pressure by declining an easy shot at penalty goal and went for a scrum inside the 10-metre area. Vikings flanker Tim Cree was able to dive over for his side’s third try of the half.

Wests had their best chance to add to their score with a scrum just short of the Vikings line, but a turnover ruined that chance and the teams went to oranges with the Vikings up 19-3.

Wests came out fired up for the second half and Brumbies player Peter Kimlin scored under the posts to get his side back in the game. Mogg converted to close the gap to 9.

Their next points came in bizarre circumstances when Mogg had a shot at penalty goal that missed, but Vikings fullback Brendan Taueki inexplicably and dropped the ball to give Wests a 5-metre scrum. A simple move at the back put Wests flanker Chad Joseph over in the corner. Mogg’s excellent sideline conversion reduced Vikings’ lead to just 2 points.

As the game wore on, Wests looked the better of the teams as their forwards got them back into the game with aggression at the breakdown led by Peter Kimlin that was stifling a frustrated Vikings side.

Vikings finally got on the board in the second half in the 65th minute with a 40-metre penalty goal from fly-half Zack Holmes that gave his side a little more breathing space at 22-17.

As the clock ticked down, Wests looked the more likely to score but excellent Vikings defence held them out.

With just minutes remaining Zack Holmes took things into his own hands and from a backline move 40 metres out, sliced through the Wests defence to score under the posts, putting the game out of Wests’ reach.

Man of the match: James Turner

Special mention also the half-time streaker who showed great poise and flair with the cartwheels and evasive skills to elude the security.