G&GR’s coverage of the Brisbane, Sydney and Canberra first grade comps returns herewith. If you’ve missed the reports lately, I apologise. My plate got over-full for a while.

The result of the Easts–Brothers match was fitting: the first-placed Tigers are just that bit better than their nearest rivals. The Breakers’ good win over the Magpies was the only surprise from the other matches. 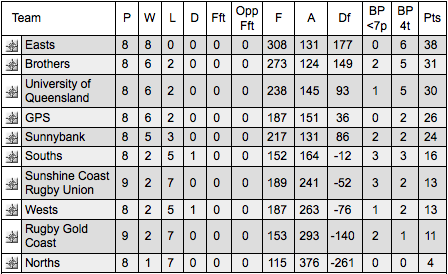 The top four avoid each other this week and they should all register wins against their lower-ranked rivals; Sunnybank and perhaps Souths will be looking to test themselves against the big guns.

Way back in April before the Premier season kicked off, Gold Coast and Sunshine Coast played a match at Stockton Park as part of the Queensland Country Championships, and it was agreed that game would also constitute their Premier Rugby Round 9 clash. Sunshine Coast won 20–nil. The two clubs get a bye this weekend and the slight glitch in the table will be ironed out at last.

Next week (Saturday 2 July) the competition takes a break. Round 10 comes around on Saturday 9 July.

In recent weeks it had looked like Norths were working on building a reputation as flat-track bullies as they gave hidings to Warringah and Parramattta. Then this week they hosted the unbeaten Eastwood and came within a whisker of pulling off an upset; a yellow card left them unable to protect their lead in the last ten minutes. The Woodies had also been notching up easy wins against the bottom teams and perhaps took the Shoremen a little lightly. The Two Blues registered their third win at the expense of the Rebels and the Pirates put Gordon to the sword. The Beasts and the Students got the expected wins (although the Emus dominated the first half of their home match) while the Wicks and Marlins staged one long arm-wrestle that could have ended in a draw, had an after-the-bell conversion attempt been successful. 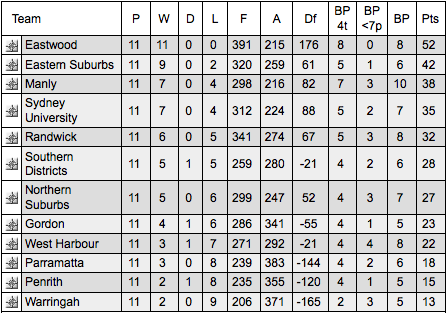 The main interest this week is seeing whether Norths and Souths can make an impact in their matches against the competition’s heavyweights. If they can’t, a gap will open between the top five and the rest. And what of poor old Gordon? The team that seemed to be eyeing a top-four place two months ago is now flirting with the other end of the table. The weeks ahead look relatively easy for the Highlanders so now is the time to start saving something from 2011, the club’s 75th anniversary year.

Speaking of the weeks ahead, the Super players are due back…

What’s become of the Owls in recent times? This loss to the Eagles followed thumpings from Wests and the Whites and then an embarrassing loss to Easts. They last won a match in Round 6, and they’ve been passed on the table by Royals — thanks to a couple of BPs, and that good win against the Whites. Of course the big news was the Lions’ loss — their first for the year — to the Vikings, who also have a recent win over the Eagles on their scorecard. The top of the table is an interesting place at this stage of the comp.

The Owls need very badly to win a game, but they’re up against the red-hot Vikings. Will the Lions pull themselves together, or can the Royal Blues carry the fine form that saw them run all over the Whites? I won’t try to guess. The Eagles will be confident as they visit the Tricolours, who have been doing better in recent weeks but still have just the one win for the year. The Whites have the bye, which they’ll appreciate because they face Gungahlin and Tuggeranong in the weeks ahead.