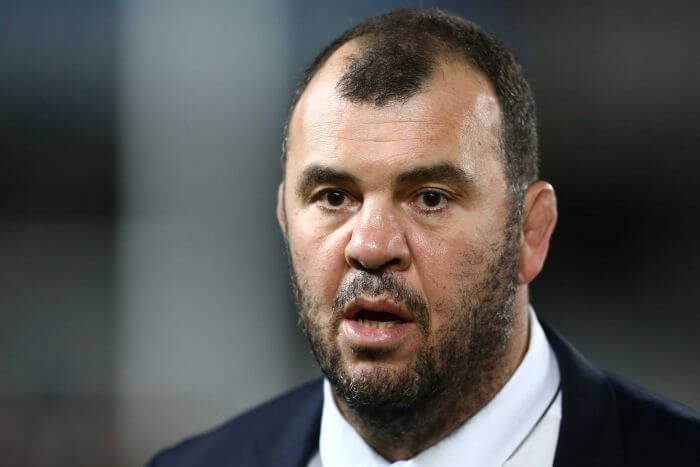 Alright, so here we are on the end of another shellacking. What could be fixed in terms of Wallaby performance has been covered pretty well in other articles. Overall I think it was some of our best rugby of the year, despite us maybe getting a bit of rough from the TMO.

After containing my angst quite well to post in The GAGR Forums about this, I’m going to discuss the incident involving the Speight non-try, and not in the way you might think. 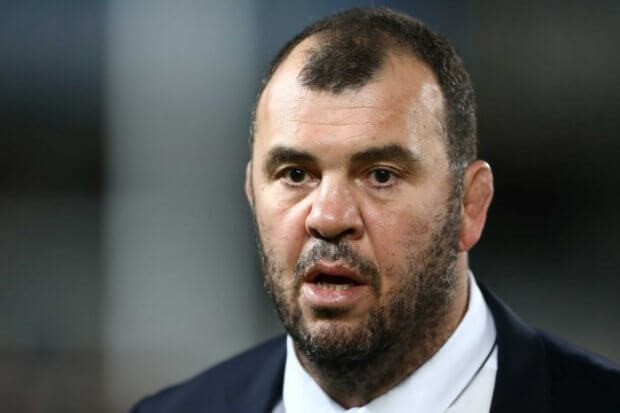 The call from the TMO to review and subsequently disallow the Speight try is in the book, and there is nothing we can do about it.

Cheika said himself after the game (and I paraphrase): “its a turning point if we lose by one score, perhaps…”

However, it does raise some interesting questions about the TMO Protocol, particularly as they relate to the extent of powers, and effect on the game.

The TMO Protocol is on the World Rugby Laws site, and to save you the time reading it, I’ve cut the 5 pages into the important bits (yep, I’m a top bloke).

It is firstly important to note that the actions of the TMO hinge largely on the available technology. In most Test arenas, particularly for competitions like RWC, 6N, and TRC, these are requirements of the broadcaster, so are negotiated to a high standard for the viewing public.

It is also important to note that the broadcast or its director are only mentioned three times in the document: in 1.5 in a liaison role, in 1.6 in terms of providing all angles available, and in 1.10 relating to putting images on the big screen as part of the review process.

What the Protocol doesn’t state in any capacity is any restriction or responsibility on the part of the broadcaster as it relates to influencing decisions.

Probably the most memorable incident of this for me was the England v Fiji RWC2015 opener, where Fiji looked to have scored an excellent try before the big screen showed Peyper a knock-on (fast forward to 1:15).

At the time, that was quite controversial, and not just because we all hate Poms ;)

It was the demonstration of power that a broadcaster had to get a home town decision at a crucial moment. Stick it up on the big screen, get the crowd to bay and holler, and get the ref’s attention. That is an important fact when considering the way the Protocol is written, because if you give the director enough time (see below about conversion kicks), you give yourself enough rope.

In this case, it was the correct decision. As with many arenas, technology is good or bad, depending how you use it.

While we’re moving that direction, here are the summary bits from the Protocol, relating to Dayne Haylett-Petty’s actions: 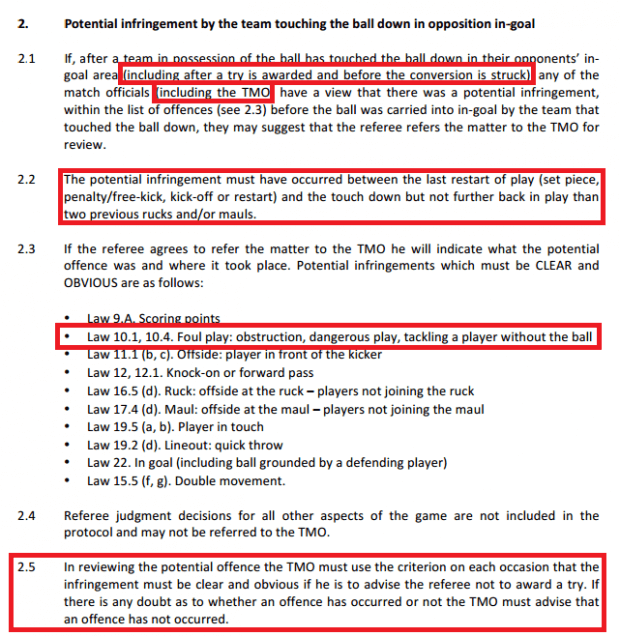 All fairly cut and dried. In the opinion of the officials, with no doubt (2.5), DHP obstructs a tackler as per section 2.3 above, try disallowed, penalty All Blacks.

Keep in mind the part in 2.1 about what I call the interval of decision which is “.. after a try is awarded and before the conversion is struck.”

In the context of most games, this is much more important to the outcome of the decision.

That interval might only be a few seconds if the kicker scores under the posts and takes a drop goal for conversion.

It might be a minute or more as the kicker walks back, waits for the tee, then has another 60 seconds to knock it over. A very important kick from wide out might take up to 90 seconds between try and kick.

The interval that the TMO has to adjudicate on is highly variable – even inconsistent. And that is going to give you inconsistent results when you apply it.

Looking also at point 2.2, we see how this part of the Protocol operates in terms of what I’m referring to as interval of adjudication – “not further … than two previous rucks and/or mauls”.

This seems like a fairly sensible parameter to adjudicate incidents affecting the outcome. It means we’re not going back and wasting whole minutes of game play, and yet we should still get a decent window of finding the perpetrator, judge the crime, and move on accordingly. In fact, I thought it was only one phase, which IMHO is quite enough in most cases. But two it is.

In this case, the interval of adjudication started with the Wallaby scrum inside their own half at 44:40 by the TV clock. Only one ruck-thing was formed between that scrum and Speight getting to the in-goal at 45:20. No mauls. One other tackle-thing which didn’t form a ruck.

As we have the luxury of the TMO spotting infringements back to the last scrum, we can roll the tape back a bit.

The next major action is obstruction by two All Blacks on DHP. Ironically, the first is from Savea, and then another by Read. 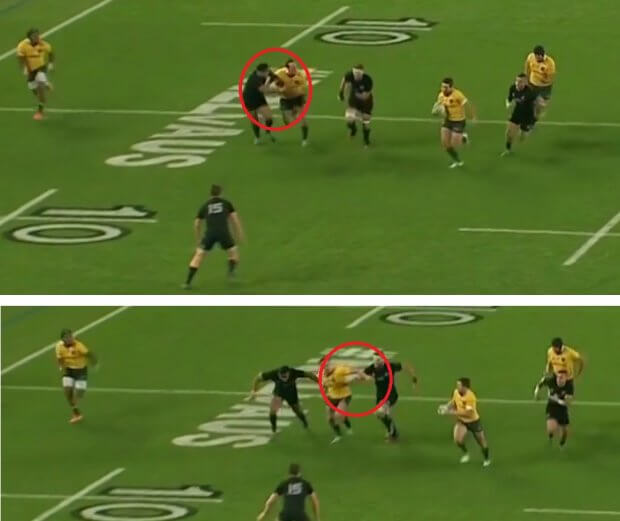 These two infringements are adequately covered in section 3 of the document regarding the defending team. I’ll let you read it, but it is pretty much the same as Section 2 for the attacking team… though, strangely, has only 5 points compared to Section 2’s 8 points. Because rugby Laws are just weird (?).

Are these incidents – which are identical under the Laws to what DHP did – somehow less in terms of infringement because they occurred a few seconds earlier? Is the intent of the two players any different? Doesn’t look like it.

Therefore, you could easily disallow the try because of the last obstruction, and go back to these two obstructions before. Result is the Wallabies get a penalty just inside the AB half. That’s consistent and fair, and easily explained.

In this case, its simply because these two incidents didn’t register with the TMO. The more visually apparent change of line by DHP is the one scrutinised, and he has to think hard about “Enough Rope” for next time.

The Fourth Leg of Protocol

As a last point, let’s consider all I’ve discussed in conjunction with the section of the document regarding foul play: 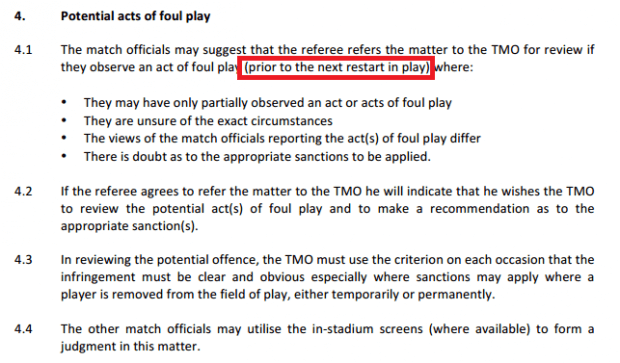 I’ve highlighted the only bit I can find about a time interval i.e. prior to the next restart in play. There is no direction over whether this overrides the other parts of the Protocol, or whether this purely to be considered under the same guidelines as Law 10 Foul Play taking precedence over other Laws in the opinion of the referee.

Do we have a situation where the Two Phase limit of Section 2 can be overruled by Section 4? Perhaps. How far down the Foul Play route do we go before deciding some Foul Play incidents merit more investigation than others?

Its a bit of a slippery slope, and really, we’ve never had a great TMO system that everyone is happy with to date.

The Moving On Bit

Do I have any answers?

Well, I might change the Protocol to force a review of all incidents in the last two phases, but that might be whole minutes of game time. I think definitely if the TMO is going to spot something after a try is awarded, then its probably safe that he go back at least a few seconds before his first instinct, to ensure something else hasn’t occurred.

Maybe that could work if we also bump the Protocol to ONE phase maximum. Already I can see that is going to lead to controversy…

I’m a big fan of the challenge system, where each Captain gets a shot at one review per half. Under this system, the TMO just sits there until he’s called upon – kind of like in cricket – and gives a specific decision. That may still be overridden by foul play incidents of course.

Like with cricket DRS, it would also make the Captain look at the game situation and decide whether it was worth using his one challenge per half.

These are only minor things, though. Its a tough job trying to get everyone making everyone happy in a world with instant replays and microscopic HD super-slowmo.

Perhaps the real issue to address is home town broadcaster, which as I said above is not adequately covered in the Protocol.

I think the next logical step for World Rugby is to ensure there is some kind of consistency around how the broadcasters replay incidents on screen. Particularly scoring incidents.

If everyone is getting the same treatment, home or away, then consistent outcomes are more likely.

“Hey Alain, do you think Pfitzy might be onto something?” 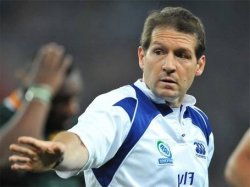