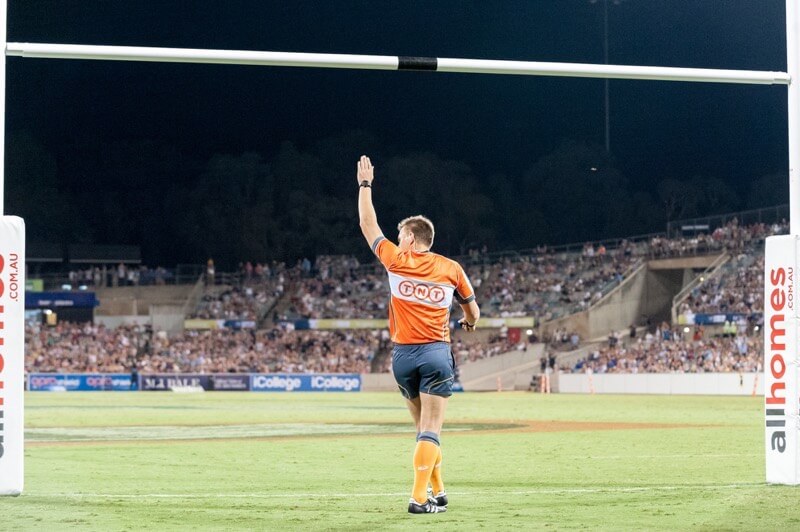 Splitting this into 2 actually worked out well as I have been able to add a bit based on what people said after the first one. Hopefully this adds a bit more context to some of what I said in part 1. Enjoy and looking forward to the comments

One of the big emphasis, especially in New Zealand, for referee training is the application of the laws of the game during a game. We are taught to look at both the technical and tactical aspects of applying the law during a game. The main reason behind this is that because there are so many laws, there is always something that a referee could make a call on. A referee who only looks at the technical application will be blowing the whistle at every collision and the game will quickly become a very boring stop/start game with endless scrums, penalties and lineouts and probably, a very low scoring affair.

Referees do the job because they enjoy the game and, like the players and spectators, they want to see an open game with lots of movement and play. This means they look at what is going on and try to make decisions based on what they see has the most material effect on the game at that time. A classic for me was in a semi-final where a team defending a lineout didn’t jump to contest the ball. While the ball was not thrown in straight, I ignored that rule because the fact that the defending team didn’t contest the ball in the air meant that the crooked throw didn’t affect the outcome. The attacking team were going to win the ball anyway, so why stop the game in that situation? The defending coach was unhappy because their team let in a try that decided the game, but he did eventually agree that the ruling on the lineout was fair.

This leads into what is sometimes the most controversial part of the refereeing game. Players, spectators and especially commentators all talk about wanting consistency in refereeing. The trouble with this is that when you are applying the law tactically the result often seems inconsistent. For example, a player who is offside in the backline is clearly breaking the law. However, where the play develops in a way so that them being offside doesn’t affect the play the offside is often not called. At other times where the player is affecting the decision making of the attacking team, and sometimes not by being in play but just being in the way and making the team change their plan, then the player is called up. All that can be seen by the spectators and commentators is a player offside and sometimes getting away with it and other times not getting away with it. This is then brought up as inconsistency by the referee.

What the spectators don’t always understand is that often a referee, especially an experienced one, will see where a team is planning to move and understands the impact of these players so while the result looks inconsistent, it is actually a consistent application of the tactical aspect of the law.

The other inconsistency is the apparent difference between the application of the law by different referees. This is one that I actually agree with but rather than a difference of application, I see it as a difference in the way a referee moves, and so they are often seeing different things and so making different judgement on different scenarios. I am absolutely certain that if two referees are seeing the same thing, they will rule on it the same way. However, due to a lot of reasons you will get one referee around one side of a ruck and another around the other and so their adjudicating will be different. 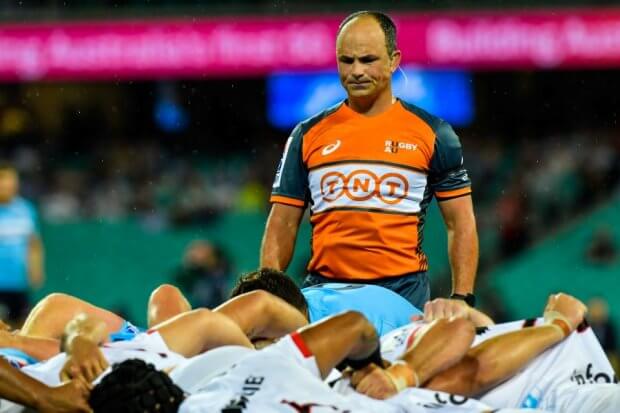 One of the most common comments from spectators is that referees make decisions on the scrum by guesswork and that they have no idea on what is going on. In my mind nothing is further from the truth. Referees spend a lot of time with some very good coaches on the scrum. Even in my first 2 years of refereeing I had Bryce Lawrence come in and spend 2 days on just the scrum and what each player is doing or trying to achieve when they are in an attacking or a defending scrum. Top referees spend even more time and sit down with scrum coaches to understand what is going on. The referee also has the best view of the scrum. While the overhead camera shows more than the side camera, what it still doesn’t do is give a 3-dimensional look at the scrum, so while it might clearly show a player on an angle, it doesn’t show what else happened to get that angle and what was happening in the scrum. The referee being so much closer can see the top of the scrum, and the work being done inside by the Props and locks. I am totally convinced that most referees know more than the players at times on what goes on in the scrum and for the most part they get the calls correct.

The Introduction of the AR and TMO has been an interesting one to follow. TBH it is so far removed from what I referee on a daily basis where I sometimes have an AR from the club but usually only a touch judge and except for finals never even have communications with the AR’s I do get that I am not able to provide a lot of context. The biggest issue seems to be that there is no clear directive on what the TMO is to look at and what they shouldn’t look at. I personally think that in most cases they go too far and have too much influence. From what I recall they were originally only called in to look at the try scoring moment, then they were allowed to go back 2 or 3 moves, then look at foul play, and now they seem to have morphed into a beast that interferes with far too much and causes delay for delay’s sake.
It is an interesting balance as I’m sure that while everyone hates the TMO, they are more than happy to accept him bringing something up that gives their team an advantage, especially if it turns over a score against them and this will unfortunately ensure that it continues.

There is also a difference between the application of the law brought along by directives from the unions on where they want the emphasis placed. We saw this recently with the direction on high tackles and this was a bit of a mess. There was a very good article on the Roar (not all of it is bad) where a writer looked at how different countries had applied the directive from World Rugby on the application of the current law on offside, entering the ruck, securing the ball and remaining on your feet in a ruck. Most countries accepted the increase in penalties and cards as a consequence of players having to learn to play differently and after a season or so the players and coaches did adapt, and these penalties and cards became less. These changes also had an effect of speeding up the game and making players have to learn how to react faster, make faster decisions and use the ball more.

Unfortunately, in Australia there was a big push against the penalties and cards from spectators, commentators and the media who didn’t seem to understand that the players and coaches would take some time to adapt. The hierarchy managing the game here feared that this would further reduce the spectator numbers and that the game was taking so many hits this would be very bad for the game. They changed the application and referees here do apply these laws differently. How much of an effect this will have on international rugby is yet to be determined but the Roar article suggests it might be bad. Here is a link to the article The rest of the rugby world has left Australia behind (theroar.com.au)

So, in conclusion to this rather wordy piece. Yes, referees make mistakes. I don’t believe there are as many mistakes as some people believe and I don’t think that the mistakes have as large an effect on the game as some people would try and have us believe. The game moves too much for a decision to have a lasting effect and invariably there are other decisions by payers before or after the referee’s one that have a far bigger impact on the winning or losing of a game. Not everything you see on a TV or from the sideline is going to be the same as the referee and he/she will often have a greater appreciation of all that is happening and from seeing a different picture than you have may make a different decision than what you’d expect.
The rules for the game are complex, however this is because the game itself is complex. There is not a great need to change any of the rules, all that is needed is that the ones that are currently there are applied properly. Doing this will provide the space needed for teams to execute properly and to speed up the game.
And in accordance with Law 6.5.a. the referee is actually correct even if he seems wrong so HA!