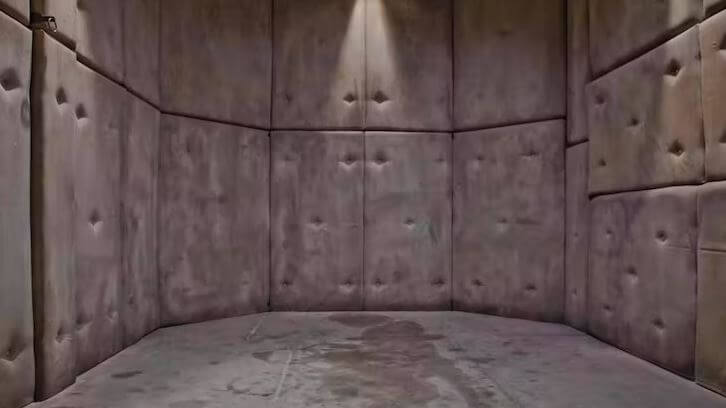 As I stop walking, I peer up and down the yellow lit corridor a final time and with shaky breath I try and swallow the knot of fear in my throat. The familiar sickly sweet aroma of decaying rodentry pervades the dank walls around me and I feel more than smell the mould, while the piercing clarity of dripping water blends unseen with the oppressive dank that cloys my lungs and chills my soul.

Is this where I end my northern tour?

As I turn to my task, the now familiar ball of uncertainty starts growing in my belly, expanding outwards until it seems to engulf what little courage I have left. Thus I grasp the startling cold of the steel latch and lean my shoulder into the metal-banded door. And with the tortured squeal of hinges unused, the prodigious portal swings ponderously away as I hunch to squint into the startling fluorescence of the fabled padded cell beyond…

Context: The Wobblies have had an abysmal northern tour, punctuated with what ‘could’ve/would’ve/should’ve been’ performances, to record only a solitary 1pt win over the Scots in their last four test matches. Will the walking wounded go home with 1 from 5? Or will they salvage a win, and likely Dave Rennie’s job, to double down and make it a 2/5 tour?

The Boyos are in similar disarray. With one win and four defeats, Wales finished the 2022 6Nations Championship in second last place with only lowly Italy performing worse (Oh… wait… Cachu). And they have continued their horror 2022 with 2 defeats from 3 starts in this year’s November tests including last week’s disastrous loss to Georgia (not Romania). Coach Wayne Privac must surely be down to the quicks of his fingernails.

Let’s get it on in the comments below…

Oranges – Wales had the better of the half in both possession and field position and so lead in 20-13. The Wobblies had some, but not too many chances and as per the tour so far, haven’t really capitalised on the chances they got. The late half cheese to Gordon led to a series of Welsh fed scrums on the Wobbly 5m and even after 3 scrum penalties to the reds (and a scrum yellow warning), the Dragons still couldn’t capitalise – so the Wobbs dodged a bullet there. The Wobbs discipline is markedly better than previous weeks. MarkyN and Gleeson having great games. McReight getting ragdolled a lot. Should be a cracker of a 2nd half.

Full time: Well bugger me… 34-39 to the Wobbs in the end. The unlikeliest of comebacks. I have to check, but it’s the biggest come back I can remember for the Wobbs from 20-13 down. Huge game from MarkyMark. Him and Frosty are finds of the tour. Pete Samu came on and made an immediate impact – why isn’t this guy the starting 7 is beyond me. Hodge was solid but unspectacular at 12 and I’m sorry to let my bias show but great effort from Lolly who came on and handled everything with poise and purpose. Lachy Lonegran went from hero (try) to villian (potential match losing penalty) to match winning hero (making the crucial steal). Wales lost their shape and enthusiasm as the match wore on and the Wobbs finally started to play a bit in the last 15-20min as we got great impact off the bench. Great scrummage from Talakai on debut and good referee recovery from Dr Tom.

I think penalties were 12-13 by the end. So a clear Wobbly improvement there to not be in a penalty hole.

But in all seriousness, given Wales were down to 13 men in the end, the Wobblies needed to win that. But thank the Big Man they did. 2 from 5 for the tour and a win like that before the Christmas layoff is a far better place to be than 1 from 5 going into the Bill year. Hmmm…