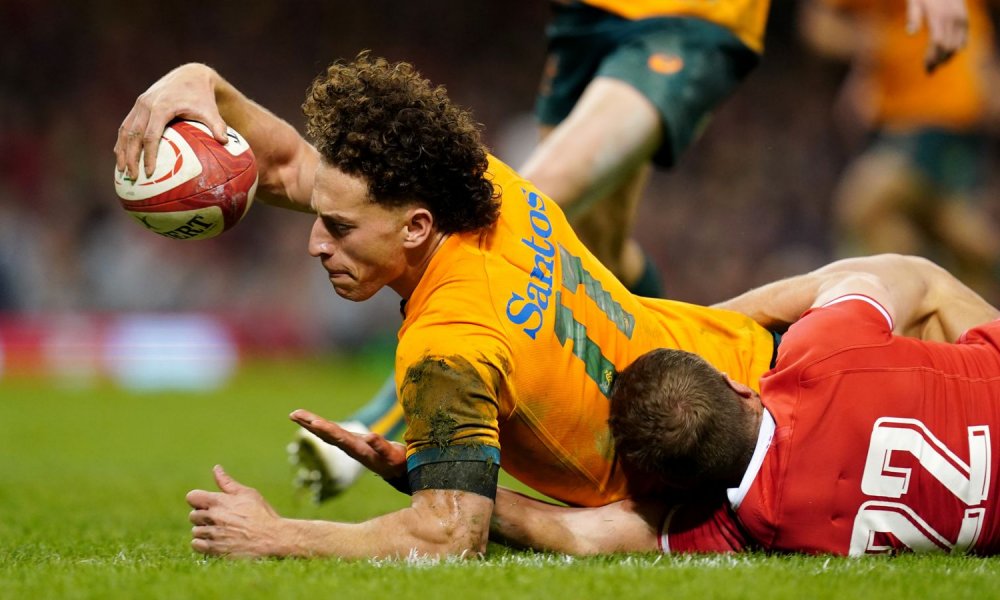 Greetings, G&GRs, and welcome to the Monday News for this week!

Firstly, this will be the last major week for the G&GR “Craparazzi” as, well, we’re all fuqed and running out of things to say and write about. So, we’d like to offer up the chance for dedicated G&GRs to contribute one-off works in the first week of December. I know that Keith will be forced into might make a return, and there have been some others that have been bullied positively peer pressured into probably having a crack – AllyOz, ME, OLSL, I think. if you’ve written before or have never written for the site, well, if doesn’t matter. Have a crack!

“How will this work, Chuck?” I hear you ask. If you’re interested, email your piece through to Sully at – sully@greenandgoldrugby.com – by stumps on Sunday arvo and we’ll take it from there and post on your behalf. Please make sure you add your G&GR pseudonym so we can plagiarise credit you with your work. Now, in terms of what you can write about, anything goes! Shit, we let Hoss do whatever that Friday malarkey is so hit us with anything decently rugby related. Whether it’s hard-hitting investigative journalism, a yearning for a bygone era, how you rucked the shite out of some bloke then caught up over brews back in 1960 or simply an opinion piece, all are welcome.

In today’s works, let’s wrap up the last match against Cymru and then sum up the entire Wobbly season, a review of the SDs v Bokke match, a Christmas list for rugby in 2023 and, finally, reflect on the passing of the great Doddie Weir. Happy Monday!

Well, folks, what a way to finish off the 2022 season with a win against the Taffs. Never mind that we looked more rooted than a sheep in New Zealand Wales with 20 minutes to go, it was brilliant to see the Wobs (FINALLY) take their opportunities in this match. Now, this has a slight double meaning, as it was as much to do with players who have seemingly been written off by the coaching staff that really shone through as well as the opportunities in front of them on the field. That said, even if the Welsh were going full Gordon ‘n’ Fainga’a with their taste for cheese in the last 20 mins, the Wobs still had to go out and actually put the points on the board. We’ve seen, on countless occasions, teams galvanise when their backs are against the wall (Wobs v Frogs post-Marika, anyone?) and teams lose the plot when suddenly presented with acres of space and no ‘heads up’ thought on how to use it. But they did, and it’ll hopefully be a(nother) turning point for Rennie’s men.

After a pretty dismal first 60 minutes for the Wobs, with European cheese tourist, Jake Gordon, sampling the finest Mr Carley could muster (accurate and fair) and Doctor Robertson joining him shortly after as adjudged to be the player bringing scrums down (“the next one will go” – challenge accepted by the orange men). Further, and unsurprisingly to anyone outside the coaching box, combinations took time to settle, and defensive reads went awry (looking mostly at you, Hodge and Petaia, and Gleeson and Donaldson as well, but can’t blame them really). Credit where it’s due though as the orange men stuck to it. A noteworthy moment was the final play of the first half, when a 13 man Wob side held the Taffs up. Boy, would that turn out to be a crucial moment in the match.

The final 20 minutes was certainly a lesson in “fuq you, coaches” from other seemingly forgotten or underutilised/played players. In particular, the Brumby trio of Samu, Lonergan and Lolesio (been saying his name for months) as well as the introduction of Tate McDermott, sparked the Wallabies to a memorable win, chasing down a mammoth Welsh lead to take a victory! Huzzah! Well done to the remainder of the bench on their impact in a winning game (even Flanders). Were they all perfect? Nope. But they got the job done in spectacular fashion.

Now, that’s not to say that the starting XV were terrible in this match. There were some particular standouts, including 7As, Nick Frost, Cadeyrn Neville, Len Ikitau and Mark Nawaqanitawase, and some relatively steady efforts (albeit with the usual gremlins) from Wright, Hodge, Petaia, Gleeson, McReight, Holloway, Slipper and Fainga’a (only because he wasn’t cheesed in this game… still don’t think he should be anywhere near orange next season). Donaldson showed exactly what we knew he would and can’t really be judged on facing the music like that. Then there’s Jake Gordon. For a bloke who is so highly rated in the Waratah set-up, “by jingo, by crikey, strewth cor blimey, dingo ate my baby, throw another prawn on the barbie”, he’s having a northern tour to forget. Aside from his discipline, his speed and service simply hasn’t been there. If Ryan Lonergan (or another half) can have a storming season, Jake might find himself enjoying ‘le fromage’ as a RWC spectator.

WHERE TO NOW FOR THE WOBS?

At the end of the autumn internationals the Wobs sit at 2-3. When we reflect back on what a ‘low pass’ would look like from the Internationals, this was probably it. Now, I think we all have to do a bit of thinking here. Was it all good? Hell no. Was it all bad? Definitely not. But, like the baby bear’s porridge, it was right in the middle and indicative of the season as a whole.

In terms of results, 2-3 reads like a kick in the sack. When factoring in that one of those losses was to the (fast-improving) Italians, who we really should’ve beaten if we’d bother to turn up, as well as finishing a ‘losing tour’ with a positive points differential (+1, really sums up the tour!) then it can be hard to reconcile the bank balance. Factor in games that probably ought to have been won against the Frogs and Oirish on this occasion, some significant injuries to some key players and the probable confidence hit to some young players who have, from the outside, been treated appallingly, well, it’s been a tough season indeed. Looking at the year as a whole there’ve been “almost turning points”. From a win against the SDs, a win against the Bokke, then losses to the same sides straight after, losses against the Nearlies, Frogs and Oirish, and some absolute brainfarts against the Kiwis in Melbourne and then the Italians allied with an injury list as long as I’ve ever seen in any professional sporting environment, well, we definitely haven’t peaked. In fact, we’re far from it!

Sticking with the injury list, it may be a blessing of sorts in deep disguise. No other team on the planet has had to blood so much talent (I use that word liberally for some players), by choice or otherwise. The experience for some of these players (except for poor Noah) can surely only be good, right? We have found some stars hiding in plain sight like Frost and Mark N, others have solidified their place like Nic White (annoying as he is), Cadeyrn Neville and Samu, while others have lost brownie points (some significantly more than others) like Gordon, Fainga’a, McReight and maybe even Hooper to an extent.

And therein lies the promise of another rugby season in 2023. As frustrating, as promising, as gut wrenching, as wonderful, this Wallaby season has been, I’m still keen for more! I must be some sort of sadist, even more than I am now.

The 2023 Super season really ought to be a long trial for RWC2023. Players have had the taste of international rugby; they should know they’ll have to step up and earn their spot; others know they’ll have to stay ahead of the pack to stay in the squad. That’s precisely what we need to ensure the best* XXXVI board the plane to France in September.

*assuming the coaching staff give themselves an uppercut for some selections…

Now, unlike some of the other Craparazzi, I’ve been a relatively good boy. In fact, I only handed out the Ref Sook Cards cheese to those who deserved it, made it through the rugby season without getting injured and managed to survive another year as a G&GR writer without getting sued #KickingGoalz

That all said, I have some Christmas demands wishes for 2023:

As RugbyPass reports, England limped to the end of their autumn internationals with just one win from four tests as a 14 man South Africa coasted to a 27-13 win at Twickenham. This loss heaps pressure on head coach Eddie Jones, who joins Wayne Pivac and (now to a lesser degree) Dave Rennie in being up the proverbial creek without a paddle.

“The manner of the 27-13 defeat to the Springboks has English rugby fans concerned, with fans saying they are ‘devoid of ideas’ and will ‘make up the numbers’ at next year’s World Cup. They were outclassed in ‘every area of the game’ and struggled to put points together when the Springboks went down to 14 men for the final twenty minutes, repelled multiple times from the maul and turning the ball over on the goal line. The loss was described as the ‘worst since 2015′ when Stuart Lancaster lead the side to a pool stage exit at their home World Cup, leading to a clean out and the initial beginning of Jones’ era.”

I watched the first 20 minutes, got bored and watched something else. The ‘Rassie Effect’ is still in full swing as the game was so fuqing slow. Trainers, medics, physios, water carriers and the kitchen sink seemed to invade the pitch like a swarm of locusts as soon as a back had a hair out of place or a forward suffered a legitimate rugby injury. I almost fell out of my seat in shock as Guds Gardner announced the (fuqing ridiculous) water break after 10 minutes! Alas, with the pressure on all referees after multiple cases of Rassie, it seems that the lesser of two evils (i.e. not have yourself and family subjected to death threats and torrents of social media abuse) means the Bokke are back to playing a low cardio threshold game. Bah humbug.

Finally, on behalf of G&GR readers, we pass our condolences to the family of Doddie Weir and to the Scottish Rugby Union. A true legend of the game and a warrior against one of the most horrific diseases known to mankind. He’ll be deeply missed.

For those who’re in a position to do so, please donate to the My Name’5 Doddie Foundation. Link is copied below:

How to Donate | My Name’5 Doddie Foundation (myname5doddie.co.uk)