While some may be writing off the Sydney Rays, this team has the potential to be the big improvers of the NRC this year.

Having teams like the Sydney Rays in the competition is why the NRC is so important. The Rays are real battlers, with most of their talent stemming from the heartlands of club rugby. They are a side who, despite mixed success, have already started to build a great culture with the backing of the club rugby community on the Northern Beaches. With one of the most exciting backlines in the game and their never-say-die attitude that came through so often last year, the colourful Harlequin jersey certainly has left an impression everywhere they have gone, even though they finished 7th.

But, judging by the success of Northern Suburbs (coupled with a strong season from fellow Rays club Warringah), and with the squad they have announced, this year there is huge potential for the Rays to improve on the previous two seasons.

2016 marks the first time there will be a changing of the guard in the Rays coaching group, following Geoff Townsend finishing at the end of 2015 after after two years at the helm. The position initially went to Manly coach Damien Cummins before finally settling on Norths coach Simon Cron.

And in my opinion, Cron is a man who can take the Rays places in 2016. If there was a sign of the potential of the Rays, Cron certainly personifies it; having been named the 2016 Shute Shield Coach of the Year and guiding Northern Suburbs to their first premiership in 41 years. That ain’t no mean feat.

Cron with further be supported by the likes of Julian Huxley, Warringah’s head coach.  Both the coaches have made it clear that they want to make a clear identity for the Rays this year, and with both of them heavily respected by the players of their respective clubs, they may go a long way to achieving that. 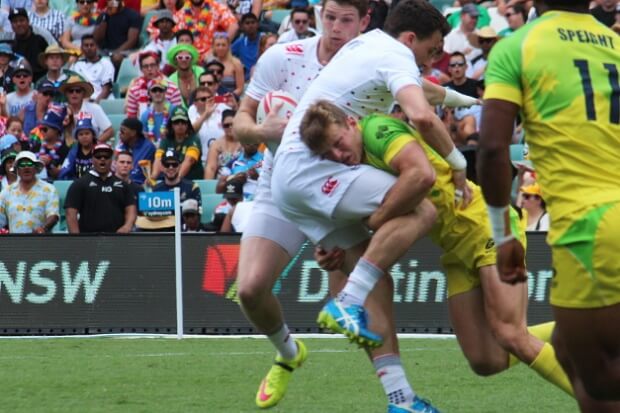 Cam Clark will hope to use the NRC as a stepping stone from 7s to a 2016 Wallaby jersey.

Contrary to previous seasons, this year certainly has a lot more a Super Rugby flavour to it, with five contracted Waratahs lining up (and a sixth future Waratah in the recently signed Aussie Sevens player Cameron Clark).  Clark is one of three Aussie Sevens players also bringing their experience to the squad. Throw in 11 Premiership winning players from Norths, six Marlins, four Rats, two from Southern Districts and one from Eastwood, and you got one imposing squad.

The Rays have taken a big risk enlisting three sevens players into the 15-man game, but it is one that could pay off big time, given the pivotal influence that Sevens star Josh Holmes had directing the Warringah Rats around the park this year. While the Holmes brothers presence is missed, the void will be filled well by Waratahs halfback and skipper Matt Lucas, who will benefit the club immensely with his Super Rugby experience. The addition of more Super Rugby players from previous seasons should also greatly increase the competitiveness and depth of the Rays, with their presence being pivotal experience for the club players who have made it into the squad.

Sam Lane is one notable recurring face who has the potential to get heads turning at the Waratahs this year. The Marlin had a breakout performance for the Rays last year, and his presence at set play coupled with awesome ball carrying skills make him a strong attacking weapon for the Rays. In terms of new faces, one notable player that sticks out is Harry Jones. A Ray in 2014, the Warringah Rat was the NRC’s second highest try scorer in 2015 and was pivotal in getting the Sydney Stars into the semis. His presence in an already potent backline, coupled with his excellent finishing skills, will give the Rays some serious go forward. Also keep an eye out for Norths stalwart Will Miller, whose influence at set piece proved a deciding factor against the Students at the Shute Shield Grand Final.

With four home games and three away, the draw the Rays have this season puts them in good stead to do well. Two back-to-back home games at North Sydney Oval against the Rams and Spirit sets the stage for a good start to the season, followed by their first away game against QLD Country in Round 3. The Rays have done well in never having dropped a game so far against either the Spirit or QLD Country in the first two seasons of the NRC, so if they continue that form, and start the season off with a first ever win over the Western Sydney Rams, that will go a long way to defining their season.

Starting the season with three in a row would put them in good stead for a mouth-watering fourth round home game clash against NSW Country at Rat Park. The Rays will also be hosting the Vikings there, and will be away against Brisbane City and Melbourne Rising. A hard finish to the regular season means making sure they start the season off well is even more important. 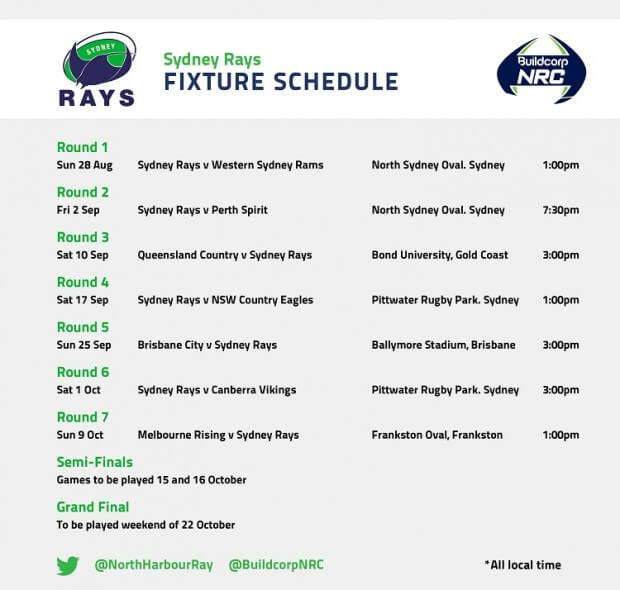 With four wins, two draws and ten losses overall, the Rays have always been competitive, but historically have fallen away against the sides with stronger Super Rugby talent. This makes the inclusion of more Super rugby talent in the squad all the more important. All of those wins have come against the Perth Spirit and QLD Country, with one draw against the Rams and Vikings. But, as seen by the closeness of several of the games, the Rays have the potential to take down teams with Super Rugby talent, as seen by their nail-biter against the Rising last year at Manly Oval.

As seen by the highlights just from that game, the Rays always played an attractive and fast style of running rugby. The biggest challenge the Rays have historically had is depth, with injuries proving costly. So often then have competed against teams like Brisbane City up until the 50-60 minute mark, then have fallen away. This makes results like their 55-29 loss against City at Ballymore last year not reflective of how close the game was. If the Rays do suffer again from a string of injuries, it could make for a very long season.

The Rays will be up against some quality outfits, but they (along with QLD Country), have the potential to be the dark horses of the competition this year.  Depth will be their biggest challenge, but if they have a good run with few injuries, they will be an extremely competitive side.

While it may be a bit of a stretch to predict a maiden semi-finals berth given the quality sides in NSW Country, Melbourne, Canberra and Brisbane City, I predict the Rays have the potential to finish just outside the top 4. If the Rays are able to shake the monkey off their back and win against the Rams, and continue their form against the Spirit and QLD Country, they will be in for their most successful season yet. Even if they don’t grab the wins, the writing is on the wall for them to be a really dangerous and competitive outfit, and one that could provide a nasty shock for their more fancied opponents.