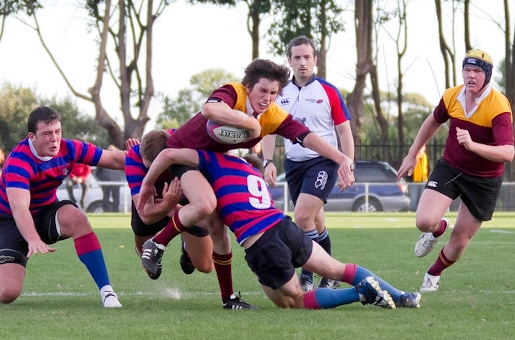 The Athletic Association of the Great Public Schools formed in 1892. Its members, by April 1892, included King’s, St Ignatius, St Joseph’s, All Saints Bathurst, Shore, Sydney Grammar, Newington, St Stanislaus, St Patrick’s Goulburn and the finest school in all of Lithgow, Cooerwull Academy. Scots joined in 1893, the Armidale School in 1897, and Sydney High in 1906.

Over time, the country schools dropped out (except for TAS) — Cooerwull shut down altogether because, legend has it, all of its staff enlisted to serve in the First World War. By the end of the First World War, however, Sydney had a bunch of relatively successful private schools unconnected with either the AAGPS or the Catholic system. These schools repeatedly applied for membership of the AAGPS, entirely without success. So in 1929 Knox, Barker, Trinity and St Aloysius formed the Associated Schools. Cranbrook was allowed in in 1930 and Waverley (after being rebuffed for some years) in 1944.

Sydney then had two private schools’ associations in which the major winter sport was rugby. Over time, schools began to apply to join the Associated Schools. There was a short period (1978-80) in which St Patrick’s Strathfield and St Pius were allowed to compete in the Associated Schools Rugby rounds on a trial basis, but they were denied full membership of the Association. And so history repeated itself, and the schools who were denied entry into the existing associations formed their own — the Independent Schools Association.That gave us three schools’ associations, which is more or less where we are today.

The point is, no one planned this. And the schools rugby competitions we play and watch today are conducted on the basis of decisions made in 1892 and 1929. Trouble is, nothing else has stood still in that time. Some schools in these Associations field players who are doing Pathways with the intention of grooming themselves for a career in professional rugby. They still find opponents who are grooming themselves for a career in law or medicine who enjoy playing a bit of rugby on the side.

One of these boys will spend three hours a day in the gym, and glance occasionally at a book. The other will reverse that ratio. One boy will smash the other out of sight in the HSC, but the favour will be returned on the rugby field. Hence, Sydney High has removed its 1st XV from the GPS competition and Grammar (0-197 in its last two games) must be heading in the same direction. Incidentally, many Grammar old boys become lawyers and doctors, and it must be only a matter of time before there’s a serious injury in one of these mismatches that keeps both professions busy.

The discrepancies are a little less pronounced in the Associated Schools competition, but the academically selective St Aloysius has never won the Plume Shield competition, and Cranbrook has won it only once since its resumption in 1989.

When rugby went professional at the senior level, there was an immediate impact on the junior level too. That increased intensity in preparation made it impossible for the casual rugby players to compete on anything approaching an even footing with the serious ones. I’m not criticising any school here, just observing that rugby has a different place in the priorities of different schools whom history has bundled together.

Add to this the obvious fact that there are schools outside the GPS competition and the Associated Schools competition that would compete strongly there. St Augustines and Oakhill are obvious examples. It seems mildly absurd that they are confined to school rugby’s ‘third tier’ while Grammar, due to an accident of history, leaks points at a rate of nearly two a minute.

Now, the modest proposal I’m about to suggest will not happen in my lifetime. Our private schools are too fond of their traditions. But suppose you were asked to design a schools rugby competition from scratch, given the state of the schools as they stand now, not based on how they looked in 1892. Surely you’d try to group the schools into pools in which they’d be evenly matched. You’d do this for three reasons: to create meaningful competitions, to allow the best teams to test themselves against each other on a consistent basis, and to allow the more casual players to enjoy competing against players on their own level.

And you might come up with something that resembles the conference system in American College Football. You might base those colleges partly on geography, but also on the standards of play and on the number of teams each school wants to field and the level of its aspiration. You could have a rung like the SEC, where (say) St Joseph’s and Barker and St Augustine’s could test themselves and a level like the Ivy League in which the academically selective schools could preserve their traditions of scholar-athletes without anyone getting hurt.

Schools whose focus changes from time to time could apply to move from one conference to another, and there would be an independent commission to decide who played where if no agreement could be reached. There would need to be a mechanism to ensure that outstanding individuals from less competitive conferences had an opportunity to advance to representative games, but that wouldn’t be impossible to achieve. And if membership of conferences changes from time to time, then it’s no bad thing, but proof that the system is doing its job.

As I say, don’t expect it to happen in my lifetime. But it should. I enjoy and respect tradition, but you need to adapt when the times change. And if you disagree with that, good luck enrolling your sons in Cooerwull Academy.