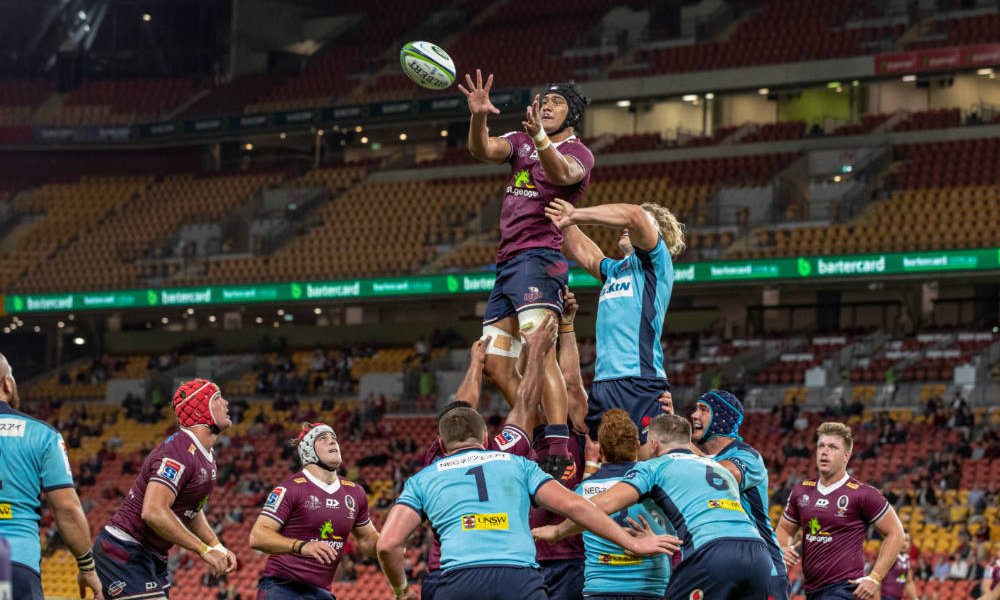 Last week I introduced the idea of ‘efficiency’, where we assign a value to a team’s ability to move up-field, keep possession and score points. Being able to measure efficiency allow us to zoom in on each specific attack or defence platform to see how team’s are performing.

So this week I want to zoom in on the lineout, because it is quite simply the most important platform in the modern game. Not only are lineouts the set-piece that occurs most – it is also used most often by team’s as a means to set up scoring platforms.

Note also that an efficient line-out is not only one where you secure your own throw. Having an efficient line-out means you are able to achieve a positive outcome from that attack platform such as gaining territory, keeping possession, scoring points or doing all of it at the same time! It’s no good you win your own line-out ball (accuracy) 10 out of 10 times, but your attack off that lineout has no potency.

By splitting lineouts into these two categories, we can better understand how team’s are able to convert real opportunity into points.

To zoom in further, we want to only see the lineout choice statistics of all team’s in Australia when playing in their opponent’s 50m area and their opponent’s 22m area. So picture this scenario:

Your team wins a pressure penalty in their own 22 and gets to kick the ball into their opponents 50m area as a means to get out of trouble and gain some great momentum to maybe set up a scoring platform closer to the line. 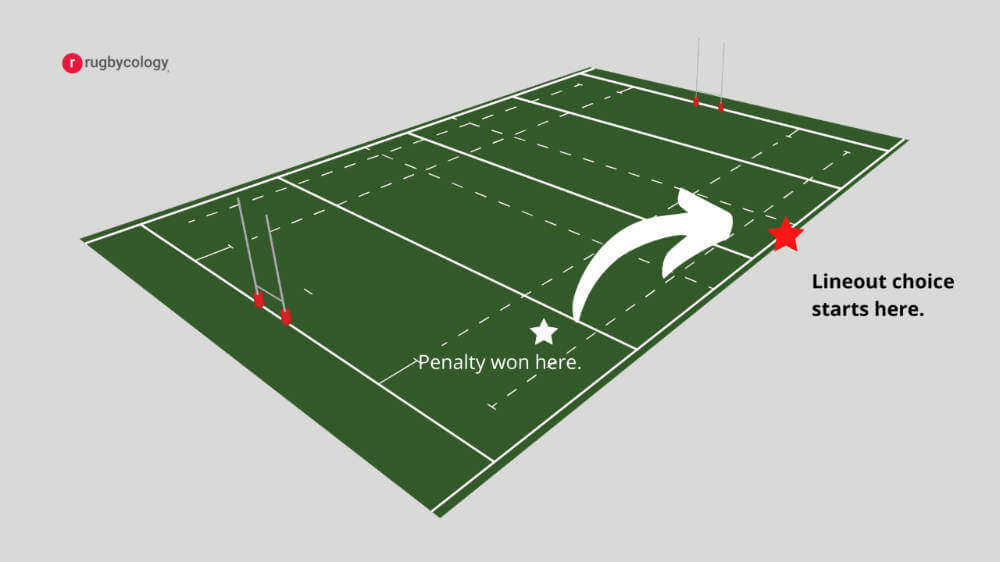 At the least, you want your team to secure their line-out ball and progress into their opponent 22. To achieve this your team will have an exit rate of 100%. If they are able to gain territory and keep the ball, or even score points, their efficiency rating will sit around 40% – so let’s see how your team performed (data taken from all games so far, so Force and Brumbies only 1 game played): 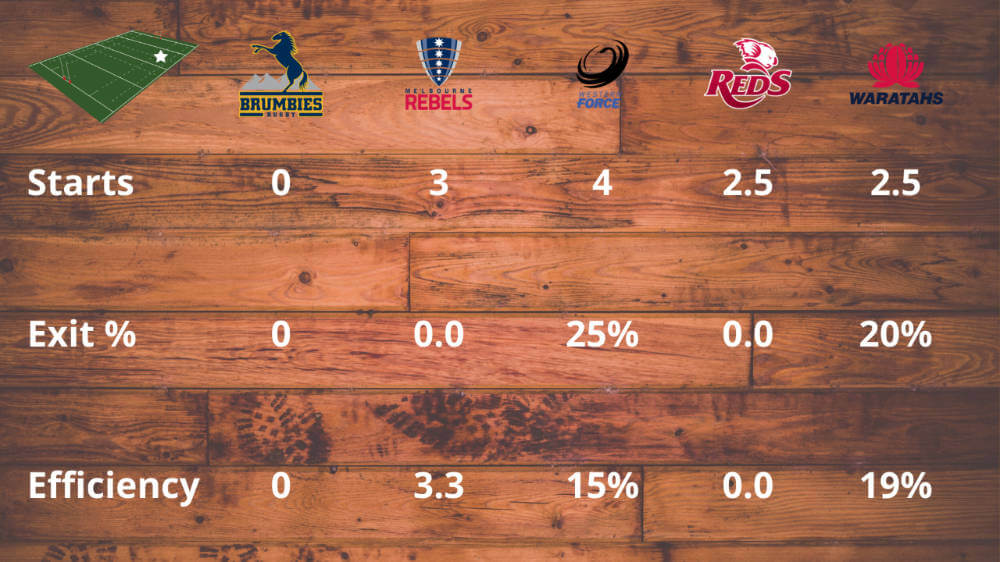 Imagine the frustration for Brad Thorn seeing his men launch from this platform 2.5 times per game, yet fluffing the opportunity each time with no territory gain and no efficiency rating at all. This means the Reds lose that throw-in, whereas the Tahs are at least able to get something out of this platform.

However if we study the same platform (lineout choice) in the opponent 22, things get interesting: 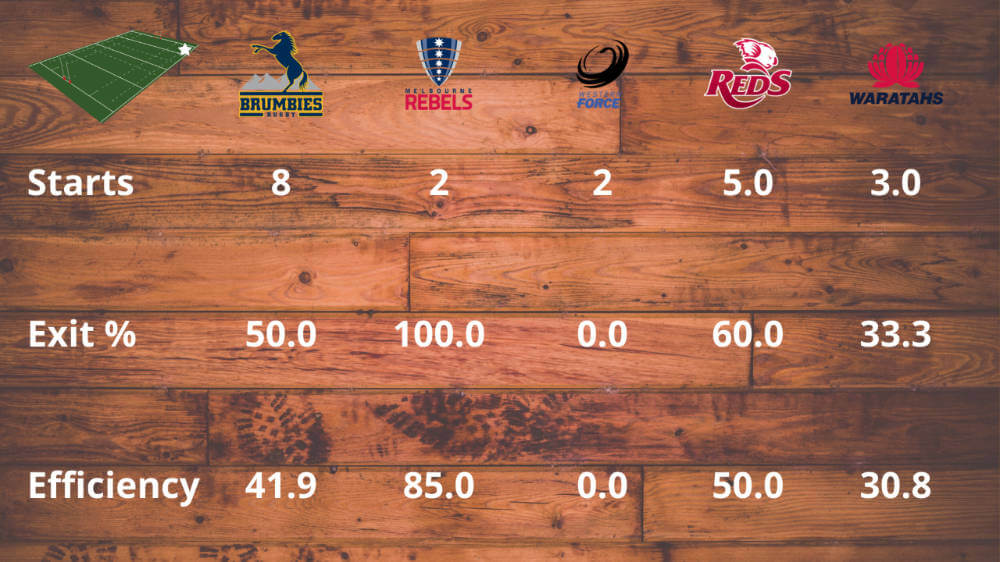 Suddenly the Reds find their groove and are far more efficient, whereas the Force suffer the white-line fever. The Brumbies are for me the real stand-out performer here, and are pretty ruthless to be honest. The legendary Lord acknowledged as much: 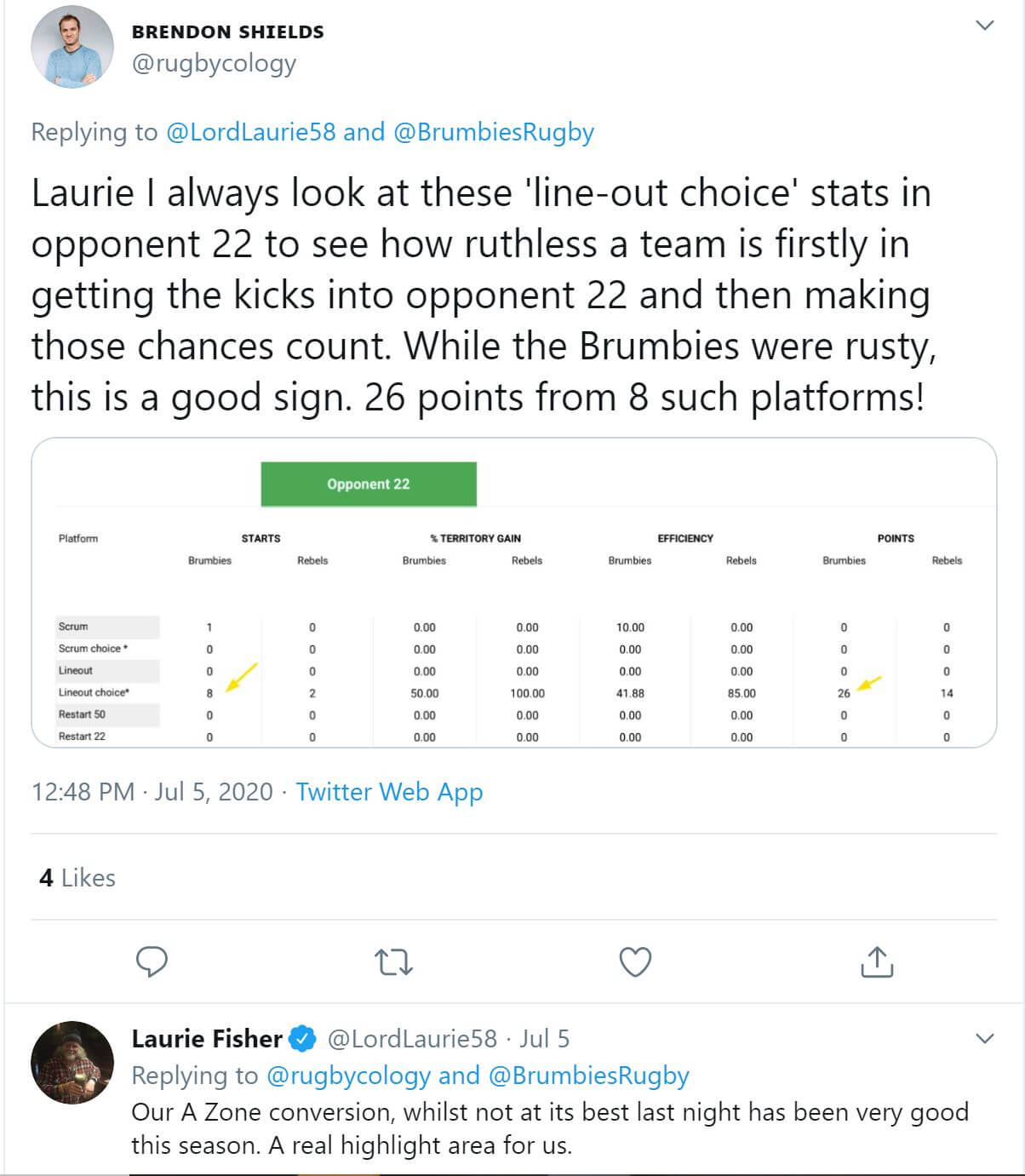 To kick for goal or not?

The Force only had two lineout choice platforms in the Tahs 22, and squandered both opportunities. That is 6 points lost due to not kicking for goal, and converting only one of those kicks would secure a bonus point for the men from Perth. Over the next few weeks we will be able to answer whether it is better for some teams to aim for a goal-kick than risk losing the lineout when launching from this platform. This weekend us, as fans of Australian rugby just want to see a tightening of our efficiency from these foundation set-pieces, and perhaps to see a few more passes stick.

Other than that it’s not all doom and gloom, but going into week 3 we need to see a reduced error count and an improved efficiency rating from all teams.