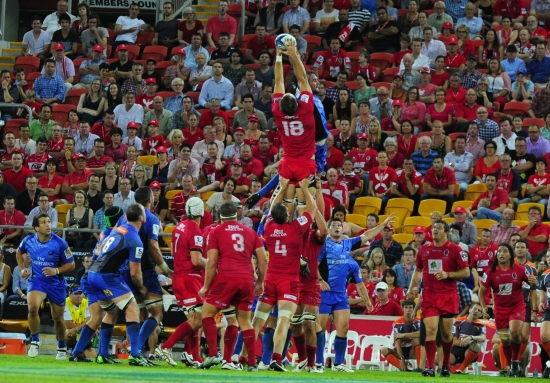 Brisbane turned on a scorcher for the Reds’ match against grudge team the Force. These games are interesting because though the Reds have won more, the Force have a better overall for and against. It seems if the Force get going, they get the job done. That said, the Force have never before managed a win here.

The match ebbed and flowed for the first quarter as the teams traded penalties and the ref worked on getting the breakdown to the standard required. There was a moment of excitement as Chris Alcock charged down a Quade Cooper clearing kick and led the chase as the ball held up in-goal. Winger Chris F’Sautia won the footrace through and knocked the ball dead. That seemed to spark something as we saw an apparent rise in the energy level.

This energy paid off for the Force when Alby Mathewson took on the line and managed to slip the tackle of Saia Faingaa and made good metres before the ball ended up in the hands of Alfie Mafi who was taken down just before the line by a flying Will Genia. However, momentum carried him and he finished it well. Sias Ebersohn added the extras and the score was 13-9 to the visitors.

Kyle Godwin shuts down one of the Reds scoring chances.

The Reds took until the last minute of the half to come out of their shells, but it happened when Liam Gill swooped on a loose ball and threw a Cooperesque pass to Ben Tapuai who hit it at pace. Some quick hands followed and the ball ended up in Chris F’Sautia’s hands heading for the line. It would have given the Reds the lead heading into the break if a fantastic cover tackle from Kyle Godwin hadn’t put an end to the play.

The other thing that happened on the half time buzzer was Patty Dellit deliberately knocking the ball dead. Normally this would have earned a penalty to the Reds from nearly in front. Had they got that kick it would have been lead change going into the sheds. He got away with it though, so they went for oranges with the Force leading 13-12.

Alby on his way to GAGR’s MOTM

The teams came back from half time and it seemed the Force had made the best of it. They seemed to be able to break the Reds’ line almost at will. The frustration started to show when a no-arms tackle from the Reds No. 6 Eddie Quirk on Force centre Kyle Godwin earned Eddie a yellow card. It would have been missed in the past but the TMO called it and Eddie got to spend 10 in the bin.

One of the breaks was sure to pay eventually and it almost looked like it had when Junior Rasolea managed to get on the end of a break and appeared to put the ball down. But it was deemed he had knocked it on.

The Force continued to work the line hard, and for 16 phases they were hard on attack. The Force were enjoying the benefit of being ahead on the scoreboard and had been buoyed by some great line breaks. The Force pack was rumbling hard on the line but the Reds’ defence held for 16 phases before the Force made a mistake and Chris Alcock knocked it on.

The Reds had their chances to take the game, but they just weren’t up to it. They looked quite disorganised in attack and their defence leaked almost like the proverbial sieve. The Force on the other hand made the most of every opportunity and fought hard. They completely deserved this win.

Kyle Godwin’s try-saver. A flash of enterprising play from the Reds as they threatened to break out. Chris F’Sautia in full Beast mode hammering down the line when Kyle Godwin makes a classic cover tackle and drives him over the sideline.

Alby Mathewson. Aussie Alby Mathewson (Pity we can’t claim him…) was on fire and gave the Reds a real hard time.

Hugh McMeniman relished his return to Suncorp and had a massive game. Given the uncertainty of the Wallaby locks at the moment, he did his chances no harm.