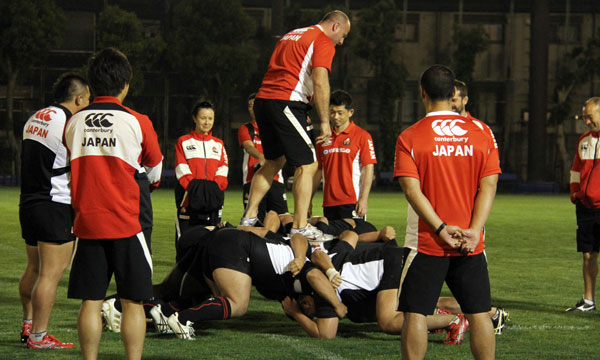 The Wallabies don’t play Japan very often, but it shouldn’t be hard to work out how they think the script should pan out. Top three against a minow sitting outside the top ten. The Wallabies will think they can overpower the Brave Blossoms, while they will hope to use their speed and guile to go around the Aussies.

The Wallabies were up 14 -3 after 20 minutes of the game thanks to two very well worked tries. The first to Samu Kerevi was simple numbers after the Wallabies had moved the ball from sideline to sideline a couple of times. The second was the favourite Wallabies set-piece move of the inside ball off the flyhalf to the blindside winger. Australia was working into their game plan very well. It wasn’t long before Tatafu Polota-Nau scored their third try running off the back of a well built driving maul. Australia’s forth first half try again came off the back of a lineout. This time they set up quick ball in centre field and beat the rush defence on the outside. Kuridrani had a clear forty metre run to the line. Kuridrani crosses for his second as the siren sounds for halftime.

Perhaps Australia’s best half of rugby this year. Tatafu Polota-Nau in the forwards and Marika Koroibete in the backs stood out if I had to pick players. I’ve seen enough of Reece Hodge at flyhalf now to want to see more of the same. One highlight for me was a penalty kick for touch from the forty metre line landing on the five-metre line.

Australia started the second half a little loosely and Japan took full advantage. They worked their way into the Wallabies 22 and pounded away at the line until Wimpie van der Walt crashed through the Wallabies to score. Australia hit back through another bit of sloppy play when Henry Speight cleaned up a loose pass and broke the rushing defence, Beale backed him up and Kerevi put himself in the right spot to take the final pass and fend off the last defender. Australia refocused and off a scrum close to the try line Kerevi took the crash ball and managed an around the back ball to put Kuridrani over for his hat-trick.

Australia was now in complete control of the match. Surprisingly Japan was still kicking for goal from penalties Nick Phipps fell on a loose ball to score then put Simmons through a gaping hole to stretch the lead out 63-16. Amanaki Mafi crashed over from a rolling maul to scrape back seven points but with ten minutes to go Australia had the game in the bag.

Australia was clearly the better side from the very start of the game. What was most impressive was the way they finished the game striving for the same patterns and energy that they started it.

How do you pick a man of the match in a nine try win. Hodge was okay and kicked 9/9. TPN was everywhere in the forwards. But if I had to pick one guy I can’t go past Tevita Kuridrani’s three tries and brilliant work in defence.

I’ve already mentioned Hodge and TPN but there were good performances all across the field. Kerevi, Speight and Koroibete in the backs. Sio, Kepu, Hooper and Coleman in the forwards.