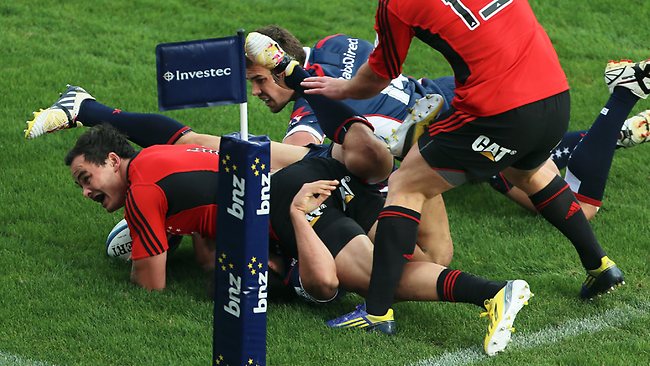 The Melbourne Rebels almost did it again.

You can read the above sentence one of two ways. A statement in support of a club who nearly followed up the unlikeliest of victories against the Crusaders at AAMI Park in 2012, with the unlikeliest of sequels today at AMI Stadium, leading until the last 15 minutes before penalising themselves out of the game and allowing the hosts to sneak home.

Or in a more sobering light, acknowledging that the same club has made almost winning an art form. The Rebels have acknowledged several times this year that close enough was no longer good enough, yet close enough is where they remain.

It’s an interesting situation the Rebels find themselves in. Capable of scoring, capable of leading, they just can’t close. Is it experience, squad, coach, or something else?

The Rebels secured the kick-off and looked bright from the start. They worked close to the Crusaders line, but were clumsy in possession, Matt Todd picking up and offloading to Sam Whitelock. From there, it took the Crusaders all of one phase to go wide and send Zac Guildford over the line. 5-0 after 5.

The Crusaders began to fire on all cylinders and the Rebels were forced to camp out in their 22 for what seemed like an eternity. Desperate defence from the visitors conceded a scrum on the 5 metre line. The Crusaders put a massive hit on, and with the Rebels preparing to defend on the right, they went left, Tyler Bleyendaal crossing for their second. Tom Taylor converted and it was 12-0 after 13.

The Rebels weren’t giving up, though, with brilliant tackling from Hugh Pyle and Mitch Inman trapping George Whitelock with the ball and awarding the Rebels their first penalty. They went for the lineout in their own 22 but a botched James O’Connor pass left the ball in the hands of Israel Dagg. After Dagg skied the kick out on the full, the Rebels attacked again and earned a penalty. O’Connor converted and the Rebels were on the board, 12-3 after 23.

It didn’t take long for the Rebels to cash in on that momentum, great ball movement through the backs sending Scott Higginbotham after 24 minutes. O’Connor missed the conversion, leaving the score 12-8.

The AMI Stadium crowd was hushed as the Rebels began to run the ball with confidence, causing the Crusaders issues to no end. The hosts gained some level of relief near the half when the Rebels were pinged for hands in the ruck, giving Taylor a relatively straight-forward kick at goal to extend the lead, 15-8 after 35.

Owen Franks ensured that relief would be temporary, committing a penalty at the scrum and allowing James O’Connor to point at the posts. With the kick, the score was 15-11 after 38.

The Crusaders made one final push for points as the siren went, and were rewarded when the referee blew up Nick Phipps for what looked like a legitimate play at the ball. Tom Taylor converted from straight in front and the half ended 18-11 to the Crusaders.

The Rebels continued their attack at the restart, claiming the kickoff and finding themselves in their attacking 22. They were playing some of the best phased ball they had in weeks, and gained a penalty when the Crusaders forwards strayed offside. O’Connor converted the penalty and clipped the Crusaders’ lead, 18-14 after 44.

The Crusaders started to hit back, and when Scott Higginbotham was trapped in a contest, won a penalty. Kicking downfield, they claimed the lineout, and won another penalty when the Rebels wouldn’t stay on their feet. Taylor made no mistake and the score was 21-14 after 47.

It was James O’Connor who proved the Rebels’ livewire, making a break for the line only to be stopped by a great Rhan Crotty hit. The effects wouldn’t last long though, as it was O’Connor who darted across the line for the Rebels’ second in the next play. The conversion was missed, but the Rebels were stalking at 21-19 after 52.

The Crusaders were stunned and the Rebels capitalised, putting massive pressure on the restart and earning the ball back. After some great phased play, the visitors sent Ged Robinson over in the corner to take the lead. O’Connor converted and the Rebels led 26-21 after 56.

It took a while for the Crusaders to gather themselves, but that they did, dominating possession within their attacking 22. Tom Taylor was about to go for a run and lost the ball, but got a second chance when the Rebels were pinged for obstruction. Taylor converted and made the score 26-24 after 62.

The crowd was lifting, and the pressure on the Rebels was telling, Jason Woodward putting too much on a penalty kick for touch, sending it dead. The resulting scrum wasn’t much better, Paul Alo-Emile not taking the weight and conceding the penalty. Taylor converted again and put the Crusaders back in front 27-26 after 67.

From there, it was all Crusaders. The Rebels lost the pace that had earned them the lead, and conceded a penalty for offside. Taylor went for touch, and as the Crusaders pushed for the line, Paul Alo-Emile conceded another penalty for going in off his feet. Taylor converted from straight in front, making the score 30-26, and despite a late run from the visitors, that’s where it ended.

Paul Alo-Emile had a shocker, struggling to keep the Rebel scrum up and handing the referee excuse after excuse to blow his whistle. When he conceded a penalty at a ruck in front of goal, allowing the Crusaders to extend their lead to 4 points, the Rebels’ hopes were dashed.

James O’Connor was the spark for the Rebels in the middle of the game, and was finally able to translate his agility into a try on the board. His performance at 10 should raise a few eyebrows as the Lions Tour squads start to be named.

Scott Higginbotham finally looks at home at the Rebels. This is the fourth game in a row where he has had a noticeable impact on the performance of the team, the forward pack in particular. His hand is firmly in the air for the 2014 captaincy.

Brutal Bulls Run Over Waratahs
Aussie Super Rugby Team of the Week: Round 11