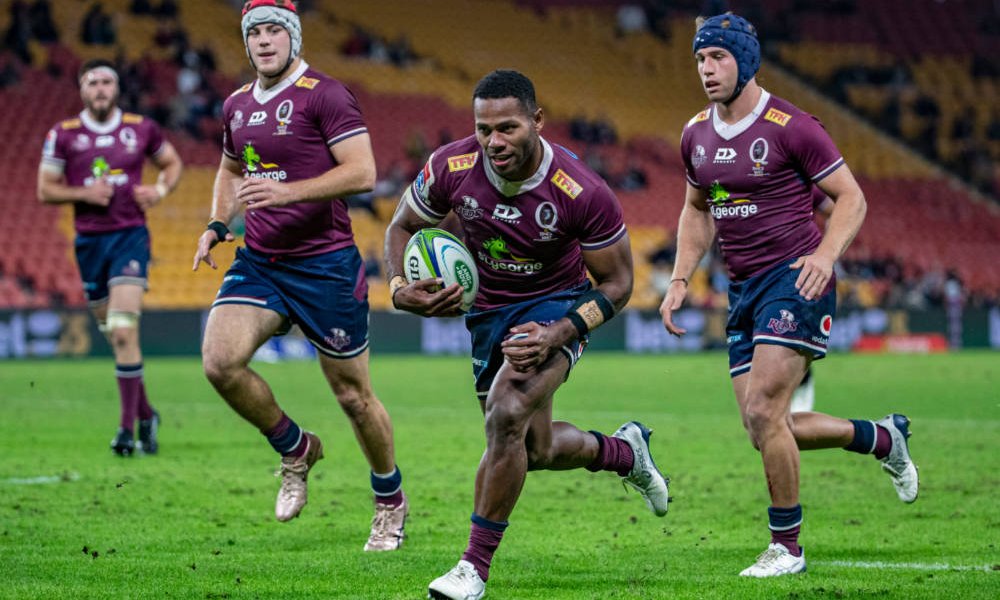 As the rain swept across Suncorp Stadium during, the PSTD of Super Rugby fans would have been clicking into overdrive.  The last time these two sides met was on another wet windy day, this time at Brookvale Oval in Sydney, for one of the more forgettable clashes of this season. The result was an underwhelming extra time draw and both teams withdrew into a ‘don’t lose mentality’ rather than seek the win.

A little over a month later and the competition has risen beyond that grim encounter and each team entered the game looking to consolidate or eradicate the previous week’s performance. The Rebels were bloody impressive in serving the Brumbies their first loss of the season.  On the flip side the Reds were a mess in being spanked by the Tahs, and were out to break a two-match losing streak.

It was all the Rebels early on as the Reds failed to clear from their own line on the back of some high-pressure Melbourne defence.  Some sharp attack was foiled when the visitors gave away and the penalty and the pressure valve was released.

The home fans breathed a sigh of relief when an early lineout actually worked..just.   Two more follow up successes would have given Brad Thorn a calming pause, particularly because of the late pull out of reserve hooker Alex Mafi, with Sean Farrell his replacement and a chance of Super Rugby debut.

The first attacking foray of the match came from Melbourne as another set piece backline play found Andrew Kellaway in space.    The Reds scrambled, but back to back penalties eventually led to first points through the boot of Matt Toomua. Rebels 3-0

The Reds secured the ball from the kick-off after a good chase by Filipo Daugunu.  Jordy Petaia and Fraser McReight both went close to the line, and repeated infringements by the defending team so the Reds opt for scrums rather than kicks or lineouts.

Some fairly one-dimensional attack wasn’t creating any challenge for the Rebels.  But a powerful scrum looked to.  With the Reds pack on the charge for what looked like a rare pushover try, Harry Wilson picked up and passed to Tate McDermott who looked for Petaia on the wing. Petaia wasn’t there but had cross back towards the open for his scrumhalf to eventually find. From there the returning Queensland winger found just enough space to find the tryline.  Reds 7-3.

Jordan Petaia scored on his return in a memorable @Reds_Rugby win at Suncorp Stadium. #REDvREB #SuperRugbyAU

On the back of Andrew Deegan’s fine kicking performance last week, both teams reverted to a conservative kick and observe strategy.  Neither side grabbed the authority here early, with James O’Connor and Jock Campbell match the Rebels boot work.

After yet another kicking exchange the Reds finally found their man in Marika Koroibete.  The Rebels winger caught the bug and put a bomb that was fairly nothing nor the other.  Campbell claimed it, just from Tate McDermott, and found space immediately.  When he got the ball to Daugunu it was put the glasses down.  But we had to pick them up again when he was curtailed by the cover defense.  Daugunu was still able to get the ball away a support Brandon Paenga-Amosa to dive across the line for the Reds’ second try.  Reds 14-3

On the half hour mark the Rebels had their chance to get across for their first try with repeated phases on the Reds line.  The home team’s defense was relentless, however when the turnover came it was Queensland who were soon on the attack.  When Campbell received the ball effectively in his own in-goal he, rather brazenly, grubbered across for his winger Petaia.  It came off and Petaia was off again. A little chip kick induced a late tackle by Kellaway and the penalty was theirs.

The half ended with a comedy of, not so much errors as questionable options. The high being Taniela Tupou sumoing Pone Fa’amausili into touch after the Rebels prop tried to outpace him on the wing.  The low being an injury to Hunter Paisami that would see him not return after the break.

If tighthead props running at each other doesn’t get the fans back, then I don’t know what will..#REDvREB pic.twitter.com/Hdz9pJvBky — Steve Lenthall (@steve_l15) August 15, 2020

The second half started with fantastic intensity as the Rebels were on the attack early through back to back Reds penalties.  But the Reds repeatedly repelled them. The Rebels through everything and everyone at them. Pone. Naisirani. Koroibete.  And they couldn’t get through.  Liam Wright, Fraser McReight, Tate McDermott. Lukhan Salakaia-Loto, O’Connor. Daugunu.  They all put in big defensive plays to turn the Rebels back.  Even young Josh Flook, on for Paisami, put in a big tackle on Campbell Magnay.

While the kicking duels continued, and caused some sighing amongst the fans, it was actually a fascinating aspect of the game.  Despite the presence of the Deegan, Hodge and Toomua (until he went off) the Reds probably finished on top more often than not.

While big Fa’amausili could not get around Tupou in the first half, he found himself in acres of space in the second when he ran onto a delightful short ball.  The run lifted the Rebels and from a penalty soon after, and they assumed their regular position of attacking the Reds line.  But they still couldn’t get through.  This time it was back to back McDermott tackles, both in the same play, that denied Frank Lomani and then Naisirani, that defied the visitors.

This will bring a tear to tighthead props around the world #REDvREB pic.twitter.com/OP4oWXgByY

With all the talk of State of Origin during the week, the Reds paid their tribute to their leaguie colleagues with some tackling that would have made Trevor Gillmeister wince.

With yet another penalty going the Rebels way, the Melbournians finally set up a secure driving maul.  The Queensland defence could not keep them out. But Naisirani could.  The big number 8 was basically over the tryline and dropped the pill to give the Reds yet another reprieve.

The dominance of possession by the Rebels was built on the back of of five penalties in a row. The last of which had hooker Paenga-Amosa yellow carded as referee Damon Murphy followed through with his earlier warning.  It meant that Sean Farrell would come on for his Super Rugby debut for the closing stages of this physical encounter.

His impact was immediate as he anchored a rock-solid scrum that set up an all too rare attacking opportunity for his team.  McDermott came blind to O’Connor who took the ball to the line and put Stewart through a slim gap.  From there, the inside centre did it all himself as he broke three Rebels tacklers to run 35m to secure the match winning try.  A well deserved one at that. Reds 19-3

The Rebels did the damdest to finish with a try but, again, the Reds wall kept them out.  The significance of which, on the back of the Stewart try, is that it gave the Reds an important bonus point which places them in 2nd place on the Super Rugby ladder.

The Reds now must back up next Friday night when the Force host them on the Gold Coast while the Rebels have a much needed weekend off.

There was no single game changer here.  No single action or play that changed the game. Perhaps it was the first try to Jordan Petaia, on the back of one of the toughest periods of his young life. But I’ll go for that relentless defensive effort about half an hour into the match that kept the Rebels at bay.

This could have gone to anyone in a Reds jersey.  Everyone played a key part.  I genuinely struggled to name someone who stood out so much.  Tupou, Stewart and Daugunu in particular did some special things in particular.  But I’ll go with Tate McDermott who made some plays in defense that belied his size.  His impact, back in the starting jersey, was clear for everyone to see.

Each of the players mentioned about as MOTM candidates will double up here.  Add the names Jock Campbell and Lukhan Salakaia-Loto and the astute play of James O’Connor and competition for Wallaby jerseys are tight and welcome.