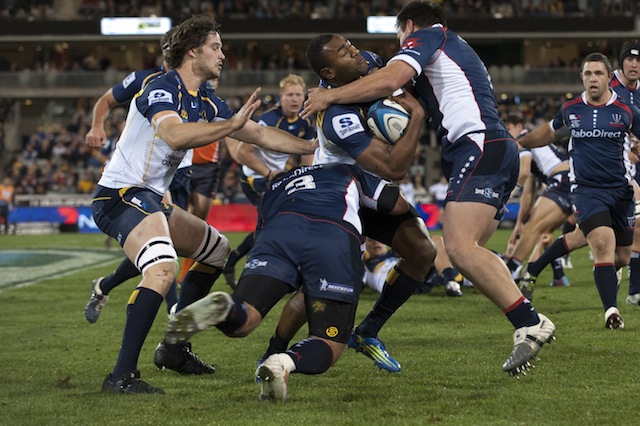 The Rebels host the Brumbies Leichardt Oval in Sydney on Friday night as we head into the second half of Super Rugby AU.

The Brumbies will be looking to consolidate their position at the top of the table and keep an unblemished record whilst the ‘home” team will be keen to avenge their opening round defeat after going down 31-23 in the opening round of Super Rugby AU.

The weather forecast promises a rainy evening in Western Sydney only adding to the intrigue of this fixture.

In the first encounter, the men from the Capital raced to an 18 point lead at one point, the Rebels grinding their way back to within a point before some aimless kicking gave away possession, a quality Brumbies team that needs no invitation pounced, scoring late to take the W.

The Brumbies are undefeated against Australian sides since March 2019, The Rebels will be desperate to end that run.

How do the two teams shape up this week?

Unbeaten in the competition so far, the Brumbies survived an almighty scare last week down the road in GIO stadium.

They looked to be cruising to an easy win with a comfortable lead at half time. The Reds roared back, at one point being six points up with five minutes left on the clock. A missed O’Connor kick to seal it, and a clutch penalty from Mack Hansen gave the Brumbies their second escape of the season, Houdini would have been proud.

The Flying Manbun, Andy Muirhead. Back in the starting XV.

The Brumbies make just one change a starting XV, Andy Muirhead coming onto the wing. The indomitable forward pack will no doubt be a deciding factor in the outcome of the match.

They also endured a scare themselves last week against a much improved Western Force side, sneaking it in their second Golden Point game of the season.

A wins a win however, the Rebels are building with a L D W W on their record card.

Dave Wessels has shuffled the deck this week in the hope of unlocking a talented backline, Andrew Deegan gets a start pushing Matt To’omua to 12 and Campbell Magney coming back into the side after injury.

The injury to Ryan Louwrens was worse than expected, a torn bicep against the Force means he’ll sit out the season, James Tuttle making his return earning his first game as a Rebel after a long injury layoff.

The Rebels starting 15 has a more balanced feel, with Deegan, an out and out fly-half starting, the Brumbies look strong as ever and will be ferocious in the tight.

Give the Ball to Isi.  He knows how to steal a win!

This promises to be a close one. Rebels by one score.