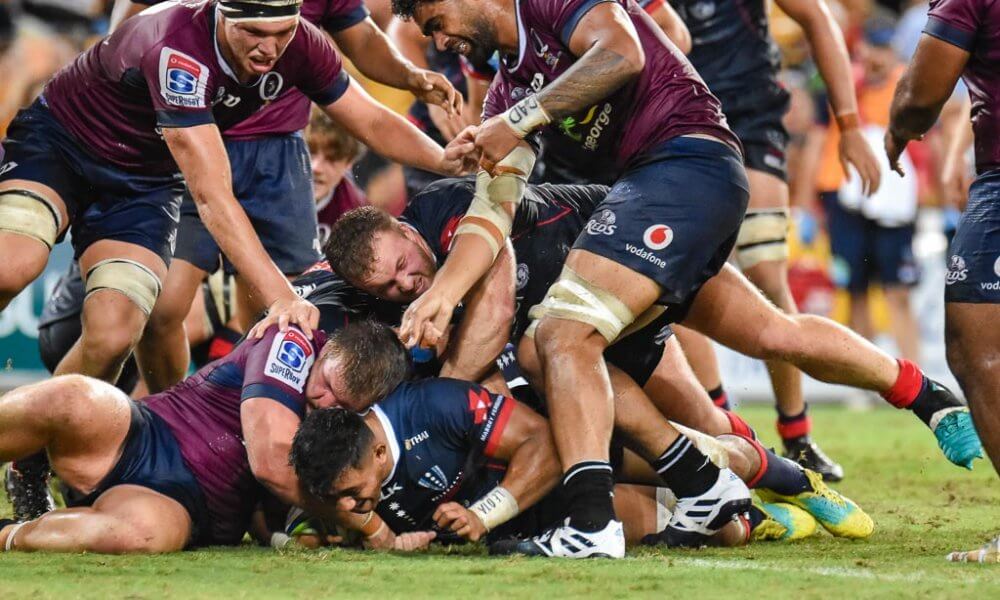 Super Rugby Australia got it first taste of Super Time as the Rebels and Reds battled it out at Brookvale Oval.

In wet conditions, the Rebels looked set to secure the all-important win in the reduced competition when Billy Meakes latched onto an intercept pass to put the Melbourne side up 18-8 in the 68th minute.

However, James O’Connor would keep his side in the contest, slotting the penalty goal before putting Chris Feauai-Sautia into a hole with seconds remaining, producing the perfect pop-up pass for Alex Mafi to cross under the posts to send the game into extra time.

Unfortunately, neither side could manage to break the deadlock, with the game ending in an 18-all draw.

After a brief back and forward period, it would be the Rebels who would get on the scoreline first at a wet Brookvale Oval, with Matt Toomua slotting the penalty goal in the 7th minute.

The slippery conditions from the earlier downfall played havoc with both sides as they traded handling errors throughout the first half.

The Rebels would continue to gain ascendency at scrum time, allowing them to dominate possession and territory.

However, they would fail to capitalise, with an ambitious 45-metre drop goal from Toomua sailing wide.

This allowed the Reds to go onto the attack, with some classic running rugby breaking the Rebels backline open, although they would fail to take advantage of their opportunities.

As both teams waste opportunities, the Rebels looked like they finally score a try in the 40th minute, however, Richard Hardwick failed to manoeuvre the sideline and was put into touch.

The referee would then call out Hamish Stewart, yellow carding him for a cynical foul as he was deemed to have held onto the tackle for too long, deliberating slowing the ball down.

Matt Toomua would slot the resulting penalty to put the Rebels ahead 6-0 going into the break. 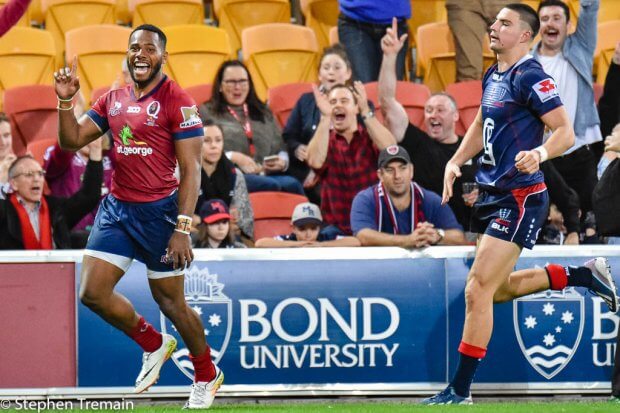 Filipo Daugunu scores in the corner

The second half was then throttled into action when Bryce Hegarty got whacked up Pone Fa’amausili.

Seeing Hegarty get sent into the shadow realm woke the Reds up, who would cross for the first try of the match when Filipo Daugunu stepped DHP to score in the corner. James O’Connor would miss the conversation to leave the Rebels narrowly ahead 6-5.

Both teams would then come together to exchange numbers/handbags after a late cleanout on Frasier McReight. James O’Connor would then step up to slot a 40-metre penalty goal to put the Reds back in front.

However, they wouldn’t lead for long, with the Rebels catching the Reds out as they spread the ball off the lineout, with local boy Reece Hodge finishing off the move.

O’Connor would have a chance to level the score, however, would miss the penalty shot from a similar position to his first penalty shot.

The Rebels would then turn the game on his head, with Billy Meakes latching onto an O’Connor short pass, running 50 metres to put the Rebels up 18-6.

With time running out, O’Connor would bring the Reds back into the contest as he nailed a penalty from in front.

O’Connor would then put Chris Feauai-Sautia into a hole with seconds remaining, who produced the perfect pop pass to allow Alex Mafi to tie the game up, sending the game into Super Time.

End of regular time: 18-all

As he headed into the unknown, both teams employed plenty of kicking as they seemingly played not to lose with not one field goal attempted by either side.

Towards the end of the first half of extra time, the Reds would earn a penalty on the halfway line after a dominant scrum.

This set up fullback Bryce Hegarty to win the game towards the end of the first half of extra time, however, his attempt would fade to the right of the posts.

With both sides kicking for territory, replacement outside back Reece Hodge would take advantage of the 50/22 rule, gifting the Rebels a prime opportunity, however, they would lose the resulting line-out.

Both teams would then look for possessions, with neither team able to break the deadline as the game went down a draw.

With the game all but buried, Feauai-Sautia’s vision to find Mafi kept the Reds alive and sent the game into Super Time, earning the Reds the two points.

It’s hard to pick one man from that lacklustre performance. James O’Connor probably was the best of a bad bunch, setting up both the Reds tries whilst slotting two penalty goals. Pone Fa’amausili and Billy Meakes were the best from the Rebels, with Fa’amusili bullying the Reds pack whilst Meakes remained a constant threat throughout the match.

JOC was my MOTM yet he wasn’t perfect, gifting Meakes his intercept try before he got the Reds back into the contest. Toomua seemingly couldn’t execute anything, struggling with his kicking game. Fa’amausili was impressive during his stint on the field and it won’t be mentioned with the rest of the young stars as one for the future.