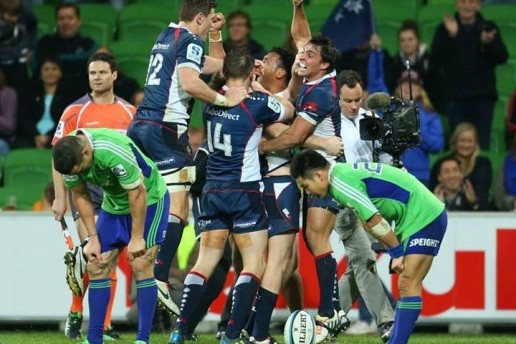 The Melbourne Rebels defeated a fast-finishing Highlanders 24-19 at AAMI park.

Melbourne’s weather turned on a ripper for the Rebels’ first home game of the season and the first day of autumn with a maximum temperature of 40 and a temperature of 32 at kick off. While the Highlanders were invoking the All Blacks RWC year resting policy, with a number of key players left out of the lineup.

It was a high octane start virtually from the kick off Quade Cooper threw a flat pass to an attacking Billy Meakes to put Meakes’ nose through the Highlanders’ line. Meakes was able to offload to Tom English who threw the ball wide to Marika Koroibete. The Rebels were able to move the ball from their own 22 to inside the Highlanders half. However, Koroibete had the ball stripped by the Highlanders winger Waisake Naholo.

Jack Maddocks tried a cross field kick to Meakes but kicked it out on the full. Then Naholo got the ball on the right wing and gave Cooper the don’t argue, which almost had enough force to send Cooper to Richmond train station. There was a wonderful cross field kick from Bryn Gatland (son of Warren) to Shannon Frizell, who scored his fourth try of season.

Elliot Dixon was able to interrupt a Rebels line out throw 30 metres from their defensive try line but the ball went to ground and ever reliable Angus Cottrell toed the ball through and regathered before finding Matt Philip the ball then went through Will Genia to Quade Cooper but Cooper tried a miracle ball which resulted in a knock on by Isi Naisarani.

The Rebels were attacking the line for five phases and had a penalty advantage but Naholo and Koroibete didn’t know and both ran the length of the field after Naholo intercepted a Cooper pass. Naholo won the race but there were no points on the end of it.

The Rebels elected to take a scrum instead of an easy three points and it paid dividends. Genia under pressure from the scrum base got the ball to skipper Dane Haylett-Petty, who showed great finger tip control. Haylett-Petty drew a player and passed to Tom English who strolled over for his 19th try for the Rebels, drawing him level with Reece Hodge as the leading try scorers in Rebels history. Quade Cooper converted from the sideline to put the Rebels in front 7-5.

From the lineout the Highlanders made twenty metres in five phases before Will Genia was penalised for not rolling away in the tackle. Another Highlanders lineout on the Rebels’ 22. A rolling maul from the lineout gained 15 metres. After five phases the ball came out wide to Josh McKay and it was a case of McKay versus Dane Haylett-Petty. Haylett-Petty tackled McKay around the ankles and McKay came within centimetres of grounding the ball. The Highlanders received a penalty for Will Genia being offside.

The Highlanders chose to go for an attacking lineout from 5 metres out. The Highlanders rolling maul was unstoppable and prop Siate Tokolahi was the recipient scoring his second Super Rugby try. Gatland converted this try to give the Highlanders a 12-7 lead.

The Highlanders dropped the kickoff forward into a teammate but AJ Jacobs missed it and penalised the Rebels a short time later for being offside.

From their own lineout inside the opposition half the Rebels spread the ball from one side to the other and after twelve phases, Marika Koroibete got a little bit impatient and tried to reach out and slam the ball down but unfortunately just lost the ball. Another penalty, for the Highlanders not releasing the ball gave the Rebels a lineout inside 10 metres. After eleven phases Cooper with magic hands put Jack Maddocks into a gap and over the line.

Naholo put in a chip kick in his own 22 straight to Koroibete, 30 metres out from the tryline. Koroibete linked up with Haylett-Petty, who made an incisive run and popped a ball to Angus Cottrell. Genia then found Cooper and Naisarani from the ruck before finding Meakes. Meakes threw a sublime inside ball to English for his 20th try to leapfrog Hodge as Rebels all time leading try scorer. English was rewarded for running a diagonal line.

The second half started with a bone jarring tackle from Naisarani on Teihorangi Walden. Haylett-Petty then received a box kick from Kayne Hammington on the chest just in side his own half. A searching cross field run from Haylett-Petty saw him beat a couple of tacklers and advance the ball 25 metres for the Rebels. Two phases later, Quade Cooper put through a dinky grubber kick from the 22. It looked for all money that Bryn Gatland had the ball covered. But Quade Cooper must have had the ball on a string because it bounced up perfectly for Billy Meakes, who gathered gleefully and scored the try, to make the score 24 – 12.

Isi Naisarani had an impact again causing a turnover at a ruck near his defensive 22. The ball was then passed to Marika Koroibete who made a dynamic run, gaining 30 metres. The Rebels received a penalty at the breakdown and Genia took a quick tap and grubber kicked, with the ball going into touch inside the attacking 22.

Play from both sides was a little bit sloppy in the first part of the second half. With the Rebels kicking the ball away more than they did in the first half.

Marty Banks came on with just over twenty minutes to go replacing Gatland and had an immediate impact. His long kick which went into the Rebels’ in-goal area resulted in Cooper grounding the ball. This helped the Highlanders gain a territorial advantage. Then Banks created havoc at the breakdown, which resulted in Haylett-Petty being penalised for playing the ball on the ground.

Richard Hardwick was penalised shortly after coming onto the ground for coming in from the side. Banks kicked the ball into the corner. The attacking lineout wasn’t as clean as the Highlanders would have liked but after some pick and gos Jackson Hemopo scored his first Super Rugby try.

Hardwick made amends a short time later earning a penalty for Ricky Jackson not releasing the ball. Reece Hodge attempted a 49 metre shot at goal and had the distance but not the accuracy.

Hardwick was the villain again being penalised for not releasing at the tackle and/or not rolling away. Banks drove the ball deep into the Rebels half but the Rebels’ defence was able to hang on.

With six minutes remaining the Rebels received a penalty near halfway for the Highlanders collapsing the scrum. From the lineout, Meakes passed to Cooper who tried to tap on to Maddocks, but the ball went to ground. Sio Tomkinson did brilliantly to pick the ball up and then he grubbered the ball to just inside the Rebels’ defensive try line. Marika Koroibete got back to save the day.

As the match wore on the Highlanders continued to gain the advantage in the battle for territory and some of the game management issues that the Rebels suffered last season reared their head.

The Highlanders attacked for eighteen phases as the Rebels chant went around AAMI Park. Before the Highlanders received a penalty and took a quick tap. It looked like Frizell was going to steal the match at the death but Michael Ruru, who had been on the field for less than five minutes was able to get his hand in the way and knock the ball loose of Frizell’s grip as he went over the line.

The Rebels held on to make it a 2-0 start to the season.

He wasn’t on the field for long but Michael Ruru’s effort in defence to dislodge the ball from Shannon Frizell’s grasp saved the game for the Rebels.

It is a difficult task to pick the player of the match. There was no real stand out and there were a number of players who were solid. Marty Banks made an important contribution for the Highlanders, but was only on the field for just over twenty minutes, I will learn towards Dane Haylett-Petty, who was solid at the back and involved in a number of the Rebels’ attacking forays.

Quade Cooper was Quade Cooper, some rocks and some diamonds, but if I was a selector he would definitely be in my Wallaby squad. Every time I watch Billy Meakes I am impressed. Marika Koroibete did some nice things in attack but also made some mistakes. Isi Naisarani is someone I can’t wait to see in Wallby colours and returning Rebels stalwart Luke Jones also had a good game.

Brumbies crash back to earth in Palmerston North
Reds Home Opener- Will the Optimism Continue?