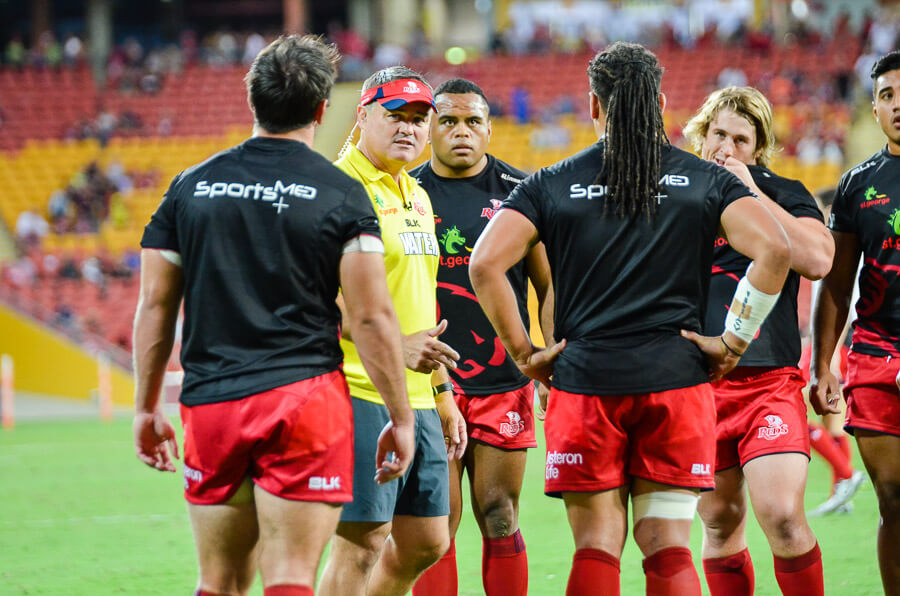 The Reds and Blues have featured in some epic encounters through Super Rugby history and fans will be hoping for another this Saturday night in Brisbane.

The match is vital to both teams ensuring they remain in touch within their respective conferences.  Whilst the Reds are batting 0 and 3 so far this season, the Blues are only marginally better off having won only their opening match against the Highlanders.

The Reds came close to their first win last week, fighting back from a 16 point deficit against the Rebels to finish within an un-attempted drop goal of victory.  It’s fair to suggest that the home town boys should relish a much less dramatic build up to their game this weekend.

For  the Blues new coach, and All Black legend, Tana Umaga is already under pressure. Despite the win against the Highlanders, Umaga has been criticized for falling into the Sir John Kirwan trap of making unnecessary team changes week to week.

This Round 4 clash represents the first ‘foreign’ outfit that either team has played this season. Whomever is able to adapt to the change in opposition playing style the best, may well come away with the chocolates.

Reiko Ioane v Eto Nabuli  – its a rare winger that can have a more physically imposing frame on him than young Reiko Ioane. But the teenage debutant, and sevens superstar, will face that this weekend with rugby to league to rugby convert, Eto Nabuli. Both players are relative novices in the professional game, as Ioane is only a relatively recent school leaver whilst Nabuli, almost a decade older than the kiwi, is still finding his feet in the game. Nabuli’s ears must be ringing from a week of Matt O’Connor yelling “don’t f*#cking kick – just f*#cking run!” after a couple of misguided chips v the Rebels. There’ll be no encouraging Ioane to do the same as he has proven one of the  most exciting attacking players in the shortened version of the game, and will be eager to show the same style at Super level.

Jerome Kaino v Hendrick Tui – Tui has been the revelation for the Reds as their go to man in attack. Tui gave Reds’ fans flashbacks of the golden Higginbotham age with a stunning run and try assist last week in Melbourne, steamrolling the usually reliable Mitch Inman in the process. Jerome Kaino, Blues skipper in 2016, loves a big shot and will undoubtedly have Tui in his sights this weekend. Perhaps lucky to be playing given an off-field citing from SANZAR for a dangerous tackle. A warning was all he received and his selection will serve as its own warning to the Reds – careful who you run at.

Stiles and O’Connor have kept the same team that suffered a narrow loss against the Rebels last week with the powerful Pettowa Paraka coming on to the bench for the injured Benny Daley.

Meanwhile Umaga has made a couple of changes by bringing in Ioane onto the wing for Rene Ranger and lock Patrick Tuipulotu coming back to lock to partner the centurion Josh Bekhuis.

I’m predicting the Reds (surprise) by 3. As mentioned above, I think they will have been well served by the quiet week they’ve had. The Co-Interim Head Coaches would have no doubt also appreciated the ability to ‘just focus on the footy’ and spend some time on the strategy needed for their first Super Rugby win of 2016.

This match also serves as the Queensland Reds Ladies Round and celebrates not only the role women play in rugby but also the strength of the program within Queensland.  The social media campaign around the initiative, under the “They Said” banner, is iconic, perhaps revolutionary, and plays on the theme that rugby is not just a man’s game. Full credit to the QRU for the promotion and to those involved in the development programs across the state as female participation has grown from 32,800 in 2011 to more than 125,000 last year. Queensland continues to produce some amazing talent for the national program, many who will feature prominently at the Rio Olympics later this year, and are the subject of this powerful campaign. The QAS Queensland Sevens squad will also play an inter-squad game at half time in the main game.

The Queensland Under-20s side will take on the Brumbies Colts in their final regular season match of the Super U20s Championship in the curtain raiser to the Reds – Blues clash. The game, featuring the likes of Taniela Tupou, Mack Mason, Lukhan Tui, Campbell Magnay and Maclean Jones, provides the Queenslanders with the opportunity to claim a clean sweep of the other Australian Under-20s teams, following wins over NSW, Western Force and the Melbourne Rebels U20s.