This is not how it was supposed to be. They are the Six Nations champions. Only two positions below us on the official World Rankings, well prepared and at practically full strength. We only had a few days together. Had been beaten by the Scots who at the time were a full 10 places below us in the rankings. We were missing a host of our first choice players and many of the players in the squad were out of form. The Welsh were too big, too hard, too awesome — but we won the first Test anyway.

So they went away and rejigged things. Yes, they had underestimated Genia. Yes, the defence wasn’t quite right. The lay-off was probably too long. The ruck is not reffed as they are used to and they needed clarification. And then we won the second Test. By a whisker, but a win is a win.

So where are the two teams now? What is their thinking coming into this last Test? What is motivating each team to go out there one more time and give it everything they’ve got?

Wales have had their egos severely dented. They wouldn’t have been expecting to be coming into this last match down 0–2. Gatland, Howley and co. will have spent the week in repair mode, building their team up for one more tilt at the southern hemisphere win they’ve been chasing for more than a generation.

And what about the Australians? We have a history of losing dead rubber Tests. We’ve been doing it for years and years… and years. How do you motivate a team who have already won a series against, lets face it, a fairly likeable foe? Many will say that they, as professional sportsmen, shouldn’t need motivating. I don’t subscribe to that notion. No matter how good any of us are at our chosen job we all need a little motivation sometimes.

So what will the Aussie coaches be whispering in our players’ ears this week? Will they be telling them about the rich history they are now a part of? Will they urge players to give just a little more to lock in that chance of glory? What ever they’re saying, I hope it works. The Welsh side will know as well as we do that we lose third Tests! Now is the time for our side to take a step forward and close out this Test series 3-0.

The Welsh have kept the same side as last match. Showing faith in the players from last week is not that big a call. They were pretty good on the pitch. Robbie Deans and company have decided to fiddle. Mike Harris and Cooper Vuna drop out of the 22 completely. Sitaleki Timani comes from outside the squad to take Rob Simmons’s loosehead lock spot. Timani is taller and heavier but it’s hard to see a good reason for the swap, except perhaps an opportunity to see what he’s got. Kurtley Beale also comes in from outside last week’s playing squad. Beale slots straight into fullback on his return from injury and this forces Adam Ashley-Cooper out onto the wing. Robbie Deans has picked a 5:2 split on the bench which, to me, means Kurtley must be 100 per cent fit and capable of playing a full game. 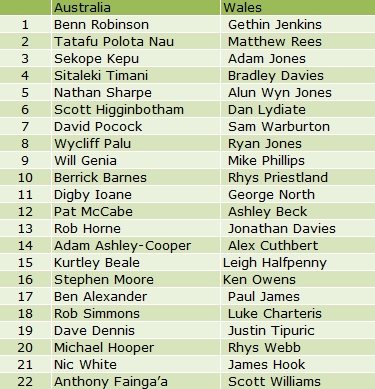 All the talk this week has been around Kurtley Beale. But there is one guy building throughout this Test series, quietly going about his work and gain match practice. Wycliff Palu is set to light the afterburners. Watch him as he create havoc on the fringes. The 120-kilogram wrecking ball is back!

Well, not really that fearless. Australia will win this one. Here’s why:

So there it is. Couldn’t be clearer. Could it?