Waverley were finally downed in the last weekend of the mixed NSW Schools trials  yesterday when Riverview had an unexpected win at Lane Cove.

There were also some interesting results at North Parramatta and Hunters Hill.

The Waves looked more likely to break the game open early and finally Donaldson hit a hole close to the View line and scored. He converted – Waves 7-0.

Then the game stalled for 15 or 20 minutes as both teams dropped ball and threw silly passes.

Finally, after a poor Waverley clearance from their goal-line, View winger, Cameron, gathered the ball at speed and weaved his way through several tacklers to score a brilliant individual try! Not converted – Waverley 7-5.

Riverview had an appetite now and they crept up the field after repeated Waves’ mistakes, for Dutallis score the first of his three tries, in the corner.

Neither try for the home team was converted.

After the “Double-V” had strung out “Iggies” with numerous sets after the break, they finally executed a marvellous try from eight sets of hands for Whiteman to score in the corner.

At no stage did it feel like the Waves were on top and about to blow the game open, because Riverview kept coming back repeatedly. Great stuff!

“Iggies” had a point to prove to the rest of the GPS competition, and they delivered! Shortly after the Waves’ try, View began it’s counter-attack.

A marvellous series of slick back line passing led to View winger Dutallis running onto a good pass down the sideline. Riverview retook the lead 15-12 when he beat the cover defence to score a classy try in the corner.

Five minutes later “Iggies” scored again, after a series of drives near the Waverley line.

The home team should have been more in front than 20-12, but they hadn’t converted any of their tries. The home crowd at Lane Cove held their breath.

As the game drew to a close the Waves scored in the corner after a long period of sustained pressure in the View half. No conversion: Riverview 20 -17.

With two minutes remaining, you could feel the anticipation of the crowd as the Waves received a penalty about 20 metres out and almost in front, to draw the game.

But unlike the Waratahs, Waverley decided to try to win, not draw, the match. You can’t beat schoolboy footy!

For the next few minutes the “Double V” hammered the View line but the defence was outstanding.

The final play of the game was a solid ensemble move of backs and forwards but the last pass, two metres out, with no Riverview defender near, did not go to hand.

The Wrap-up
The many Riverview supporters, old boys, and anyone who ever wore, or thought of wearing blue and white, erupted, as the final whistle blew.

It was a memorable victory for Riverview which was given no hope, and it it reflects the spirit of both the team and the school.

Best of luck to all teams as their association competitions approach. 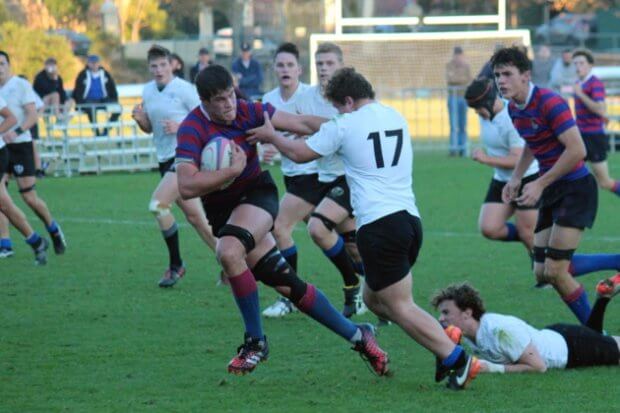 It was apparent early that Knox fancied their fortunes in the forwards. Multiple phase pick and drive by the Knox pack was rewarded when #2 Ben Adams burrowed over to open the score. #10 Tom Woodcock added the extras. Knox 7–0.

Handling errors from both teams stymied momentum—Knox kept turning the ball over and Joeys pushed the last pass too much. 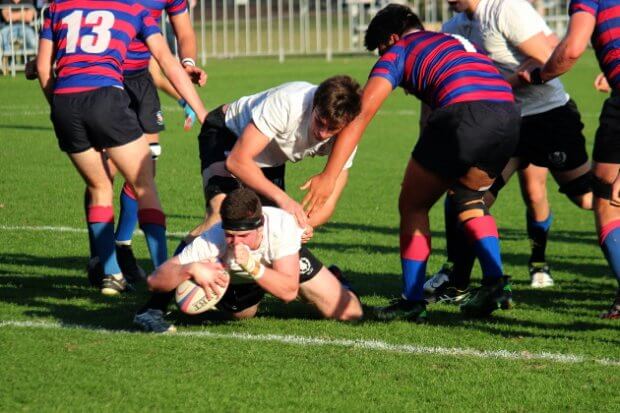 After 20 minutes, Joeys managed to string a succession of passes together. A cut pass to #12 Nick Chan in a gap got him over near the posts. Knox 7-5.

Joeys were moving the ball wide quickly and were breaching the Knox defence with their mobile forwards. #3 Lincoln Blackall, a beneficiary of a passage of strong forward support play, scoring near the posts. #6 Jack Quinn converting. Joeys 12–7.

On half time, Knox capitalised on a line break from #10 Tom Woodcock who deftly moved the ball to Knox speedster #11 Tom Cameron who scored in the corner. 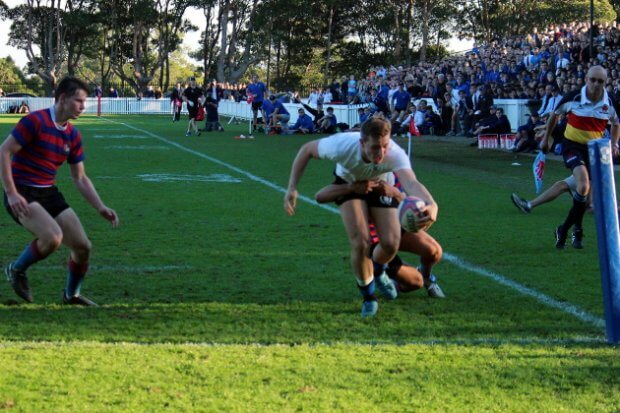 Tom Cameron scores in the corner for Knox

Knox were struggling to clear the ball out wide, their halves were under a lot of pressure with the Joeys’ forwards gaining ascendancy in the tight stuff.

Eight minutes into the half, Joeys #5 John Yates crashed over to score after a succession of strong pick and drives from the Joeys’ forwards. Quinn added the extras in front Joeys 19–14.

Credit to the Knox forwards, they didn’t take a backward step and returned serve on the 14-minute mark with their own pick and drive try out wide to LHP Dawson. The game was locked up at 19-all.

A line break from Knox #4 Tom Humphrey near half way had Knox on the attack. An uncustomary missed tackle by Joeys out wide had #15 Michael Pavlakis free and over the line to score. Knox retook the lead 24–19. 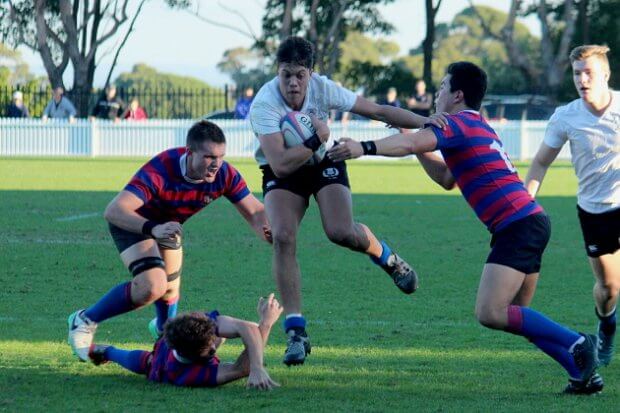 The turning point of the match came 20 minutes into the half. Knox was attacking deep in Joeys’ territory with #14 Tom Leigh in space and passing options inside.

Replacement Full back Joseph Kandalaft drove Leigh over the sideline with an outstanding one-on-one tackle. The crowd roared and Joeys lifted.

Strong forward running from Joeys was well-finished when #5 Yates muscled through scrambling defence for his second try. Quinn converted Joeys 26–24.

With growing confidence and an evident fitness advantage, Joeys gained the ascendancy. A clever grubber kick from #10 Vincent Creagh in Knox’s half was scooped up by #12 Nick Chan near touch. Joeys 31–24.

In the final ten minutes it was all Joeys. #15 Lachlan Shortis and #14 Xavier Ryan relished the space and showed their pace.

Ryan and #7 Ben Houston both scored late tries which were converted by Quinn. 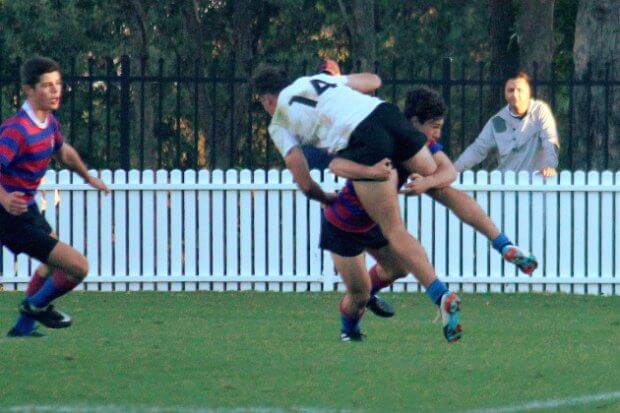 Video compliments of “Sidesteppa” – Thank you.

Two closely-matched teams slugged it out in an arm-wrestle at North Parramatta, where the momentum swung sharply on several occasions.

Kings got off to a flyer, with Charlie Brown (7) scoring twice. The first followed a raid off a line-out near the Scots 22, where the Scots D was found wanting. With the second, a loose Scots pass was toed ahead by fly-half Matt Minogue (10), who regathered before chipping ahead for Brown, who won the race to the ball.

Both tries were converted by Minogue, who also slotted a long-range penalty goal to take the score to 17 – 0 after as many minutes.

Scots then gradually clawed their way back into the match with three tries in a row. In between two tries scored from close range by Jeremy Williams (4), Charlie Barker (12) scored a runaway try from an intercept.

But just when it looked like Scots were going to kick on from there, Kings had the final say in the dying moments of the first half. Johnny Connolly (15) scored out wide and Minogue nailed a difficult conversion.

Scots scored first after the break when Thomas Yassmin (14) made a strong run down the right flank and kicked ahead for Ben Baker (15), who toed ahead and regathered to touch down near the uprights. With the conversion successful, Scots lead 28 – 24.

The momentum then swung again, when Hugo MacKenzie-Wood (4) scored for Kings and Minogue converted to reclaim the lead 31 – 28.

For the remainder of the match, Kings dominated possession and field position and, although they created some good scoring opportunities, they were unable to extend their lead.

The full-time score was an accurate reflection of the game. It was very evenly matched, but Kings thoroughly deserved the win.

Scots displayed lots of character to fight back from a significant early deficit. They also played really well, in patches, with ball in hand. But they would be disappointed with their execution and discipline at times.

Kings defence was outstanding and they put a lot of pressure on Scots. They also made fewer mistakes.

From the get go, Cranbrook put on a rugby exhibition. Despite being smaller in stature, their commitment to the ruck was impressive. Cranbrook Prop Smoufa-Ho was dominant early while 5 Will Andreas and 7 Harvey Tilley were ensuring multi-phase possession.

Tas Smith 9 who must be the smallest 1st XV player in Australia was directing his backs brilliantly with his slick pass providing front-foot ball for his backs.

For the first ten minutes Cranbrook dominated, and after a penalty gained them good field position, the forwards with their tails up, won the lineout and 2 Lim-Strachan crashed over.

At 5-nil, Cranbrook had thrown down the gauntlet to a Barker side that had yet to get out of first gear. Barker regathered and went back to basics. They kept ball in hand and using their bigger forwards they started to rumble.

After several phases and some big runs by 5 Flaherty and 2 Thomas, Barker were deep in Cranbrook’s half. A strong Barker scrum and a nice inside ball from 9 Tejcek to 11 Lloyd saw Barker cross for the first of many tries.

The restart, was more of the same with the Barker forwards lead by 8 Reimer and 1 Chalmers, strong with ball in hand and making easy metres up the middle. Tries followed, with 4 Dring, 8 Reimer and 6 Pollard all crossing the chalk.

The Barker backs were also having a fun time with 15 Kitchener being elusive as big centre Will Harding ensured that his name will be in the mix when CAS squads are announced.

Reimer and Lloyd added another try each for the first half.

It was more of the same after the break.

The smaller Cranbrook team although gallant and having a good ration of possession , could not crack the defensive Red wall.

Barker has learnt to value possession in these trials, and when they got their mitts on the ball, points follow.

Two more tries to 8 Luke Reimer, (in a Greg Cornelson like effort) and another to Lloyd and finally one to replacement forward from the 16As Dane Wilson resulted finished the try-scoring.

Cranbrook are a fine rugby school and with their 16As going down by a point to a strong Barker side, they do have a bright future. But like Barker has faced over the last two years, the Brook has some rebuilding to do and 2017 looks like it will be a tough year.

For Barker, this game was a confidence builder. There is no doubt the “Double Vee” and Knox deserve favouritism for the Plume Shield, but on their day, this Barker team can spring an upset.

Best for Barker: All the young men who proudly pulled on the red jumper.

There were other school trials on the weekend apart from the above.

They played 3 x 35 minute periods; the first being CHS II v CCC; the second, CHS I v CCC, and the third CHS I v CHS II