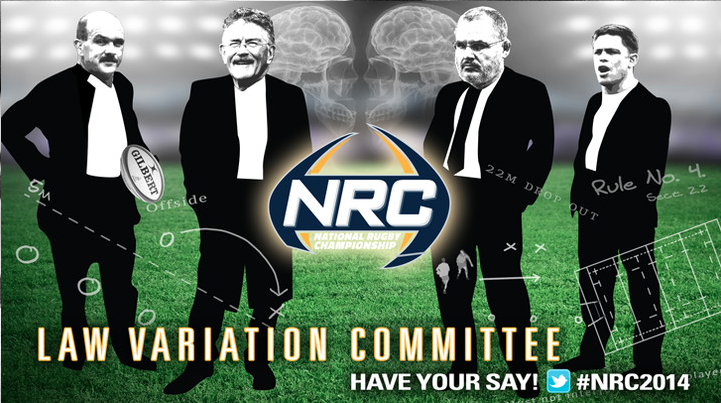 After over 600 suggestions and then over 6000 votes, the NRC law variation committee has narrowed it down to 12 possible law variations.

A list of 12 proposed laws variations for this year’s National Rugby Championship will be discussed with the 9 NRC clubs over the coming weeks.  The final law variations will be confirmed soon afterwards.

Comment below what laws you would like to see included in this year’s competition.  I like the idea of having a time limit on scrums as I find that a lot of time is wasted setting and re-setting scrums which people are not really interested in.

1. Instead of 4 try bonus point, winning team is awarded a bonus point for finishing 3 or more tries ahead of their opponents

3. After a successful or unsuccessful penalty goal attempt, play is restarted with a scrum to the non-kicking team at the place of the penalty

4. Time limit for both teams to form a scrum

5. No option to kick for goal from a scrum penalty (kick to touch allowed). If penalty becomes a ‘repeated infringement’ then kick at goal is allowed.

6. Scrum-half of non-feeding team is compulsory, must stay within 1m of the scrum, and cannot move past the mid-line of the scrum

7. If a yellow card is given for repeated team infringement (excluding dangerous play), the non-offending captain chooses the opposition player who is temporarily suspended for 10 mins

8. Players arriving through the gate may ‘drive out’ opponents past the ruck, creating more space behind the ruck for attack

9. If non-throwing team does not contest for the ball, the straightness of the throw is not considered

10. A ‘mark’ can be awarded any place on the field

11. After half-time and full-time, if awarded a Penalty Kick, you can kick to touch and play the lineout

12. Free Kick for kick-off infringements as per Sevens

NRC Fixtures Announced
Adopt a team? Bah humbug! (Why I am over Super Rugby for 2014)