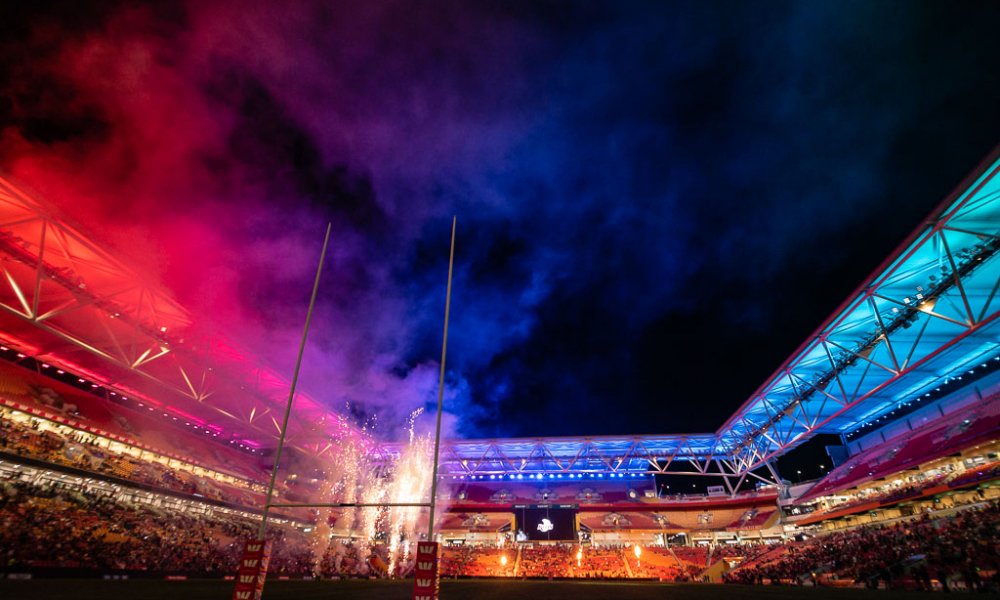 Welcome Comrades, it’s May Day in the People’s Republic of Queensland. I have volunteered to fill the massive shoes of Charlie who has made an excellent contribution to the G&GR family. Unfortunately, his real job has intervened and he’s unable to contribute for a while. I for one have welcomed his referee’s perspective and insight into how the game is officiated and his views on the wider game.

There will be a royal commission over the ditch after this week. Australian teams winning two and being highly competitive in the other two. All this and Fiji running the Highlanders close.

Mini Game A Good Game worthy of a watch,

Recap worth the ten minutes as it is still rugby.

This game was a very close and while many of my G&GR colleagues and Justin Marshal bemoaned the Reds kicking the ball away a lot I believe this is just a misunderstanding of the game. Here are the facts: the Reds kicked the ball 32 times and the Chiefs kicked the ball 28 times. Stats from SANZAAR Here.

I think this is redundant thinking of the Cheika era where were supposed to run it from everywhere and then bemoan the fact that the Kiwi teams live off our mistakes and score from turnover. If a Kiwi team kicks the ball a lot they are being tactically astute, if we do it it’s not being brave. Our jail rugby friends think playing like this is boring. they also think having a group hug for a scrum is OK.

The both teams played well as befits a close game. My only complaint as a Reds fan was that the referee had a clear picture in his mind about the scrums and the Chiefs were wheeling it all over the place and getting away with it. Fair play for doing so but it didn’t stop me from wanting to through things at the TV.

Another gutsy loss for the long suffering fans of the Force. The Blues kicked out to an early lead and the Force came back at them hard and could have stolen the game at the death. I must confess to liking the Force and how they go about their business, I see a bright future for them and they aren’t that far away.

This was without doubt the game of the weekend. They atmosphere was electric and seeing how the place was raging it would be my vote for the Super Round. Could you imagine a week away in Fiji and a weekend of rugby at either the start or the end of it.

The Fijians were the best version of themselves sublime in attack and resolute in defence. Any team turns over the ball at any point in the field is on high alert. Once the Fijians get more continuity going forward they will be a team to beat.

They Highlanders won this game through set piece and playing point to point. No team will want to take them on in a running game.

The Waratahs came into this game as the world’s biggest underdogs. Even Hoss didn’t pick them (he did state in the chat that he didn’t pick against them). The Tahs came out of the blocks well and raced to a 17 nil halftime lead. The Saders frankly started to wilt under a bit of pressure and eventually it told with some ill discipline eventually leading to the Tahs getting a well deserved win.

As a Reds Fan I felt a bit dirty wanting the Tahs to win but I will say this, I support all of the Australian teams over the Kiwis every day.

My favourite part of the game was the interview with Tane Edmed playing on the same ground as his father did back in the day and frankly standing up well. He started the season as the third string Tahs 10 and it could be argued he is the first choice now. Calm and assured, give him another year and see what happens.

Melbourne got the win, they’re getting better but in my view they dragged the Pasifika team down to their level and beat them with experience.

Stupidity of the week goes to Ray Nu’u who head-hunted Christian Leali’ifano trying to solve a defensive problem himself, he has just come back from a suspension and I expect this will end his season.

The Brumbies brought an excellent game plan today. Physicality and execution and TBH the Canes couldn’t live with them. They were comfortable IMO and just asked the Canes more questions than they could answer. In the end the Brumbies won going away and if Ardie Savea wasn’t playing it would have been a much larger margin.

England have claimed their fourth successive Women’s 6 Nations title with a hard-fought 24-12 victory over France in the grand slam decider in front of a sell-out partisan crowd at the Stade Jean Dauger in Bayonne.

The visitors arrived in the Basque Country having won their four previous matches by margins of 50 points or more and capped an impressive campaign on Saturday with their 23rd win in a row and their 10th straight victory over France.

England initially found themselves in unchartered territory as France got an early score but the hosts’ bright start soon turned into a long afternoon as the Red Roses hit back in brilliant fashion with three of their own.

Les Blues were held at bay by the physicality and defensive work of Simon Middleton’s side, who were relentless for much of the half and carried their 14-point lead into the break.

The English would have to be favourites for the RWC in NZ.

Interesting News from the Gold Coast today. I can only assume they were still celebrating after last weekend. The Rooster Chicken Fijiana 15s side went down to Japan 28-14 in the Tri-Series Competition at the Bond University Oval in Australia.

Fijiana started the match strongly camping close to Japans try-line for the first 10 minutes. Younis Bese finally got a break 45 metres out and showed blistering speed before scoring the opening try. The second try came from centre Roela Radiniyavuni after a line break who beat three defenders to score.

Discipline became an issue for the rest of the game as Japan scored two tries to level the scores 14-all at the break. Fijiana continued to give away multiple penalties in the second half which led to a yellow card and Japan being awarded a penalty try. Japan continued to use their set-piece effectively and scored a team try from a rolling-maul minutes before the final whistle.

Fijiana will now face the Wallaroos at Suncorp Stadium in Brisbane at 7pm next Friday.

Couple of things that caught my eye.

Danny Care picked up a late yellow card for dissent. It was Care’s sixth yellow card of the season, which is a record for the Gallagher Premiership. My favorite comment was from the ref who said to him, “come here, it’s going to be a yellow but it can be a red”.

Bath Rugby is in the Doldrums

Bath lose to Gloucester 64 to nil in a West Country Derby.

Who takes 60 in a derby game? Bath, that’s who. They have probably one of the best lists in the comp on paper, it’s a shame the game is played on a field. Professional teams don’t give up 60 twice in a season but Bath lost to Sarries earlier in the year by 70 at home.

Can you imagine the worries east of the Sydney Harbour in Shute Shield?

In what has to be one of the biggest upsets of the season the Two Blues have beaten Sydney Uni at uni for the first time in 25 years. This week after beating the defending premiers their instagram was blowing up.