Momentous Moments: Why the Wallabies lost at Twickenham 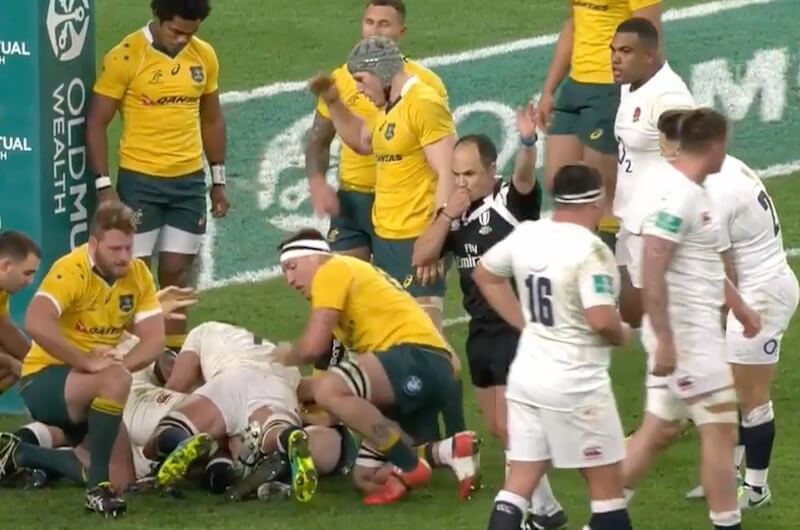 Momentous Moments: Why the Wallabies lost at Twickenham

The Wallabies have found all manner of ways to lose this year. They’ve descended into rampant indiscipline and tactical ineptitude (England in June). They’ve butchered a boatload of tries (Ireland). They’ve defended like a turnstile (NZ in Sydney). And they’ve let bad teams drag them down to their level (South Africa in Pretoria).

But Saturday was an exemplar of a different way of losing: playing well for stretches, indeed very well for the first 15 minutes or so, but losing a slew of the key moments in the match.

Lady luck has been allergic to the Wallabies this year and she was no different in the opening stanza against England, when Australia could have had four tries on the board. Game over. In the fifth minute, Dane Haylett-Petty pops through an unorthodox and nicely weighted grubber, Owen Farrell goes to play it under pressure from David Pocock. He makes a total mess of it and then Mike Brown, for reasons best known only to him, tries to sky-kick the ball away. Tevita Kuridrani dots it down, but the TMO rules that Pocock knocked it on. Unlucky.

Two moments in one. Sekope Kepu and Tevita Kuridrani both try their luck from close range, and both are held up. England are on the rack, and on a different day would be down by 25. Yet somehow the score is just 10-0.

Australia are still looking ok, both on the field and on the scoreboard, when they have a midfield ruck. Mako Vunipola has rolled out of it towards Nick Phipps, distracting him. If Phipps runs into Vunipola, or trips over him, or even just makes a bit of contact with him, the referee likely awards a penalty. Australia walk thirty metres upfield, and they’re back in England’s half. Instead, a series of calamitous decisions end up with Jonathan Joseph hacking the ball towards the Aussie line.

There are three Aussies chasing and just Joseph from England, but he gets a beautiful bounce, the kind you couldn’t manufacture, and evades the ankle tap to score. A combination of lacking savvy (Phipps’s naivety) and more luck going England’s way.

Tom Wood tackles David Pocock around the neck and uses it as a lever to throw him to the floor. If the referee goes to the TMO, it’s almost certainly a yellow card. He doesn’t, it’s a just penalty. A minor thing, but again, the luck just not with the Wallabies.

The Wallabies are up 16-13 and looking good as they maul the ball from a midfield lineout. Tom Wood comes around the inside of the maul, right in front of the referee, and wraps around to end up on top of the ball carrier. Nine times out of ten, that’s a penalty for the Wallabies, but Jaco Peyper sees it differently. From the change in possession, England score.

Jonathan Joseph puts through a peach of a grubber for Marland Yarde. It’s very hard to execute off the cuff, and at pace. We shouldn’t downplay that at all. But Yarde muffs the grounding, with the ball hitting his left hand and going forward. Just the sort of gift we needed in a tight game like this. The TMO, continuing an awful year for TMOs everywhere, rules that the ball is in continuous contact with his left hand, which it clearly isn’t, and therefore not a knock on.

England number 8 Nathan Hughes picks and goes from the back of the scrum down a short blind. Australia’s defence force him sideways and then end up with a dominant tackle. Dane Haylett-Petty comes through the ruck first without an Englishman to push against, but falls to the side, out of the ruck. There’s no Englishman there yet, so nobody is impeded.

David Pocock and Michael Hooper clean out Marland Yarde and Chris Robshaw. Lopeti Timani, who had a really good game, comes straight through the heart of the ruck and gets a big boot to the ball. Jaco Peyper rules that the Wallabies have gone off their feet, but it’s a 50-50 call and it would’ve been no surprise to see the play allowed to continue.

Despite England controlling the game in the second half, Australia find a way back into it. It’s an Israel Folau special, as he busts five tackles to fracture the English defensive pattern. The Wallabies send it wide and it’s three on three, but there’s a “mismatch”: Sekope Kepu in a little space up against any other prop in the world. He unfurls that unique mobility he has and scores a cracking individual try.

The Wallabies are 9 points down. There’s a very kickable conversion fifteen metres in from the sideline to come, which would bring Australia back to within 7. 13 minutes to go. Game on.

But Bernard Foley misses the kick, and we blow the momentum we’ve just gained.

And that really, as we’ve seen, was the story of the day. Through a combination of bad luck, interesting refereeing decisions, and poor play, Australia lost almost all of the key moments in the game—and with them, the match.