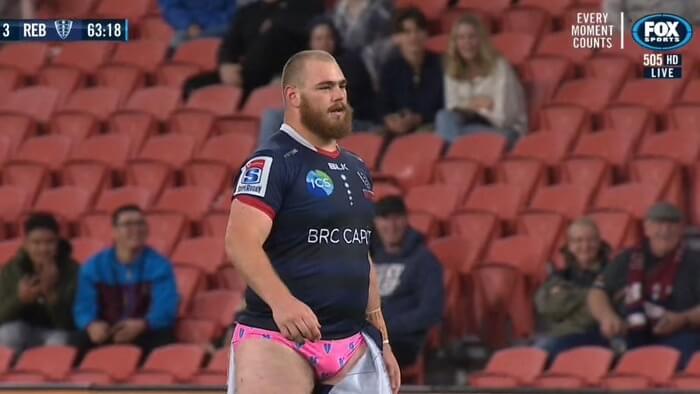 The Melbourne Rebels reach the finals with a last minute try.

The equation was pretty simple for the Melbourne Rebels,  win by four points and go to the finals.  Any other result, and go to mad Monday.

Playing against a strong wind in the first half, the winless Force showed from the very beginning they weren’t keen to make any gifts to their bitter rivals.
From the kick-off the boys from the West put pressure on the Rebels, but it was a 22-0 point turnaround either side of the interval that put the match in the balance until the last seconds.

The eventual hero for the Melbourne Rebels was South African Johannes Jacobus Cabous Eloff, prior known only for his pink underwear (see cover photo).

An early penalty by Melbourne backrower Hardwick gave the first 3 points to the Western Force, Prior easily kicked from in front the sticks.
The Rebels could have hit back quickly but they wasted an easy try opportunity with Michael Wells getting in the way of Matt To’omua’s pass to Tom Pincus, who would have definitely scored in the corner.
At the 18th minute, Wells wasn’t between To’omua and Pincus: the winger coming into the midfield after a 5-meter scrum in front of the Force’s posts collected a cut pass from the Wallabies flyhalf and scored untouched.
Embed from Getty Images

Pincus scores the first try of the game

The Western Force hit right back with Taefu collecting a short inside pass by McGregor, cutting in the middle of the Rebels’ defence. Like in last week’s game against the Waratahs, the Rebels showed their vulnerability to quit inside passes in the middle. Prior missed the conversion against the strong breeze.

To’omua scored two penalties in rapid succession to bring the Rebels five points ahead after 25 minutes of play but was Reece Hodge to score the second try.  Playing at outside centre, with the return of Dane Haylett-Petty, Hodge collected an incredible pass from prop Cameron Orr, yes you are reading it correctly, it was a fantastic long pass from the prop!

After just 30 minutes the game was over for James Tuttle, forced to leave the pitch with a hamstring injury. Fijian international Lomani came earlier than forecasted into the game to direct the forwards.

Prop Orr went over the chalk powering through the backs but the try was called back by the TMO due to obstruction.

In the dying minutes of the half, Hardwick was again penalised at the break-down by referee Gardner, with Force declined the easy 3 points and eventually scored with hooker Andrew Ready from a line out push.

Prior missed again the conversion from the sideline and the teams went to the sheds with the Rebels 7 points ahead.

Ready scored in a similar fashion from a 5-meter line out 5 minutes into the second stanza and with Prior slotting the conversion the game was squared off at 20 points each with 35 minutes to play.

The Rebels got quickly back into the Force’s red zone, but first Isi Naisarani than Billy Makes were inches short of scoring.

But the Western Force were again on the scoreboard thanks to a penalty kicked by Prior.

At the 55th minute, the Rebels lost winger Pincus yellow carded for slapping a pass with no chances to catch the ball. Minutes later Stander playing his 50th game scored try number 4 for the Force and Prior extended the lead to 10 points.

The Rebels all Green and gold backs Hodge, Koroibete and Haylett-Petty combined straight after for a superb try scored by the fullback.

In a constant twist of fortune, the Force also temporarily lost a winger, Byron Ralston tackling Matt Philip in the air on the restart, but the Rebels weren’t capable to capitalise the numeric superiority.

With seven minutes to play the try that could have given the all-important 4 points lead to the Rebels was disallowed as Hardwick pass to Koroibete was clearly forward.

Lee-Warner committed a cynical foul play 5 meters from his try line and allowed the Rebels to push for a season-saving try.

First, a knock on the try line than Matt Philip being held up denied again the Rebels in an agonising finish.

With two minutes to play the Rebels had a penalty in front of the post, trailing by 3 they choose to go for the scrum instead for the easy penalty that had brought the fame to the extra time.

After Ma’afu was again tacked inches to the try line substitute prop Eloff quick-thinking secured the win. With the hooker celebrating and all other players appealing to Gus Gardner, Eloff grounded the ball over the line clearly. After another interminable TMO/referee conversation the try was awarded to the Rebels. To’omua waited until after the siren to kick the easy conversion and history was made, at last.

Definitely Ready’s brace was a game-changer for the Western Force, but with the game being decided on the siren by Eloff’s try, the loosened try have to be mentioned as the most important play of the game.

Several players had an impact on the game, both forward packs played with intensity and it is difficult to split between them.
Having to chose one of them, we award the prize to younger lock Trevor Hosea.

Andrew Ready not only scored two tries for his team but was a constant danger at the breakdown both in defence and in attack and to round it up, his line out throws were also mostly straight, a not so common feature in Super Rugby AU.