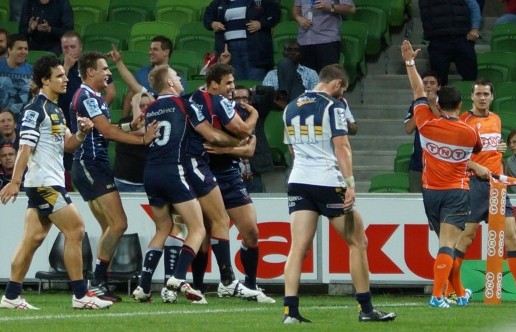 With their backs to the wall and an injury list as long as your arm, the Melbourne Rebels desperately need a win to restore some pride. The Rebels’ owners made a strong statement this week, could the players also make a strong statement on the park?

Against the bottom team, the Brumbies would have gone into this game sniffing a bonus point win to extend their lead at the top of the Australian conference.

In the first minute of the game the Rebels were awarded an opportunity for three points when Andrew Smith was penalised for a high tackle on Amanaki Mafi. Reece Hodge took the shot at goal but missed to the right of the posts.

Moments later it was the Brumbies with their own opportunity when Chris Alcock won his side a penalty at the ruck. The Brumbies soon earned a second penalty, almost in front, but elected to kick to touch. Sam Carter lost control of the ball in the line out and, after several minutes of sustained pressure near their own line, the Rebels cleared the ball to safety.

Eventually, Hodge secured the first points of the game thanks to a holding on penalty awarded to Mafi. Wharenui Hawera had a chance to equalise a few moments later after Mitch Inman was penalised for advancing in front of the kicker. His shot was wide and the score remained at 3-0.

The first try of the match came in the 13th minute. Marika Koroibete showed some strength and good foot work near the left touchline to stay in field. The Rebels spun the ball across field to Sefa Naivalu on the right wing, a couple of metres inside his own half. Super Sefa hit the after-burners and shrugged off four defenders on his way to the line. Hodge converted the try and extended the Rebels lead to 10-0.

A few moments later the game changed dramatically as Glen Jackson reduced the Rebels to 13 men with a double cheese combo. Colby Fainga’a was given ten minutes off for a lifting tackle against Sam Carter. Lopeti Timani was also sent to the bin to consider his actions after grazing Rory Arnold’s forehead with his shin. Fainga’a’s card may have been somewhat harsh; Timani could be considered lucky his wasn’t a different colour.

The Brumbies tried to set a driving maul from the resultant penalty but another turnover at the line out gave the Rebels a chance to clear.

Right on twenty minutes the Brumbies were able to benefit from their two man advantage. Jarrad Butler found Henry Speight on the right wing as the Rebels ran out of defenders. Speight had no one in front and a clear run to the line. Hawera missed the conversion attempt and the score stayed at 10-5.

Just on the half hour mark the Brumbies were in for their second five pointer, a push-over try to Jarrad Butler. This time Hawera made no mistake and put the visiting side in front 10-12.

Five minutes later a penalty for hands in the ruck allowed the Rebels to regain the lead with another three points, thanks to the boot of Hodge.

After the half time hooter sounded, Glen Jackson awarded Naivalu his second try of the night but was over ruled by the TMO. The replay showed a foot in touch after an excellent cover tackle from winger, Tom Banks.

Super Sefa celebrates the first try of the game

The Brumbies came out of the sheds firing. A couple of minutes of sustained pressure on the Rebels line ended in a third yellow card for a “cynical infringement” against Fereti Sa’aga trying to get back onside.

From the penalty scrum, Joe Powell found Speight on the blindside who dotted down in the corner for his second try of the night and his team’s third. Hawera’s conversion from the touchline missed but the Brumbies were in front 13-17.

The Brumbies may have had a fourth try soon after. Hawera elected to take on the line, missing an opportunity to pass inside to an unmarked Aidan Toua. Hawera was subsequently turned over and the Rebels escaped what could have been a turning point in the game.

Just inside the hour mark, Sam Carter was penalised for not rolling away. Hodge hammered home the penalty goal from 48 metres out to put the Rebels back within a single point.

Fifteen minutes later, Hodge had a chance to put his team in front with another long range penalty attempt from 51 metres but missed to the right.

With only four minutes left on the clock, Jackson awarded a scrum to the Brumbies for a forward pass. The Rebels pack put in a huge shove to earn a penalty against the feed. This time Hodge made no mistake and the Rebels took the lead, 19-17.

The win was almost sealed moments later with another penalty to the Rebels inside their own half. Electing to take a shot and run down the clock, Hodge failed to kick the ball dead and gave the Brumbies the chance to go the length of the field and steal the win. When the eventual knock-on came to end the game, the Rebels’ players and fans celebrated like they had just won the Championship.

Henry Speight, on the way to the first of his tries

An ugly win is still a win. The Rebels were out scored three tries to one and were on the wrong side of the ledger in most statistics, including having only 39% territory.

On the plus side, the Rebels showed some real grit and determination for eighty minutes to hold the Brumbies out and would be happy with their defensive efforts. In particular, the mid-field and back-row managed to keep the dangerous Brumbies runners in check and slowed down their ball effectively.

Next week the Rebels fly to South Africa to begin their tour of the Republic with games against the Sharks and Kings.

Last week the Brumbies, (aided by some abysmal defence), put 33 unanswered points on their opposition in the second half. In this game they failed to find their rhythm and never seemed to be able to sustain any real momentum. Their attack was disjointed and several times cruelled with errors and poor decisions.

They may be regretting their early plan to kick for touch instead of taking easy points when they were on offer.

Next week it gets tougher for the ACT team. They travel to Napier to take on last year’s champions, the Hurricanes. They then play the Blues at home followed by the bye. They will need a win against at least one of the Kiwi teams if they want to retain their conference lead.

In a tight game, the forward pass called against Jack Debcreczeni in the 75th minute should have been enough for the Brumbies to close out the game. The dominant Brumbies scrum should have seen them secure the ball for the remaining minutes. Instead, a scrum penalty to the Rebels against the feed gave them the three points they needed for a memorable win.

For the Visitors, Henry Speight had some electric moments, two tries, over 120 run metres and four line breaks are good numbers. Reece Hodge had a very solid defensive game and, in the end, it was his boot that made the difference.

Amanaki Mafi is the Green and Gold man of the Match though. He had the most runs in the game, many of them in heavy traffic, and was a constant menace at the breakdown.

Reece Hodge played a kind of fullback/centre hybrid role and was instrumental in shutting down Tevita Kuridrani. Henry Speight looked dangerous all night. Despite his yellow card brain fade, Lopeti Timani looked the goods at blindside flanker and Chibba Hanson put in another solid performance at hooker.

Queensland Reds wind back the clock in Kings win
UN-AUSTRALIAN ACTIVITIES: A round up of the other Super Rugby matches