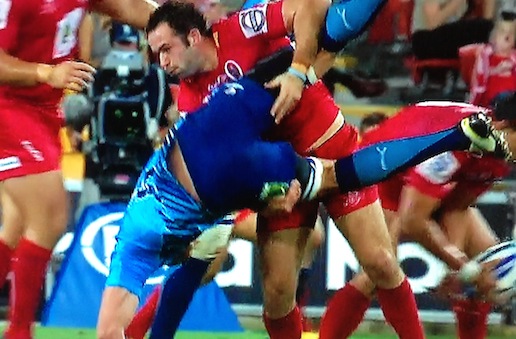 The Reds came into this game with a three-and-two record so far this season on the back of a lacklustre 19-12 loss against the Force last week. The last match between these two teams was in March last year at the height of the Reds’ injury crisis, when the Bulls won 61-8 in Pretoria. However, prior to this match the Bulls had never beaten the Reds at Suncorp Stadium and only beaten the Reds once in Brisbane (2004).

The match saw the return of James Horwill, Anthony Faingaa and Digby Ioane to the Reds’ starting side for a clash that many believed the Reds could not afford to lose. Whether the news this week that Ewen McKenzie would depart from the Reds at the end of the season would have any impact on the Reds’ performance was an unknown factor.

The Bulls made nine changes to their team after a 41-19 loss to the Crusaders last week in Christchurch where they conceded six tries. Regular Bulls and Springboks fly-half Morné Steyn started on the bench but was expected to be a threat when he came on to the field, having kicked five from five attempts at goal last week. 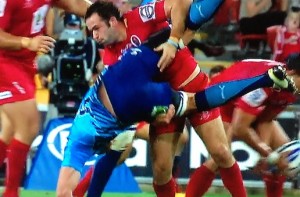 After a fairly even start to the match a farcical decision left the Reds a man short when Jono Lance was given a yellow card in the 11th minute after an alleged lifting tackle on Bulls lock Grant Hattingh. Two quick penalties to the Bulls gave them a 6-3 lead after 15 minutes.

The Reds had the better of the half and showed an intent to attack that has been missing in recent weeks. Good opportunities in the 22nd and 26th minutes were missed when James Horwill and Ben Tapuai dropped the ball when the Reds were hard on attack.

But it wasn’t until the 35th minute that the Reds finally clicked into gear on the back of a series of great plays from Will Genia. The speed of his delivery from the base of the ruck, his vision and the fact that he’s such a threat with his sniping runs make him such a threat for any defence and so it proved for the Bulls, with Genia having multiple touches before Quade Cooper broke through and popped a great ball to Lance who crashed over the line.

The Reds then finished the first half with a flurry and started to look like the team of 2011, but the Bulls held them out with the Reds taking a 13-6 lead into halftime.

The Reds came out in the second half and decided to play from their own half – a tactic that backfired when they conceded three quick penalties allowing the Bulls to grab back the lead after 49 minutes.

The previous yellow card was evened up in the 52nd minute when Grenton Mapoe was sent to the bin for another alleged tip tackle, this time on James Slipper, and the Reds took advantage from the ensuing penalty with a good try to a player who looked a lot like one we saw running around in 2011, Quade Cooper.

Both teams had chances in the final twenty minutes and the Bulls were denied a try after the bell thanks to a try-saving tackle from Chris Feauai-Sautia. The Reds held on to win 23-18.

The Reds had their big four (Horwill, Genia, Cooper and Ioane) on the park together for the first time in a long time and what a difference it made to their overall performance. They also scrambled really well in defence to keep the Bulls tryless. There were still plenty of errors but it was a step forward for the Reds tonight.

Finally, if those two ‘tip’ tackles tonight are the benchmark for yellow cards in 2013, rugby is going soft.

The two yellow cards had the potential to be game changers but for me it had to be Will Genia’s multiple involvements in the 35th minute to spark the Reds’ first try, which set them on their way.

James Horwill played a solid half of rugby in his comeback match. Jono Lance, Ben Tapuai and Digby Ioane were good and Quade Cooper had a fantastic return to form.

Despite playing only 66 minutes Will Genia was the absolute stand-out – the Reds look a completely different team with him on the park.

Brumbies Support Numbers In Attack
Brumbies blown away by Stormers