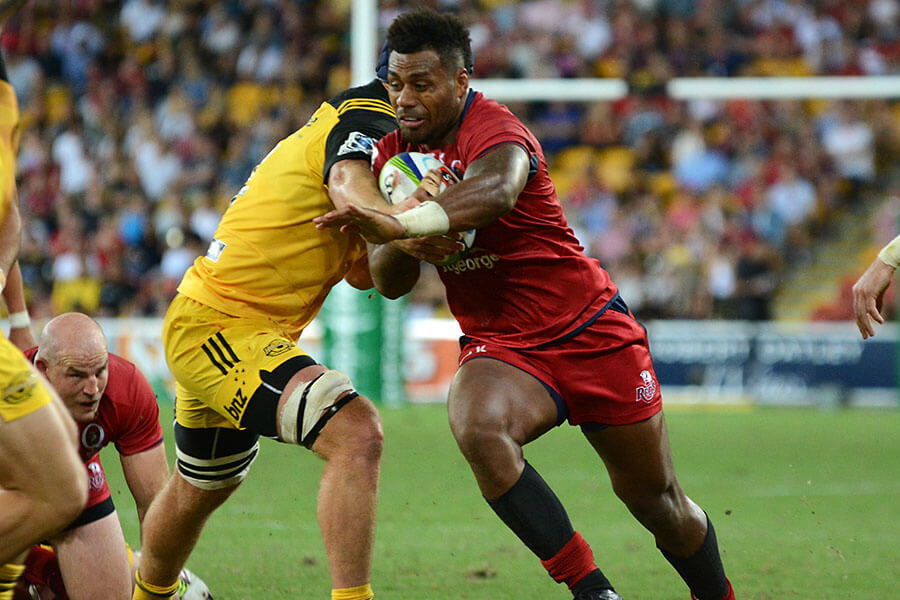 After the drubbing against the Sunwolves last week, the Reds had been written off by all and sundry coming into the away fixture against the ‘Canes.  Thankfully though, there were a few young blokes and a couple of older fellas at Ballymore that still believed the Reds could get up.

The Reds started well and after an early penalty were scoring a point a minute up until the 3rd minute before settling into their groove.  From the restart though they found them selves immediately under pressure inside their 22 when a horrendously slow ruck clearance from Ben Lucas resulted in Paia-aua being charged down in goal.  The Canes wasting no time to capitalise on the error saw Beauden Barrett cross for their first try.

Soon after, the Reds were awarded a penalty within range and with the wind really swirling around, Lance started his kick well wide of the uprights before it bent back and through.  Canes up 7-6.

The Canes were next to score through the unstoppable force that is Ben Lam and with Beauden slotting the conversion from the sideline the lead grew to 14-6.

The Reds got into their work and started playing tighter, gaining good metres through the old pick and go. From a 10m centre field scrum, they continued the pick and go’s before Taniela Tupou put his head down and drove over from about 5 out.  The kick from Lance was a good one and it was 14-13.

From the restart the Reds were immediately penalised for Angus Scott-Young clearing out too far past the ball.  It was a legitimate clean out that admittedly did go on a bit far but I felt it was a tad pedantic.  Given the penchant of most NZ sides to clear out well beyond the ruck from time to time, I was expecting to get a few of these calls back.  Sadly I was mistaken.  Apparently it didn’t happen again once in the match.  The Hurricanes kicked for the corner and weren’t able to turn the penalty into points though.

From a lineout 10m inside the Canes half, the Reds pulled off a nice set-piece move that put Kerevi though a hole who offloaded to Daugunu in support, running it in to score under the posts.  The conversion from Lance was successful and 25 minutes into the match, the Reds were leading 20 points to 14.

The Reds were defending well but after sustained pressure, Hurricanes No 8, Blade Thomson, hit and spin his way across the line for a try.  Barrett nailed the conversion and the Canes were back in front.  The half ended with the Hurricanes being awarded a penalty right in front.  Barrett slotted the goal to take his team to oranges up 24 – 20.
Embed from Getty Images

With the Canes having the lion’s share of territory and possession in the firsthalf and running into the not insignificant wind, I felt pretty uneasy about what the second half would bring.  I guess no one told the Reds that the second half would bring their demise but, because they seemingly came out from the break even harder. It took nearly 10 minutes of the second half before either team socred.  The Canes being the beneficiaries after a 5m scrum allowed them to set Ben Lam up in a 1 on 1 with Daugunu in plenty of space.  Daugunu seemed to stand off trying to push Lam toward the sideline but then slipped off the tackle and Lam made no mistake with this one, dotting it down with two hands.  Again Barrett kicked the conversion to extend their lead to 31-20. The Reds almost hit back straight away with Jordan Petaia in space up the sideline before the referee got a late knock on call from his assistant and brought play back.  Before I could get too annoyed but the questionable call from the AR though, Higginbotham made a good turnover deep inside the Reds half, moving it quickly out to Taniela Tupou who, with about a metre of space up the sideline, swatted Milner-Skudder away and goose stepped TJ Peranara before passing it back inside to Petaia who ran it in to score.  Lance continued the 100% kicking from both teams and the Reds were edging back at 31-27. Embed from Getty Images

The next 8 or so minutes were a real arm wrestle.  The Canes continued to dominate both territory and possession but the Reds physicality in defence and line speed was troubling them.  Then came the game changer.

At the 61st minute, the Reds had made a break up the sideline, they had a 2 on 1 overlap when the last pass was knocked down by Canes defender Peter Umaga-Jensen.  Admittedly they were still over 50m out but with a full back to beat and 2 on 1, the Reds were in a good position.  That’s the way referee Ben O’Keefe saw it to as he immediately blew the penalty and put his hand in his pocket for the yellow card.  What happened next was, quite simply ridiculous. TJ Peranara began screaming at O’Keefe to look at the replay.  O’Keefe was trying to talk to his Assistant and both had concurred that is was a deliberate knock down but TJ was relentless, his shrill screech not letting up until O’Keefe eventually caved and decided to look at a replay.

The replay showed the deliberate knock down and then Daugunu hold Umaga-Jensen for a second, which he is perfectly entitled to do once he touched the ball.  TJ Peranara could be heard, saying he’s holding him back, that should be a penalty to us.  O’Keefe seemingly gave up at this point, turning from a yellow card and penalty to Red to just a knock on.  To add insult to injury, at the ensuing scrum, replacement Reds scrumhalf, Moses Sorovi conceded a free kick for feeding the ball into the scrum with one hand instead of two.  We were back to refereeing to the letter of the law again.

The arm wrestle continued until the Hurricanes scored a very soft try through second rower, Sam Lousi, who took a beautiful short ball to stroll through and score.  The kick was successful and the Canes now had an 11 point lead with 12 minutes to go.

The Reds wouldn’t let up but and after 15 phases and about 4 consecutive advantages, Kerevi broke the line and ran it in to score a well worked try.  Lance completed the 100% kicking stat for both teams by nailing the conversion and it was back to a 4 point game with 6 minutes to go.

From the restart the Reds struggled to exit their half.  A really poor clearance from Lance gave the Canes a lineout around the 22 but a diabolical throw from the Canes hooker that was a good 3-4m crooked, but on the Reds side gifted the possession back.  They spread the ball wide but a couple of passes later they knocked it on.  The Canes seemed happy to just try and grind out the last few minutes.  The Reds defence pushing them back until a timely George Smith turnover won the Reds a penalty.  They kicked for touch but lost the lineout.  The Canes then spending the last two minutes, with one out runners, sealing off, rinse and repeat.

It was an excellent contest, there’s no doubt.  Contrary to what you might think from reading this review, I thoroughly enjoyed the match.  It was played at a very high intensity by both teams for the full 80 minutes and came right down to the wire.  But yet again, I feel like New Zealand referee Ben O’Keefe, will come under a fair amount of scrutiny for his and his all Kiwi officials team performance tonight; and rightly so.

I tweeted earlier in the week that I felt that O’Keefe’s position in this fixture had to be almost untenable. If he favoured the Reds he was over compensating for last week; favour the Canes and Australian’s rest their case.  He had to get it 100% right and no referee ever does.  Surprise surprise, he didn’t get it right.  Not even close in my book.  I mentioned the non-card and non-penalty for the deliberate knock-on howler above.  The exact same thing that saw Taquele in the bin for 10 mins under O’Keefe last week. But there were other shockers.  The pedantry around Angus Scott-Youngs clean out, Sorovi’s one handed scrum feed compared to the last two minutes where the Canes went straight off their feet sealing off, I’m guessing, 90% of  the rucks.  Not to mention Ardie Savea coming in not only from the side but almost the Reds side to clean out a Reds player also in the last two minutes.  Some of pedantry would’ve been good when TJ was taking 8-10 seconds to use the ball when it was clearly available, or the infinitely weird call of, “the ball is out” when it popped out of a scrum, but as soon as Sorovi pounced on it, he decided, it wasn’t actually out and he’d seen a penalty somewhere.

The NZ teams are hard enough to beat and even harder at home.  It’s not enough seemingly, just to play really well, or even better than your opposition.  The Canes should’ve played that one with one less man for 10 minutes but didn’t because Ben O’Keefe let himself get bullied by a screeching halfback.  Would it have made a difference?  I have no idea.  All I know, is the record books will show the Canes won, I’ll get called a whinging Aussie and the NZ vs AUS Super Rugby ledger will tick over to 40 straight.

For me it was easily the conversion of a penalty and yellow card to just a knock on at the 61st minute.

For the winning side, it’s hard to go past the immense capability of Ben Lam, the guy is a freak.  For the Reds, the easy picks would be Kerevi or Tupou but for me, in a performance built on defence, Angus Scott-Young had a huge game making 19 tackles and only missing 2.

If Taniela Tupou hasn’t earned himself a start or at least a bench spot against the Irish after tonight then I don’t know what he could do to earn it.  His scrummaging was excellent and his attack was on fire, scoring a try and setting one up with a beautiful run down the line.  Hooker Brandon Paenga-Amosa wouldn’t have hurt his chances either.  Clearly Angus Scott-Young is one to watch also, maybe not this season but in the coming years for sure.