Lions in control against Force

Lions in control against Force

It was a game of two halves and an additional 200 seconds. The Western Force stayed within two points through to the bell for the Lions to use another three minutes to earn a bonus point victory in Perth.

The Force kicked penalties when the Lions took risk. Can you defeat the Lions without scoring tries? Almost, but no cigar. 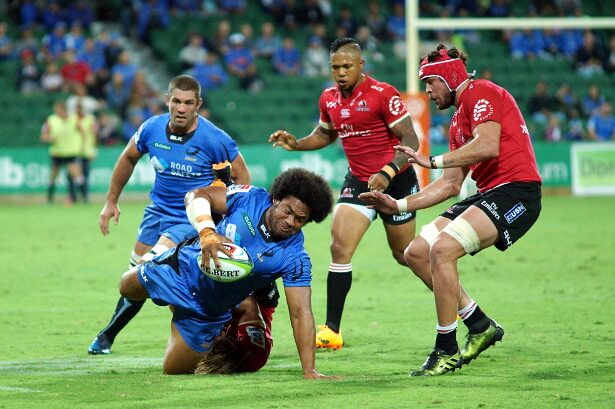 Tatafu Polota-Nau brought down as Hodgson, Jantjes and Whiteley look on

For much of the first stanza the Lions had the Force pinned in their own half. The Force exit strategy simply gifted possession back to their opposition. Gritty defence and some good turn over Force ball was neutered by the Lions’ kick return and possession.

As early as six minutes after kick off, this possession led to points from a simple line movement – started with the half back passing to the in-centre at first receiver, to fly half, then out-centre. Mapoe scored under the dot.

Jantjies converted the simple kick. At this stage 96% of the game had been played in the Force’s half. 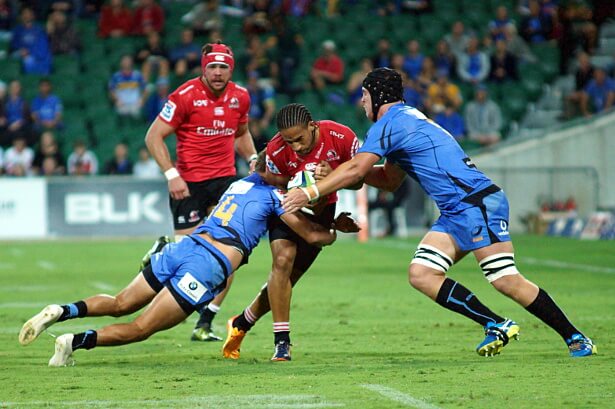 The first scrum was ominous – Pek Cowan was pinged for his bind. This was something that referee Mike Fraser would return to. Cowan was penalised a couple of times before leaving the field.

The Lions forwards pushed the limits in the rucks, slowing down the little ball that the Force had available. Three times the Lions were called to account by the referee. Ian Prior converted all three penalties. This did however mean that opportunities for Force tries were swapped for three pointers.

The Lions were only interested in five pointers and twice kicked for the corner when penalties presented themselves.

The Force defence was solid and kept the Lions side-to-side attack pretty flat. The rush was on the second receiver which quietened-down the dangerous Mapoe. It wasn’t enough. The Force implemented poor exit after poor exit, sooner or later the defence had to give. 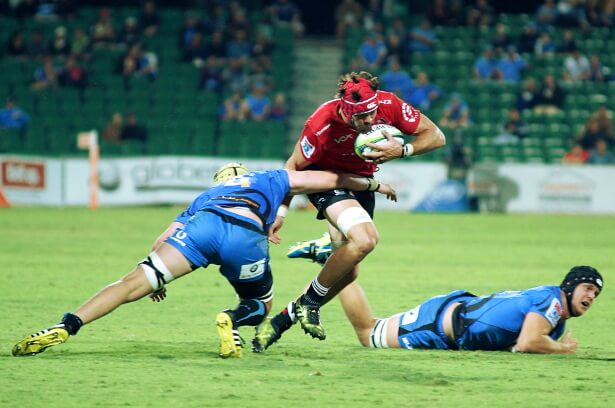 Advantage (for a line out maul collapse) was not required by the Lions. Skosan featured on second phase doing hard work through the pack for a good gain. Jantjies moved to second receiver ducking behind replacement centre Nel to feed outside.

The next phase he moved further out to third receiver behind Nel and Ackermann (slick hands for a forward). The ball flicked across the backline for winger Skosan to score by the corner post.

The stats suggested that the Force had been lucky – the Lions dominated with 60% possession, 62% time in the opposition half and four times the amount of ball inside the opposition 22. 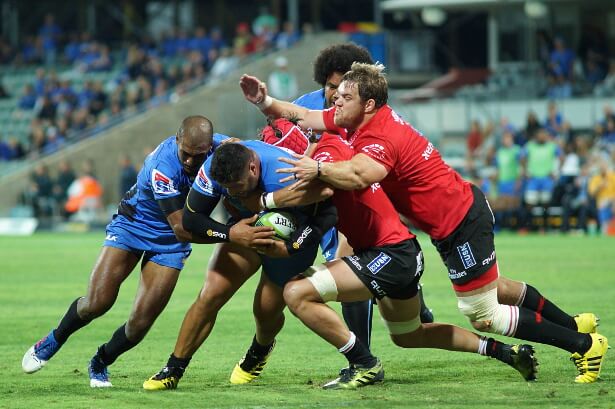 Wessels’ pep talk over oranges must be something very special. By the end of the second half the stats had very largely evened out. The Force rattled the Lions.

The Western Force intent came from the kick off which was short and was re-gathered. The ball was moved wide, side to side. Meakes threaded a grubber kick through the defence. This was chased hard by Brache and Verity-Amm who nailed the kick receiver and held him up. Force forwards were right behind to earn a scrum from the maul defence. The Force has woken up!

The Force continued the pressure around the 22. Again, the Lions responded by slowing the ball and infringing in the rucks. Again, the Force took the three points on offer rather than continue hunting for a try. Force 12 Lions 14. 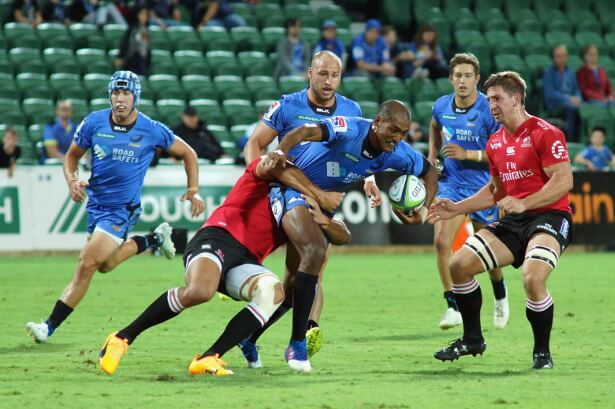 A Force knock on was collected by a player in front – off side penalty. This time Whitely steps in as the Lions seem to look again for the corner. If anything shows the Lions as rattled, this time they take the penalty kick. Jantjies makes it good to be five points clear.

The Force defence pinned the Lions in their 22. Things were looking much better for the Force. The Lions pressure relief was some excellent Jantjies’ exit kicking. The Force are let down by their handling and Ben Daley takes over from Pek Cowan earning scrum penalties for his bind.

Prior earned yet another three points from a penalty – high shot. Two points are the difference and would stay that way until the bell.

The Force’s injury woes will continue – Ben Daley left the field (knee) and Pek Cowan had to return, to the other side of the scrum. The bench was utilised and Jono Lance was immediately impactful. 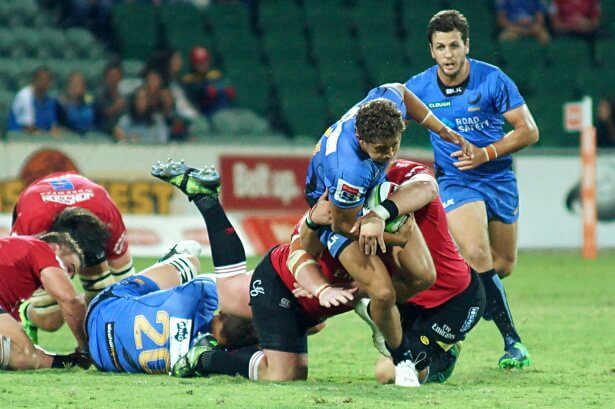 James Verity-Amm tries to break through

That two-point difference remains all the way through to the half time hooter. Ross Haylett-Petty was penalised swimming around a maul. Lions skipper Warren Whiteley calls for a scrum. to earn a bonus point try.

A scrum push over looked likely until the Force collapse – advantage to the Lions. Jantjies took his chances and scythed through the defence for a try and a bonus point win, and their sixth win in a row. 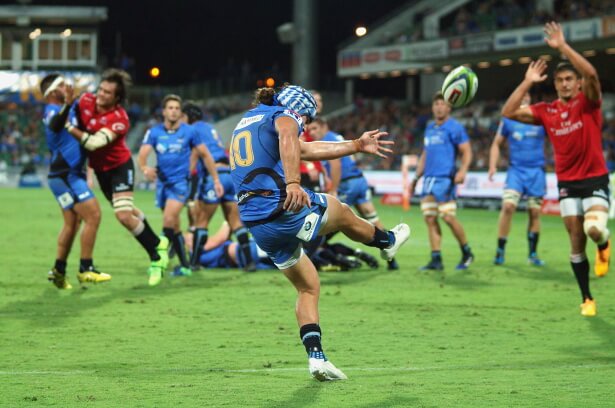 This game went to the wire. The game change was not until extra time when the Lions made a scrum call – to chase a bonus point try rather than an easy three points.

For his niggle at the breakdown, constant joie de vie for the game of rugby and his fearless decision making, MOTM goes to Lions captain Warren Whiteley.

Pek Cowan could be useful on both sides of the scrum, Ian Prior is an option when our half options are low and he can kick. Is Jono Lance a dark horse for fly half? 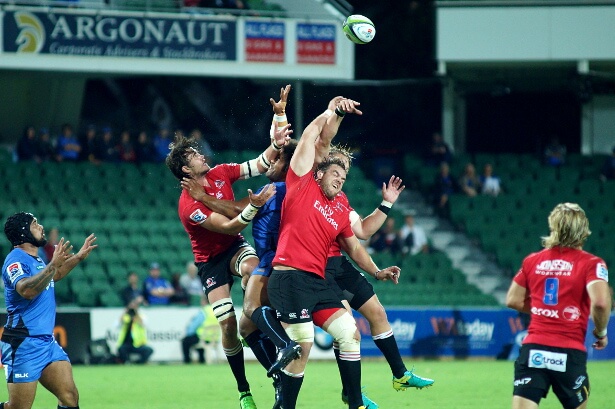