Sorry Reg, look away now. In front of 18,781 fans at Suncorp Stadium, the Waratahs have managed their seventh win in a row against the Queensland Reds, downing them 26-29  in a fiery encounter that actually, for once, truly lived up to the hype.

I hear the angry online rugby supporters circling… But I’m going to be honest here, coming from a neutral perspective: I really enjoyed this match. Both sides have had tough, tough seasons so far. The players confidence is absolutely shot. The fans are angry. So what did they do? They brought it back to one of the cornerstones of the game: the rivalry. And the rivalry was definitely there. 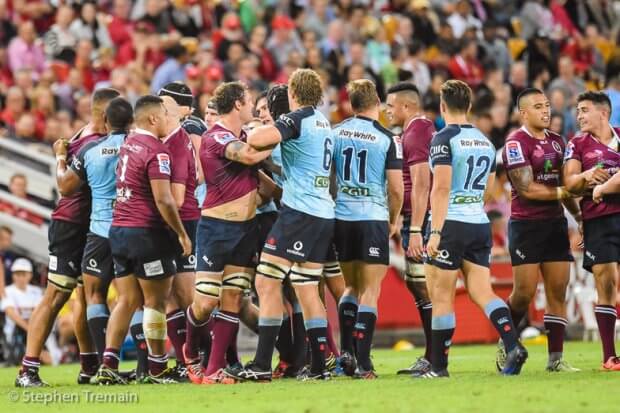 Plenty of feeling was on display

In what was the 2000th game of Super Rugby, the match certainly got off to a flyer, with both sides making it clear they were here to play rugby from the outset. The Waratahs grabbed a penalty inside the first minute and a few minutes later Foley tried to line up for three points to open up the scoring, but the conversion pulled to the side. As it turns out, it would be the Iceman’s only miss for the night.

The Reds on other hand, when they finally got the ball, looked dangerous. Ten minutes later, off the back of the Reds scrum, Higginbotham bought the crowd to their feet when he offload to Karmichael Hunt, who dived over for the first try of the night. Quade Cooper converted and the Reds were up 7-0.

However, eight minutes later the Waratahs equalised through Nick Phipps, who showed great strength to dive between three players. It sparked a bit of pushing and shoving between the old rivals, but the try was given and Foley equalised the scores. However, the Reds struck back almost immediately through Lukhan Tui, who was on the end of some magic from Karmichael Hunt. 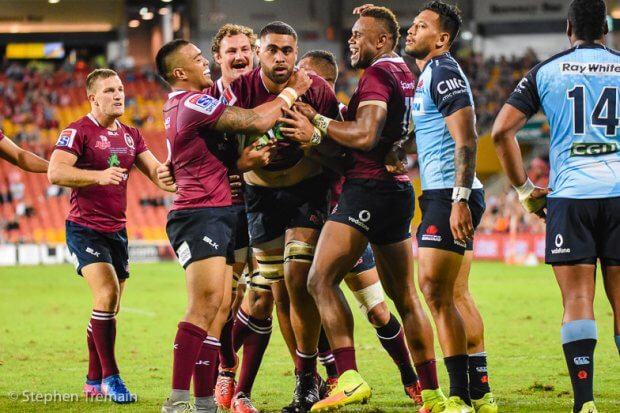 Lukhan Tui is congratulated on his first Super Rugby try

On the half hour mark, we got the try of the game, started by none other than Quade Cooper. Intercepting a flying Tahs pass, Cooper turned back the clock to 2013 against the Sharks and provided exactly the same kick to Izaia Perese, who picked up to score an outstanding coast-to-coast try. Cooper converted and the Reds were up 19-7.

However, the Waratahs weren’t done yet. Following three points from Foley, Michael Hooper found himself in space off a brilliantly orchestrated backline movement to dive next to the sticks and the Waratahs were two points back. Perese was then sent to the bin for one of the stupidest attempts of a tackle in the game, but it made no difference to the end score and the Reds went to the sheds with a two point lead. It was proving a fascinating game to watch. 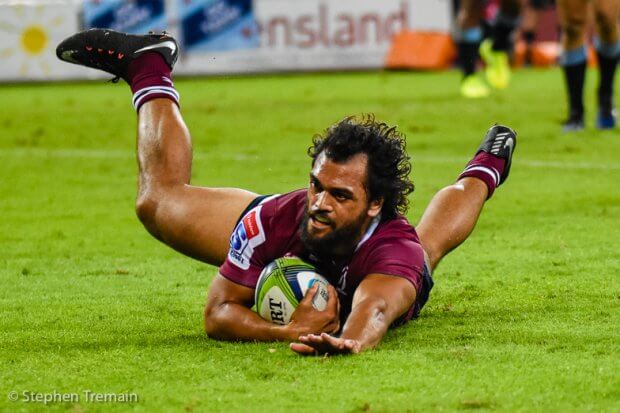 Foley quickly grabbed the lead  for the Waratahs for the first time in the 46th minute, but they didn’t hold it for long. Even with a player down, the Reds forwards were making an utter nuisance of themselves, and in the 50th minute, they had the crowd on their feet and roaring when Wallaby captain Stephen Moore dived over off the back of a brilliant rolling maul to give the Reds the lead back. Quade Cooper was ever reliable with the boot and the Reds were up 26-20. They were also back to fifteen men, so things were looking up for the Reds fans.

However, now I can definitely feel the angry fans circling, because if you support the Reds, this is where everything goes pear shaped. The penalty started to slip seriously in favour of the Waratahs, off the back of the scrum. However, while I myself wonder about the nature of those penalties; I cannot fault the Iceman. While the penalties may have been contentious, he took his opportunities and got the points. Quite frankly, from a Wallabies perspective, it was good to see him kicking so well. 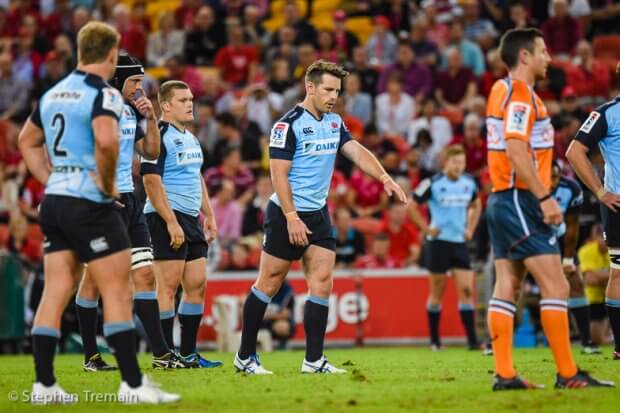 Bernard Foley and the referee dominated the second half

Three penalty kicks later, in the 77th minute, the Waratahs were leading 26-29. The Reds players (and fans) were livid, but backed their team to pull off a miracle comeback and grab the win. They strung together twenty three promising phases into the final minutes, and were looking good until the ball popped out of the ruck, and Skelton leapt on it. Matt Lucas kept his composure and passed it to Hooper, who banged it into touch to finish the game, and the roar of furious boos from the Reds fans erupted. 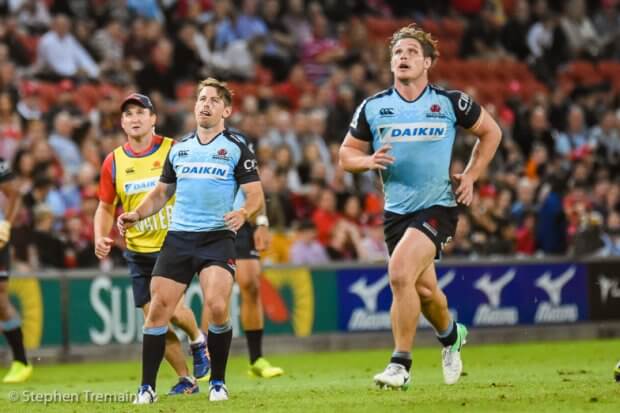 God, it was a tough night for these guys. They played with absolute pride tonight and no one can fault that they wanted to win this match badly. And to their credit, they were the better side on the field for over half the match, and players like Quade Cooper, George Smith and Karmichael Hunt were looking good. But, they did take their foot off the throat after the 50th minute, and did lack composure to finish off the job. Even the reserves couldn’t lift them up to finish it off.

However, I will admit that referee Paul Williams was tough on these guys in the second half, with a 16-5 penalty count against them. This will not help their already dented confidence one bit, and they face a tough assignment next week in Waikato against the Chiefs.

As much as the ref was on their side, the Waratahs still took their chances. Bernard Foley and Michael Hooper were the reason the Tahs were in the match to begin with, they had a great game for the visiting side. Their skills were a bit all over the place, but the Tahs took pride in the jersey too: they came to play. It was the first time in a while that I genuinely felt I was watching a derby grudge match between these two sides. Thank god that was there on display last night.

They face the Blues next week in Sydney, and if their skills stay the same as last night they probably won’t find themselves winning that one. Hopefully the fans will see something good in a WIN and come out and support them next week. 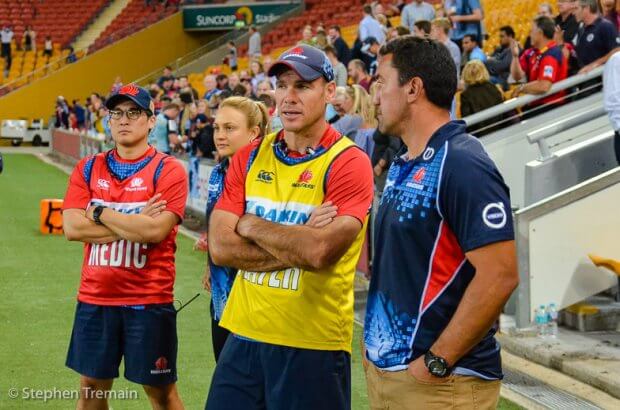 Honestly, the Ref. I myself have honest-to-god tried to pride myself on always being respectful of the referee (I have been one in the past), because it is such a hard job. Derby matches are always spiteful, but I don’t exactly know how to think when I look at a 16-5 penalty count. Were the Reds that undisciplined? It did play into the game, and influenced the result.

There were a lot of good performers tonight on both sides, but for me, Michael Hooper really continues to impress for the Tahs. He leads from the front, scored a try, and is always the go forward for the Tahs. He must be considered seriously for the test captaincy in my opinion (even though I personally  think Pocock would be better as a long term option, but we’ll have to wait till next year for that).

Who else? Someone, get Karmichael Hunt into a gold jersey. Even as a reserve, he would be great. His opposite number, Israel Folau, was quiet all night. Cheika, at least consider having him on the reserves bench. Doesn’t matter how much the bloke is paid, pick on how well he plays.