After Certificate-gate, we went all out.

It has been discussed, 2011 was a massive year for rugby. I worked out that I attended 11 Super Rugby matches and 19 Test matches in 9 different venues. I only mention that to illustrate how much rugby there actually was last year (and brag a little). It is important to quantify the amount of rugby in the calendar though as the player who you chose as Player of the Year for 2011 played almost as many minutes as I watched.

So let’s dive straight in and countdown to the winner.

At the conclusion of the Tri-Nations Australia had become the Tri-nations champions for ever. At this point James Horwill had not only taken over the Captaincy but also streaked into the lead, tying with Will Genia on 8 points and Digby Ioane was closing on 5 points. Interestingly, last year’s POTY David Pocock hadn’t even earned a point. How would the World Cup change things?

End of the Rugby World Cup David Pocock had made a great run to lead the voting on 12 points. Will Genia was keeping in touch with 10 points and James Horwill was only a Man of the Match performance away on 9 points. All up, it was down to our European tour match against Wales to decide the winner. And some people said that match was a waste of time!

The conclusion of the season meant not only a well-deserved break, but also we knew who our winner was. Or did we? 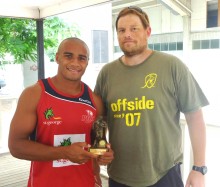 A trophy AND bubble wrap...

For the First time in the history of the G&GR Player of the Year award two players were tied for points at the end of the year. A count back was needed as David Pocock and Will Genia had both finished on 12 points. As we are a site that values consistency, we thought that would be the best way to determine a winner, so we looked back through the results and While Poey had polled in 4 tests; Will had polled in 6, Making Will Genia the Green and Gold Rugby Player of 2011.

I had the chance to present Will’s trophy personally. He reads the site and was genuinely chuffed to have been voted by the learned readers of the site. He assured me the trophy would find a home on his shelf next to his Premiership and Tri-Nations trophies. He was however more excited about being able to pop the bubble wrap the trophy was in :)

Have fun and Congratulations Will.

The final table stands as follows: