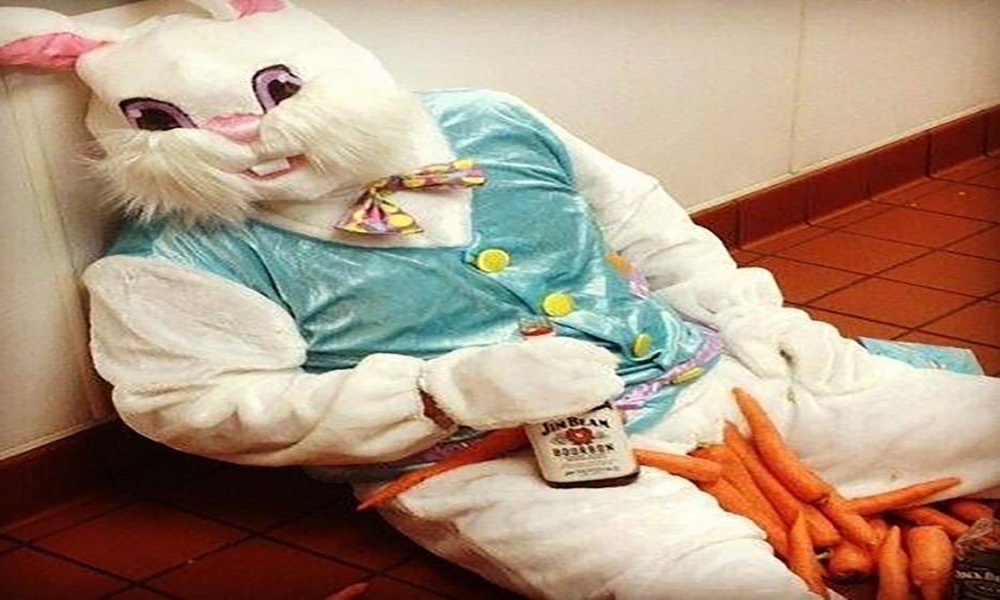 'Good Friday my arse. I'd kill for a cheese burger'
Friday’s Rugby News

Welcome Gaggers to the holiest of times on the Christian Calendar, Easter. When a young backpacker on a Middle-Eastern ‘gap year’, and break from his over-bearing parents, invented chocolate.

Good Friday? Rugby is back and with so much rugby news it’s not just a Good Friday, but a Great Friday!

Today let’s take a look at Friction in the Union as a RA ‘source’ lobs a grenade north of the border. Fill your boots with free stuff with Rewarding Mediocrity. Look into SRP #9 teams, times and predictions. Look at how best to Polish a Turd and what lays in wait for Oz sides from next next week. And round it all out with The Friday Goss with Hoss, now 3 days sober sober-ish.

FRICTION IN THE UNION

What moron from RA would go on or off the record and start slinging mud north of the border at ‘possibly’ Australia’s best rugby coach? For the first time in a while, us Oz rugby fans seem to have a fair bit of pedigree coming through for future head coach gig of the Orange ones and about bloody time too.

Georgina Robinson reports in the SMH an anonymous senior RA figure as saying Thorn is ‘not a team player’ when it comes to the national setup. Now call me old-fashioned but the comment strikes me as both dumb and completely oblivious to the fact that the QRU was also hosting a Wallabies camp this week! I mean really, could you get any dumber?

You could mount reasonable arguments for Chuckles or The Padre’s ascension to head coach role. Both are consistent, run good rugby programmes and have done their apprenticeship in Oz. For mine The Padre has his nose in front at present due to the fact he rebuilt the Reds and their programme from ground up. Inherited a squad of potential and made them, IMO, the best side in Oz by some distance (I am sure the Kiwi sides will shine more light into that statement).

Either way, we have some terrific options for future Wallaby coach. At the Tahs Coleman has quickly galvanised the side into a more competitive side but will need to show over years that he is a contender. Simon Cron returns to the west, well-credentialled, but now in the big chair he too will need to get consistent runs on the board.

Somewhat surprisingly, I find myself agreeing with Mr P Kearns who was quoted in the same article as saying: “If you’ve got three or four candidates that are all world-class, it can only be a good thing. In fact, if you have already anointed the successor a number of years out, then that pushes other potential candidates away. Let’s keep them all competing for that job.”

What do you do with a perennially underachieving side? A side who has not held a significant trophy (outside a World Cup year when TRC/4Ns has seen shorter comps & weakened opposition) for nearly two decades – that’s right near on TWENTY years. Whose most recent 12 months saw it with a 50% win ratio. Who have been found mentally fragile and incapable of winning enough ‘pressure moments’ to be considered a serious contender for the RWC next year?

Why take them into a camp and ply them with a heap of free gear from sponsors – that’s what! SMH article here

From $250 boxes of Lego, free boots – playing and dress wear, copious amounts chocolate and and enough free booty to make a pirate blush. And all this ‘kit’ with headlines and stories in the background with reported $1.4m OS offers for a fullback. I repeat a FULLBACK!

I get the players are only human and ‘free stuff’ is ‘free stuff’ and yes, I would partake in the free chocolates, but not the Lego Land Rover Defender unless it also came with a Lego Tow Truck and repair centre. But it gets me thinking about culture and accountability. Just what message does it send to those in camp? That mediocrity on the paddock over a sustained period is not just ok, it’s expected and it’s going to be rewarded. Is it any wonder our national rugby side can’t get out of its own shadow of sub-par performances? The bar is set so low that below-average is fine, it’s expected and here, have some free shit as a reward!

Maybe I am over reacting, I mean it’s just free stuff right? Perhaps, but after finally watching The GOAT Richie McCaw’s doco ‘Chasing Great’ this week I didn’t see him sneaking back to his room with bags of free kit. I saw him focused, pushing himself and determined to achieve something no one else has ever done and in doing so, achieving greatness. And all this without a broke down Lego car or chocolate wrapper to be seen.

Our last ‘Kiwi-free’ sojourn. All teams, times & coverage courtesy rugby.com.au ‘Fearless Predictions’ courtesy of the bourbon cupboard at The Ponderosa.

Whatever team you follow, don’t miss this one. Blues in form having shut-out the Chiefs last week and the Crusaders, well, they’re the Crusaders. More on the quality of Kiwi sides so far this season in the article below.

On form so far this year you would think this an easy game to pick and The Communists by plenty, wouldn’tcha? But I just have a feeling that the Rebs are specials here. It’s not based on reason or fact or form or any semblance of common sense (you’re new here aren’t you) so I will leave it to The French Waiter from ‘Meaning of Life’ to explain my reasons here. But with Damon Murphy in charge, expect it to be a horrid spectacle.

Fearless Prediction: The Scum by 8

The rest of the season will be a lllllooooonnnnnggggg one for MP as the Kiwi sides look to have taken the intensity it up a notch or two and MP will get burnt.

The Landers have broken their ‘duck’ this season and will be looking to make up lost ground when they cross the dutch next week. Until then I can’t see them getting past the Canes this week.

It appears that us Oz Rugby Fans may have been somewhat living in a ‘bubble’.

Since the kick-off of SRP I have whinged noted on this sacred site the lack of quality rugby, nay, complete shite Australian sides have dished us up this year – naturally excluding the Tahs (derrr) – in the name of ‘rugby entertainment’.

Last week I was sent further into despair and was jolted into a sobering reality when I watched the Blues v Chiefs fixture. The brutality, alacrity, clarity of purpose, sheer effectiveness and rugby intelligence shown at the ruck was simply just incredible. Players individually AND collectively made terrific decisions. When to attack, when to stand off. And it wasn’t just the individuals decisions that stood out, but the collective understanding between players was ‘next-level’ and the precision they displayed got me feeling rather nervous for Oz rugby.

Then, when they had the ball, the alignment, speed, skill execution and complete awareness of all involved was again something to behold. Indeed at one point Mrs Hoss literally said ‘you’re quiet while watching rugby’ and Mrs H was right, very right. It dawned on me the same way that watching ‘Deliverance’ for the first time, dawned on me. ‘They want to do what? They can’t, they won’t. They did. Bloody hell that’s brutal’.

Now, like any ‘bubble’ one ‘prick’ and the bubble bursts. The reality is Oz Rugby fans have an UnZud plane full of rugby assassins headed their way next week and I reckon the rest of the SRP regular season is going to get messy for us Oz fans, real messy. The rugby on offer across the dutch last few weeks is years ahead of anything Oz sides have shown this year. Our games have been dull, mistake ridden, dour and downright dreadful spectacles. Indeed I’d wager there has NOT been a decent Oz game all year. And I challenge you to show me otherwise. I am talking a full 80 minute match of quality, precision, pace, skill and intensity that rivals, hell, I’ll take ‘comes close to’ that of the Blues v Chiefs fixture? Yep, thought not.

So with that said, what does success look like for Us v Them? For me if we get a collective five wins against them (two each for Reds & Ponies, one for the Tahs), that would be the barest acceptable level. Personally I can’t see any more than that – can you?

Bloody sobering if you ask me.

WWOS reports Taniella ‘The Abattoir’ Tupou is not only in line to miss the Poms’ Brissie test as he welcomes child #1 to the world, but is also 100% keen to ‘test himself’ OS after RWC2023. I say he’d be mad not too wouldn’t he! On the baby front, I would say it’s incredibly selfish of him to have a baby at the same time that I have tickets to the ‘ Festival of the Gilbert’ in Brissie in July. Here’s to a healthy bub for TT and loved ones.

FUX Sports‘ Christy Doran reports that Folau ‘Palestine’ Fainga’a might be headed west from next year. Interesting move given they already have Feleti Kaitu’u, who has suffered second year syndrome and seemingly regressed this year. With Billy Pollard looking a real find for the future at Ponyland I don’t think FF will be missed much.

We are, and always will be, a net exporter of rugby talent. So why the articles and ‘panic’ every time a player signs overseas? The latest reported departure is Tom ‘Bastards’ Banks on a rumoured $1.4m per year to a Japan club. As a rank capitalist I have no problem with Bastards’ decision, or those before him or the many that will follow after him. It’s pure Keynesian market forces in motion. A player is ALWAYS coming up behind them. It’s the natural evolution of the code and the market. Long may it last, for when China eventually invades us, well……….

News this week from rugby.com that Harry Johnson-Holmes (HJH) from the Tahs has recommitted to Oz Rugby, meaning he had no offers from overseas. Glad to hear the news for two reasons:

I know it’s Easter and resurrection and all that stuff, but Eddie returning to Oz coaching as one of those themes? Maybe so, according to failed FUX Commentator and Rugby Bid Big-Wig P Kearnsy. planetrugby.com reports PK is a vocal card-carrying Eddie fan. If indeed Dr Evil does ‘build resilience’ in younger players than who am I to say no. As per the article above, somebody needs to shake up the malaise that are the Wallabies.

In heart-warming news for ageing, follically challenged men everywhere, a glimmer of hope. Former Wallaby captain, legend and all-round great guy Stephen ‘Squeak’ Moore will travel with The Reds to Melbourne as a ‘standby’ for the Reds this weekend. I don’t wish injury on anybody, but jeez it would be good to see Squeak on a SR paddock one more time. Who says there’s no country for old men!

Enjoy the Easter break & more than anything – be safe. You are better off being an hour late, than a statistic.