Force hold on in thriller with Rising 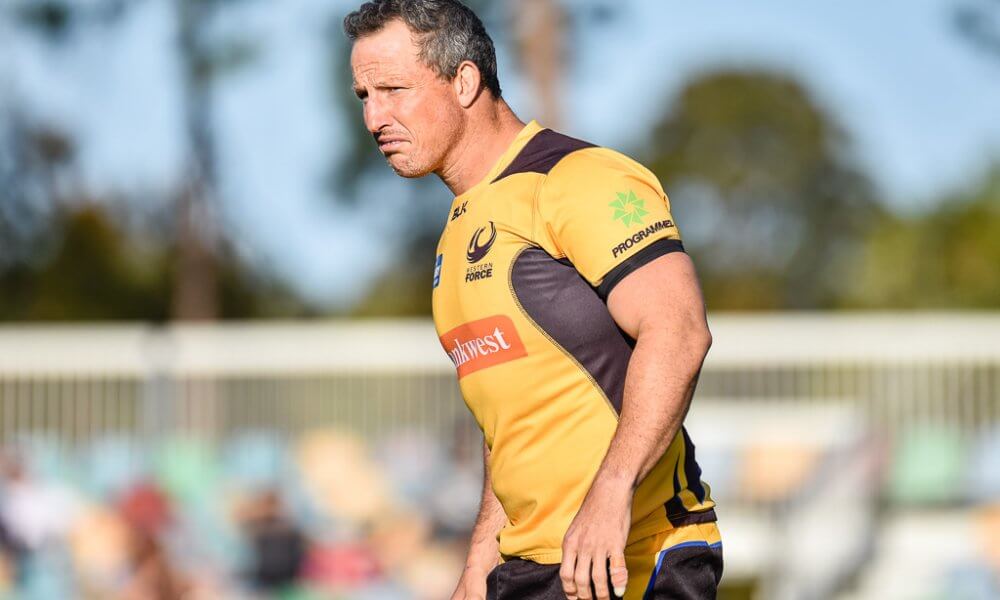 Force hold on in thriller with Rising

It took the Melbourne Rising six weeks to find their compass and to play a match in Victoria at GMHBA Stadium in Geelong. The Western Force were looking at continuing their good form winning four of their five matches. This match was somewhat of a reunion with former Western Force / Perth Spirit players Mees Erasmus, Richard Hardwick, Isi Naisarani, Anaru Rangi and Michael Ruru playing for the Rising. Whilst former Melbourne Rebels Heath Tessmann and Jack McGregor were playing for the Western Force.

Inside a minute Laurie Weeks got in an awkward position trying to lay a tackle on Harrison Orr, Weeks was able to walk off the field, but his afternoon was over in a flash with a head knock.

Heath Tessmann scored his 8th NRC try when the Force just rumbled over from a maul from an attacking lineout. Ian Prior missed the conversion from wide out and the Force led 5 – 0.

The Rising charged down a kick from Jack McGregor immediately after the kick off, Richard Hardwick was unable to hold on to the ball after regathering it.

A short time later after their own attacking line out and seven phases the Rising thought they were over through their own hooker Andrew Tuala. Tuala had burrowed over the line. However, the TMO could not see any grounding of the ball and ruled a no try.

The Rising were peppering away at the Force defensive line and after 17 phases Harrison Goddard was able to put one of the ex-Force players Richard Hardwick through a hole and over the line. Archie King converted the try to give the Rising a 7-5 lead after 16 minutes.

After a rolling maul, Sione Tuipulotu made a break to gain 40 metres for the Rising but Archie King was unable to hold onto the ball and the Force were awarded a scrum 30 metres out from their defensive line. The Force again earnt a penalty from the scrum.

Rising made a break from their own half after a lineout with Archie King stepping through the Force line and offloading to Tom English. English then passed to Kemu Valetini and after a couple more phases Pone Fa’amausili was held up over the try line.

After the attacking scrum the Rising went down the blindside with Harrison Goddard to Sione Tuipulotu who passed on to Tom English. English stepped, weaved and spun near both the try line and touch line but was driven back by some strong Force defence and English lost the ball two metres out.

The Western Force again dominated a scrum where the Rebels had the feed 30 metres from their own line and received a penalty. Andrew Deegan found touch ten metres out. Unfortunately for the Force they were unable to win the attacking lineout.

Harrison Goddard and Archie King combined to create a hole in the Western Force defensive line and the Rising were awarded a penalty when Tessmann tackled Goddard high.

Tom English put in a poor kick that didn’t find touch just before half time. As a result from their own 10 metre line, the Force went on the attack. A pass from Deegan found the ground but also found Jack McGregor in space on the wing. McGregor stepped inside Isi Naisarani and blew through a hole between Naisarani and Rob Leota. McGregor ran 25 metres down the touch line before putting a kick in, which sat up perfectly for Brynard Stander to go over and give the Force a half time lead of 12 – 7 after Ian Prior converted.

The story of the first half was an intriguing battle in general play between the forward packs with the likes of Isi Naisarani, Harrison Orr and Brynard Stander in the thick of the action, the Force dominant at scrum time and handling errors from both sides (Rising 5 Force 4).

The Western Force took advantage of a penalty when Jack McGregor was tackled in the air by Rob Leota from the kick off. From the line out near half way, a wonderful inside ball from Rodney Ioana put Tevin Ferris through the line and he made ten metres before popping the ball to Harrison Orr who linked with Rodney Davies. Davies was hit in a try saving tackle by Angelo Leaupepe. A short time later the Force were awarded a penalty for offside. From the lineout the Force went back to what was successful for them in the first half. The rolling maul saw Tevin Ferris ground the ball and Prior added the extras to give the Force a 19 – 7 lead.

The Rising provided some dynamic rugby to go eighty metres to score under the posts. Angelo Leaupepe fielded a kick from Ian Prior on his own 22. Leaupepe charged down field beating three tacklers before being brought down on half way. The Rising spread the ball from right to left, where Tuipulotu stepped Brad Lacey and went between Lacey and Ian Prior. Tuipulotu gained another thirty metres before passing to Michael Ruru who passed inside to Kemu Valetini for his first NRC try.  Archie King converted to reduce the Force lead to five points.

The Force received another penalty from a scrum but Andrew Deegan’s kick from touch went touch in goal.

Leaupepe was at it again a short time later, with a chip and regather in mid field. However, he was isolated at the breakdown and Rodney Iona helped himself to the ball and blew through the Rising defence gaining 40 metres before a flick pass inside was unable to be regathered by the Force.

Chris Heiberg for Force made a massive break running 40 metres before being floored by Justin Marsters. The Force knocked on shortly after. From the scrum the Rising scored one of the tries of the season. Michael Ruru found Archie King who stepped and jinked before offloading to Kemu Valetini. Valetini offloaded back to Ruru who provided a sublime behind the back, flick pass to Justin Marsters. (Do yourself a favour go and find a replay of the flick pass) Marsters ran 20 metres before finding 2018 NRC leading try scorer Tom English near the wing who went over for his 20th NRC try. Archie King added the extras to give the Rising the lead 21 – 19 with 20 minutes to go.

Michael Ruru then kicked the ball into touch on the full after the ball was taken back into a 22. A short time later the Force received a penalty after Andrew Deegan almost had his head ripped off by Sione Tuipulotu. Cameron Orr was this time the beneficiary of a driving maul from the attacking line out putting the Force back in front 26 – 21.

Isi Naisarani scored under the posts after having several involvements in the play after picking the ball up from the back of the scrum on the Rising’s attacking 22 metre line out. Incredibly, it was Naisarani’s 18th carry of the game. Although Ruru looked to have got away with a knock on at a ruck in the lead up to the try. Archie King converted, and the Rising led 28 – 26.

With five minutes to go Rodney Iona got the ball just inside his own half he held the ball up and went between Rob Leota and Esei Ha’angana before running 30 metres and passing to Clay Uyen who scored the try despite the best efforts of Archie King. Jack McGregor missed the conversion and the Force’s lead remained 31 to 28.

From the back of a scrum Brynard Stander ran thirty metres, Iona was involved again and found Jack McGregor, who ran out of room and was forced into touch. With less than a minute to go, the Rising needed to go 95 metres to win the game and took a quick lineout. After 11 phases, Sione Tuipulotu put through a cross field kick which the Rising regathered and then after another seven phases Richard Hardwick was tackled high near half way. After the siren, the Rising had an attacking line out on the 22. A short time later as Michael Ruru crabbed across field and as a result of some pressure from Brynard Stander, Ruru knocked on. The Western Force moved into second on the NRC ladder holding on for a 31 – 28 victory. The Rising with the squad they have, one win from six matches is very disappointing.  Next week the Force host the Fijian Drua at UWA Sports Park in a top of the table clash, while towards the other end of the table the Rising finish their season at (my old school) St Patrick’s College, Ballarat against the Sydney Rays.

Inside the final five minutes the brilliant dynamic run from Rodney Iona to set up Clay Uyen for the match winning try.

The man who set up the match winning try Rodney Iona made a number of dynamic runs throughout the day and was best player on the ground.

Not sure if he is a rising star, as he burst onto the scene a number of years back (but he is a Rising star), Isi Naisarani was involved approximately three more times than any other forward on the field. I was also impressed with the work of Harrison Orr for the Force. Angelo Leaupepe and Jack McGregor also showed flashes of brilliance.