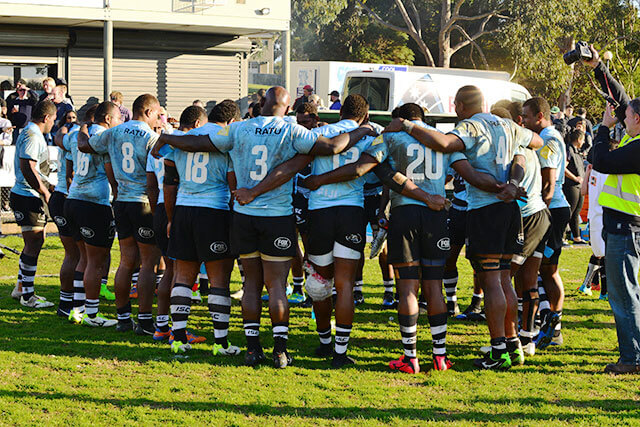 In this top of the table clash, the Drua, at home for the first time this season, look to be strong favourites after their very convincing last two rounds against NSW Country Eagles and Melbourne Rising. Perth Spirit have done well to operate in the limbo-vacuum caused by the decision to ditch the Force and need a win to keep their momentum going in this odd space.

It took a while to score first points

With more than 6000 people at the stadium it was always going to be a good afternoon of rugby.  Perth Spirit had more than their fair share of ball early in the match but the Drua weren’t giving any quarter, forcing errors and making their physicality felt in the tackles.

In the first 15 minutes Spirit should have benefited more from their 78% time spent in opposition territory but it was the Drua, through beautiful kicks from their scrumhalf Frank Lomani, that had the momentum.

And when they let that loose, it conquered all.

The Drua built lovely phases through the centre of the field and following a great mid-field kick from Apete Daveta that he regathered only 7m out from the line.  Peni Naulago carried it forward only to be held up over the line.

The scrum on the 5m line was masterfully driven forward by the Drua and then Lomani took it to the short side and crossed for the Drua’s first try at home.

And then it was a deluge

Only a few minutes later the Drua crossed again after scrappy ball became quick ball from Kini Douglas to Peni Raidre to Vasiteri to Apisalome Waqatabu who touched down under the posts.  Absolutely stunning passing, with the players running onto the ball instead of waiting for it to arrive, flat-footed.

The Spirit must have suffered deja vu with a third try following on the heels of the Drua’s second.  John Stewart took advantage of a turnover with a beautiful grubber kick, which Lomani then toed ahead.  He was taken down a metre out from the line with Raidre sealing the deal.  In 8 minutes the Drua were up 19 points.

Perth Spirit started to make a few errors, perhaps in response to the gulf on the scoreboard.  What should have been a sure try to Richie Arnold was fluffed as he coughed it up over the line.

Just before half time Stewart powered to cross the line as half time beckoned off the back of some fabulous passing from his backline – Douglas to Waqatabu to Stewart.  Bloody beautiful.

The Drua made several brilliant attacking plays in the second half.  And then did what almost no teams do in NRC – pointed to the posts for a penalty!  What a novelty.

Even when the Drua through loose passes they weren’t punished by the Spirit.  In fact, they most often regathered and continued their forward momentum.  A crossfield kick from Mosese Voka to Vaseteri was gathered by Seru who crossed for the Drua’s 5th try.

It was Isi Naisarani who finally saved the title defenders from the ignominy of finishing with zip next to their name as he crossed for Perth Spirit in the 69th minute.

And wanting the last word the Drua finished with a final try, fittingly, to their captain John Stewart.

The Drua have bought the full package to NRC – defense, attack and passionate fans.  Three full seasons in, most of the Australian teams couldn’t master the balance between defense and attack.

The change to the points allocation may have made a difference and overall NRC teams this year are certainly stronger in defense with not as many 80pt blow outs.

The Drua have a very dangerous backline and their scrum is showing real strength.  They definitely need to clean up their penalties and decrease/delete their yellow cards.

I will admit though, I would bloody love if they took out the toaster in their first season.

Which of course is both good and bad for the ARU.  What does it say if one of our neighbours with virtually no funding can take out our second tier competition?

The coffin nail of John Stewart‘s try in the first half – the Spirit never recovered from going into the sheds at half time down 24-0.  The Drua on the other hand kept hammering more nails in.

John Stewart’s leadership, two tries and his presence seemingly everywhere in the back line was quintessential Fijian Drua.

With the ARU announcing this week that the four Australian Super Rugby teams could each sign one Drua player next year, you can be sure the SR coaches are following these matches quite closely.  For mine I would look at the flexibility of John Stewart or Peni Raidre because it seems we have no bloody 8s at all in this country.