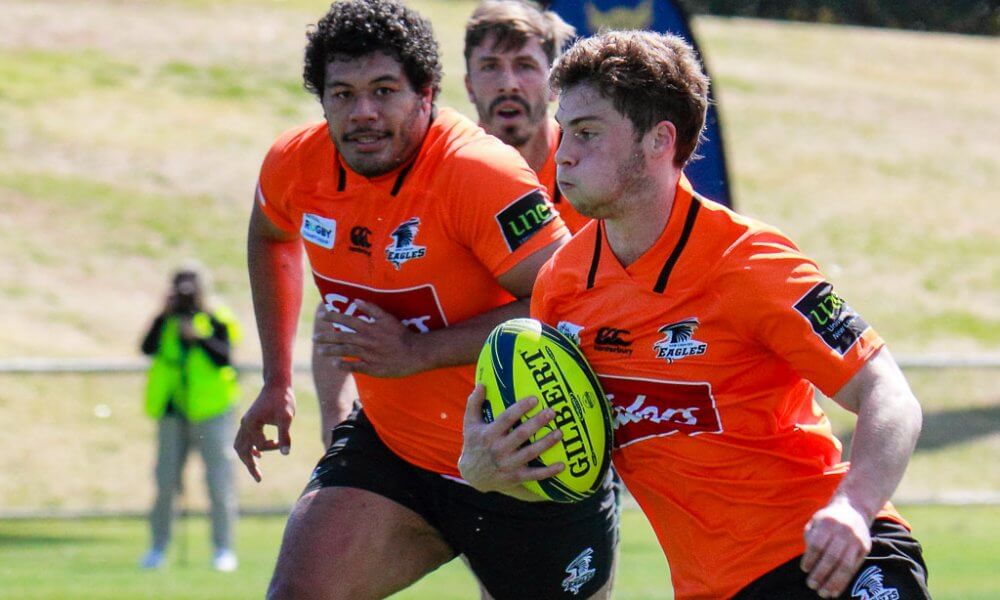 The NSW Country Eagles hang on against a resurgent Melbourne Rising, with a 29 – 19 victory.

The Rising headed into their second home game of the season in Adelaide after a big loss against the Canberra Vikings. Rising fly half and Barossa Rams product Michael Moloney had two genuine home games, with last week’s game being played at his Dewar Shield home Box Hill and this week heading back to South Australia. The NSW Country Eagles reached the Apex in Dubbo taking bragging rights over Sydney in a high scoring thriller and headed into this match as the favourite.

NSW Country started the game with Michael Icely pilfering the ball just outside the Rising 22. Pat Morrey was penalised a short time later for not releasing in the tackle, which set up a five-metre line out for the Eagles. Hooker Aaron Blacklock benefited from the maul after the lineout and put the Eagles up five nil after a minute and a half.

The Eagles regathered a box kick from Jake Gordon on halfway. After a number of phases the Eagles found themselves in the Rising’s 22. After a turnover the Rising kicked the ball away and the Eagles were on the attack again. Tom Stainforth threw a ball that was intercepted by Rising winger Nailati Ukalele, who was able to break a tackle from NSW Country fullback Tim Clements. Ukalele ran over 80 metres and finished his run with a swan dive in the corner to get the Rising on the scoreboard and to level the scores.

Ukalele made another good run a short time later, gathering a kick, running into Eagles’ territory before a Rising knock on turned the ball over. The Eagles spread the ball wide and cut out pass from Mack Mason saw winger Mark Nawaqanitawase run for 25 metres and then tried a chip and chase but Rising winger Lolohea Loco took the ball as he slid across the ground and called a mark.

A short time later Joseva Tamani was penalised for not supporting his own weight at the break down. NSW Country kicked for touch and on the other side of the field Blacklock went over from the back of the maul after the lineout for his second try. Winger James Kane kicked the conversion to make the score 12 to 5.

Michael Icely spilled the kick off and Fereti Sa’aga was right on the ball and made five metres. Pone Fa’amausili and Semisi Tupou made good runs before Esei Ha’angana got over the line but was held up, which under the NRC rules results in a goal line drop out. Aaron Blacklock was penalised for not rolling away in the tackle. Michael Moloney drilled a kick into the corner for a lineout, although Rising fans would have held their breathe as for a short time it looked like the kick may have been too deep.

The lineout throw by Anaru Rangi overshot the runaway (the lineout in actual fact). Mack Mason gathered the ball for NSW Country and put in a little kick. Ukalele gathered the ball approximately thirty metres out from the Eagles’ line and fired the ball to Justin Marsters in midfield. A short time later Marsters threw a ball where Nigel Ah Wong jumped up and snaffled the ball before running sixty metres to score under the posts. Kane converted to extend the NSW Country lead to 19 – 5 after 16 minutes.

Michael Moloney took advantage of another law variation kicking a 50-22, which resulted in a lineout to Melbourne. Rangi was called for not throwing straight and the wonderful kick from Moloney was to no avail.

Nailati Ukalele gathered a bouncing ball after the Rising decided not catch a high kick and ran 50 metres before flinging the ball inside. Ukalele was unlucky to have been ruled to have lost the ball as he threw the ball back inside.

From a scrum on half way the Eagles spread the ball through the hands of Jake Gordon, Mack Mason and Nigel Ah Wong from the right wing to the left side of the field. Tim Clements put through a grubber kick, which was tidied up by William Lewesi but only five metres out from the Rising defensive try line. The Eagles were penalised for being offside at the next breakdown.

The Rising finally won a lineout but Moloney kicked the ball on the full, after it was taken back into the 22, which resulted in the Eagles having a line out on their attacking 22. The lineout was disrupted by the Rising but Ross Haylett-Petty knocked and NSW Country received a scrum feed.

Jake Gordon went down the blindside from the scrum and passed to Mack Mason who passed back to Gordon who was bundled into touch. Fa’amausili then knocked on for the Rising, but the Eagles couldn’t take advantage of the mistake throwing a forward pass a short time later.

The Eagles destroyed the Rising scrum near the 22 and received a penalty and Kane kicked into the corner, which smelt like a fair chance of a Blacklock hat trick. The Eagles scored from the driving maul but in this case it wasn’t Blacklock it was Connor Vest. Kane couldn’t convert from wide out and the Eagles threatened to run away with the game leading 24 to 5.

The Rising threatened to make a break down the right wing with Anaru Rangi powering away from the Eagles before passing to Lolohea Loco who linked up with his fellow winger Ukalele but unfortunately for the Rising Ukalele put a foot into touch.

In an attempt to hold the Rising up in a maul William Harris was penalised for not releasing a tackle. Moloney found touch fifteen metres out from the Eagles’ line. From the lineout, good runs from Ikapote Tupai, Ukalele, Fa’amausili and Ha’anagana the Rising were breathing on the try line. Then Ross Haylett-Petty picked up the ball and dived over for a much-needed Rising try right on half time. Moloney added the conversion, making the half time score NSW Country 24 Rising 12.

It was a scrappy start to the second half with the Rising penalised for tackling Connor Vest in the air but James Kane did not find touch from the penalty and the Rising found touch just inside the Eagles’ half. From the lineout, Mack Mason threw a wonderful pass to Nigel Ah Wong, who burst through the Rising line before sending Tim Clements away to score. Kane converted from the sideline to wipe out the score the Rising had just on half time.

A brilliant regather from the kick off and strong runs from props Pone Fa’amausili and Matt Gibbon saw the Rising attacking the Eagles’ line when the Eagles were penalised. The Rising opted for a scrum in front of the posts but the Eagles received a short arm penalty.

Ross Haylett-Petty used his go-go gadget arm to steal a ball at the Eagles lineout but the Eagles were able to regain the ball a short time later but were penalised for entering the break down from the side. The Rising gained fifteen metres from a driving maul and received a penalty for Patrick Tafa being offside. Theo Strang made a run toward the line and looked like he may have got his leg to the ground for a tackle but it was ruled as a maul and the Eagles were awarded a five-metre scrum.

The Rising scrum destroyed the Eagles scrum and Tupai picked the ball up at the base of the scrum, couldn’t score but did receive a penalty. The Rising elected for another scrum but couldn’t take advantage with Rangi knocking on a short time later.

The Rising were able to take advantage of a penalty a short time later as Justin Marsters reached out and slammed the ball down despite the efforts of William Harris. Semisi Tupou added the extra to reduce the Eagles lead to 29 to 19 with twenty minutes to go.

Justin Marsters then took advantage of another rule variation kicking a 22-50. Which saw the Rising benefit from a throw into the lineout.

Both teams had chances over the next fifteen minutes and both teams went through phases of giving away penalties in defence. With the referee losing patience with three minutes to go with Patrick Tafa receiving the yellow card for failing to roll away. The Rising failed to find touch and the Eagles kicked a 50-22 (in fact it was close to a 22-22).

There were no scores in the last twenty minutes and the NSW Country Eagles registered their second win 29 to 19. After two losses in a seven round season the Rising’s season is almost run and done.

The Rising were attacking inside the Eagles’ half and Nigel Ah Wong jumped up snatching the ball and running sixty metres to extend the Eagles lead to 19 to 5. The Rising, despite getting the score to 24- 12 at half time never looked like getting any closer than this to the Eagles. The other game changer was the driving maul from the lineout that resulted in three tries.

Michael Icely was dominant at lineout time. Given the fact that the lineout led to three Eagles tries and that Icely was also involved in cleaning up loose balls and even an intercept I select him as the best on the ground. Mack Mason and Nigel Ah Wong were heavily involved when the ball went out to the backline. While Jake Gordon just went about his business with a minimum of fuss.

Rising winger Nailati Ukalele was a clear stand out for this category. He made a number of dynamic runs displaying both speed and strength.