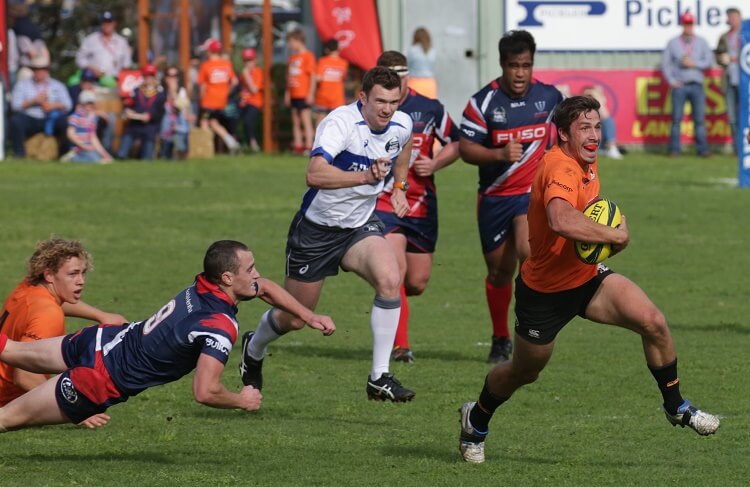 The Eagles have continued their unbeaten run, edging out the Rising 32 – 30.

In an entertaining match, the Eagles dominated on the scoreboard, scoring four tries to one in the first half.  The Rising clawed their way back into the match, keeping the Eagles scoreless in the second half.  However, the Eagles held on in front of a large Tamworth crowd.

The unbeaten Eagles lost Andrew Kellaway to injuries and was replaced by Angus Roberts.  The Rising also made three late changes, the most notable Nic Stirzaker and Sefa Naivalu, did not play.  Tom English, in the absence of Nic, took over as Captain.

The Rising had all the early possession, great field position and had the Eagles undress pressure.  However, the Rising didn’t seem composed when on attack, and couldn’t convert the good field position into points.  To their credit, the scramble defence from the Eagles was good.

Ten minutes down, and it was all Eagles.  They nearly scored twice, only to fumble possession right near the try line.

Eighteen minutes in, and the Eagles scored the opening try.  It took nine phases of solid work, and despite some solid in defence, Tolu Latu managed to find a gap and score.  Deegan converted, and the score was 8 – 0 to the Eagles.

Four minutes later, and the Eagles scored another try.  A good break from Deegan found Roberts out wide, who was pulled up only a few meters from the line.  Figg gathered the loose ball, and ran uncontested to score.  Deegan didn’t miss the conversion, and the score was 8 – 0 to the Eagles.

The Rising were net on the board, with a lovely try to Meehan.  Deep in their own half, Debreczei managed to sneak a ball out to Placid, who steeped his way up field, just falling shore of the line.  Meehan collected a quick ball from the ruck, and he was in under the posts.  Debreczei didn’t miss the kick, and the score was 16 – 8 to the Eagles.

The Eagles hit back with two more tries before half time.  Despite some solid defence, Ned Hanigan managed to find a gap and score.  The next was lovely team effort; a good counter ruck, scooped up by Figg, who found Horowitz, then Gordon out wide for the try.  Deegan converted both tries, and the Eagles were 32 – 8 at the break. 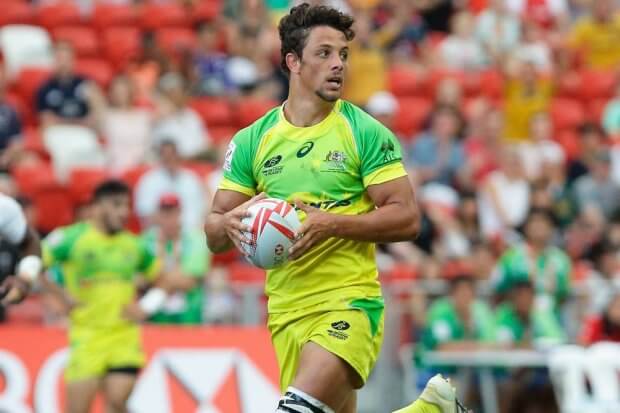 Whatever Zane Hilton said at half time, it has the desired effect.

It only too three minutes for the Rising to score a try.  Tom English put in some hard yards, and found a gap in the Eagles line.  Unable to finish, he passed to Snoweden to score the try.  Debreczei converted, and the score was 32 – 16 to the Eagles.

The Rising started to open things up a bit, making some good breaks and meters.  Their good work was undone by a Yellow Card to Jonah Placid.  A very tough call indeed, considering the ball was thrown at him.

Despite playing a man down, the Rising were playing good football, and making metres deep into Eagles territory.  After a nice-phase build up, Meehan was able to float the ball wide to Silafai-Leaana, who scored in the corner.  Debreczei was unable to convert from out wide, and the score remained at 32 – 22 to the Eagles.

The Eagles went on attack after the restart, and came close on a number of occasions. The Rising, desperate to take the lead, went up a notch in intensity.  Sam Jeffries put his hand up for tackle of the year, with a lovely bell ringer on Fa’ainga.  Despite the good field position, poor handling cost the Eagles dearly.

With five minutes left, the Rising went on attack, with a number of pick and drive raids.  Rob Leota was able to score under the posts, with the TMO confirming the try.  Debreczei converted, and we had a nailbiter on our hands.

With two minutes remaining, the Rising went on attack.  Just when they were setting up for a final raid, they gave away a penalty at the ruck.  The Eagles kicked to touch, and a tight match was over.

The Eagles set up their win in the first half with four great tries.  No team had come back from such a half-time margin, but the Eagles managed to hold off the Rising.   Just.

Sam Figg both won the MOTM and “sweet lids” award for the day.  He was in everything; either he set up tries, scored his own, or played the breakdown pest ole to perfection.

Aside from Sam Figg, Ned Hanigan, Tolu Latu, David Horwitz and Jake Gordon played well for the Eagles.  Jonah Placid look good in patches, and Tom English came alive in the second half.  Alex Toolis played well at flanker, and Sam Jeffries has found a new level of aggression this season.

Perth show spirit as they resist a desperate Rams
NRC 2016 Rnd 3: Team of the Week