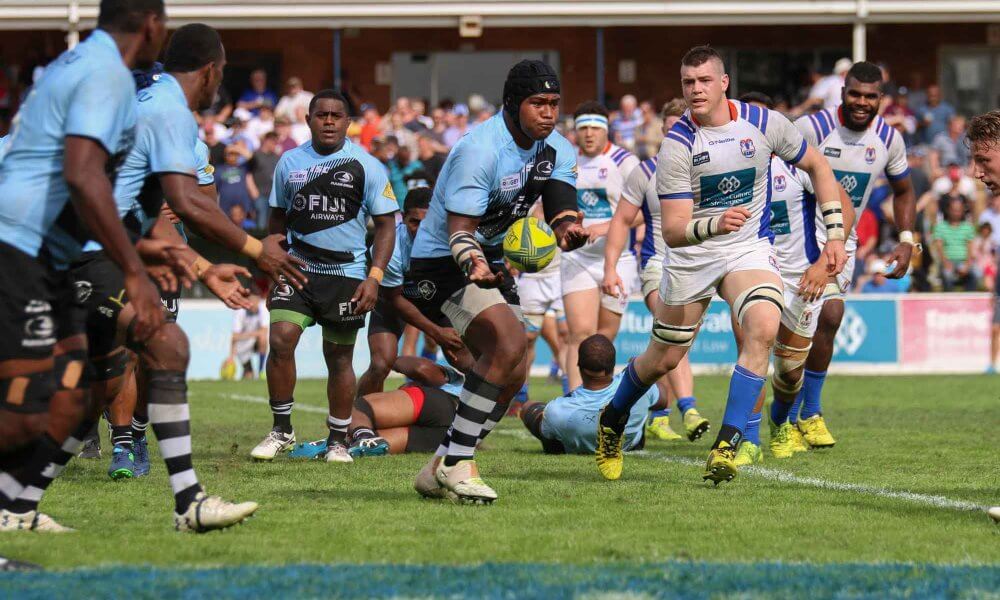 There was movement in rugby clubland,
For the word had passed around,
The Fijian Drua were in town
Here to play the Rams –
In front of a raucous TG Millner crowd.

There was a vibe to this match that was really special. Driving up to TG Millner, the surrounding streets were filled with cars that made it difficult to get a park. Despite my frustrations, I was also elated: the NRC is really coming along this year in terms of crowds! The Rams management had done a wonderful job organising an incredible event with the schools rugby event, with a crowd of close to 4,000 packing in to enjoy one of the most exciting NRC fixtures in recent years. 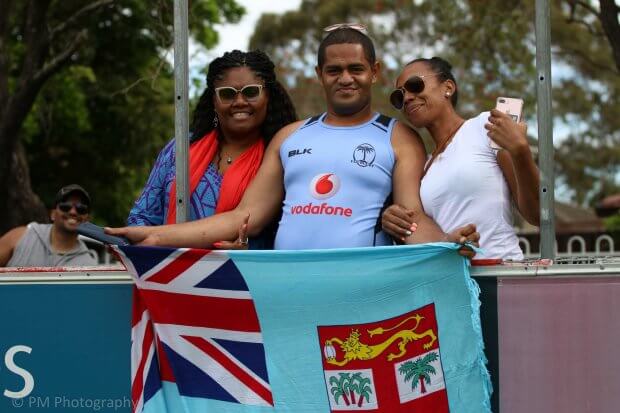 The match was very tight for the first ten minutes, with both sides trading blows and early threatening passages of play. It really set the trend for what was to be the theme of the match. It was the Drua who finally broke the deadlock in the fifteenth minute, when the Drua used some great handling skills to see prop Joeli Veitayaki head over the line. They then followed it up with a penalty to get them out to a 0-10 lead, but in typical NRC fashion, it wouldn’t last long.

Skipper Hugh Roach found the chalk off the back of some outstanding work by the Rams forward pack to get the home side on the board, before Cam Bailey was on the receiving end of a beautiful piece of backline work three minutes later to have the Rams ahead by four.  But just when the Rams looked to be pulling ahead, a well utilised penalty by the Drua saw skipper John Stewart return fire and put the Drua back in front.

The Drua extended their lead even further when a mistake by the Rams saw an outstanding long range counterattacking effort by Apete Daveta to have the away side up by 10 with minutes left on the clock. But it would be the Rams who had the last laugh in the first half, with Ben Cotton coming up trumps to have the Rams behind by three at the break. 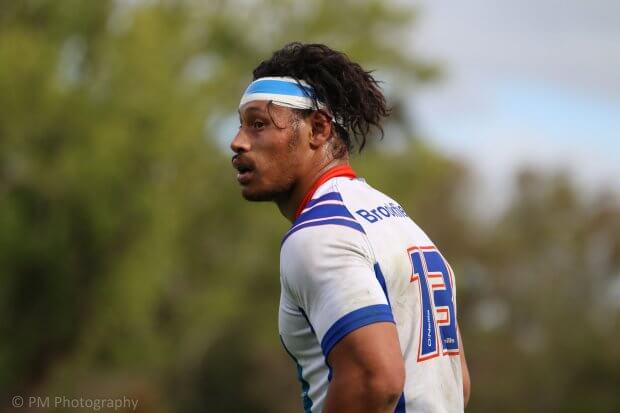 The Rams started off the second half in much the same way as they finished the first half, with Hugh Roach combining with the Rams forward pack to put Stu Dunbar away in the corner. Suddenly, the Rams were back in front and looking mighty dangerous.

It took another ten minutes for the Drua to compose themselves, but got back in front when Stewart combined well to to put Apete Daveta over the line for his second try and to put the Drua back in front. But, once again, the Rams refused to lie down. Five minutes later, Denis Piligateau pinned the ears back to take several Drua players over the line and put the Rams on equal points, 31-31. The match was on a knife-edge. Anyone could win.

It was fair to say that whoever could break this deadlock would win the match. At the 60th minute, it was once again the mastery work of skipper Stewart who found fullback Apisalome Waqtatabu to put the Drua in front. This proved to be a fatal blow for the Rams outfit. They doggedly defended but after Eroni Sau crossed again just before the 70th minute, they simply ran out of steam.

The Drua grabbed two more tries in the final ten minutes to Frank Lomani and Kitione Taliga tying the Rams in knots with sublime counter attack. In the end, the winning margin of more than twenty didn’t show the closeness of the affair, but the sound of the roaring crowd at the final whistle proved how damn entertaining this match was. It’s 12 at night writing this and I’m still on a high from this match. Seriously, go watch the replay. 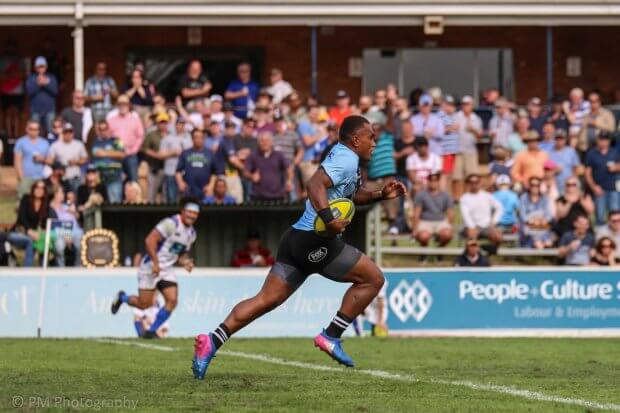 Th Drua running away with the Horan-Little shield.

Credit to the Rams. They turned up to play and put on a solid performance, particularly in the forward pack. For the vast majority of the match they were in it, and on multiple occasions looked to have had the upper hand. In the end they simply were ground out by solid defence and lightening counter-attack. But, even though the team lost, I’m sure many in the stands who were watching will be be back to see the Rams again. It was a wonderful celebration of rugby and it was fantastic to see a big crowd turn up for it! They will look for a quick turnaround when they are at home against next week against the high flying Queensland Country.

But the Drua more than earnt their stripes today. In the final minutes, there were bodies everywhere, which really showed how intense this match was. They threw everything into this game, and were rewarded with a well-deserved win against a good opposition. It is hard not to argue against their inclusion in the NRC after days like today. They got the crowd into it with outstanding running rugby The win puts them back on track with a very slender lead at the top of the table, and will enjoy a well-earnt bye next week. 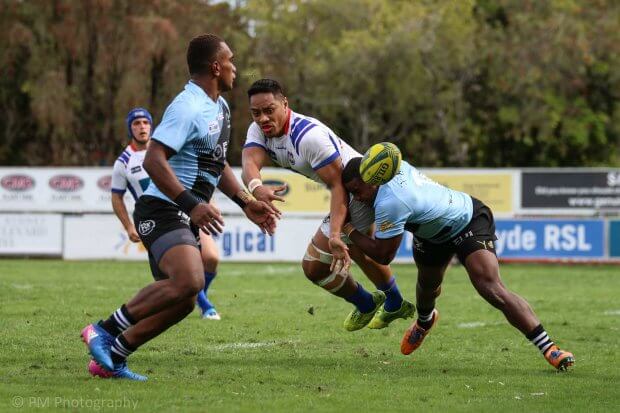 Both sides were on equal standings until Apisalome Waqtatabu’s outstanding try in the 60th minute to break the 31-31 deadlock. This proved to be the straw that broke the Rams back.

It was a match where the skippers led from the front, and while Hugh Roach had a great performance in the forward pack for the Rams, it has to go to John Stewart. He was electric in the backline, and was responsible for many of the Drua’s tries, while grabbing a meat pie of his own.

Denis Piligateau has been on fire this NRC season, and while he was on the losing side for the Rams, he was absolutely outstanding in giving the Rams backline some go forward. Albert Tuisue was just as dangerous at Number 8 for the home side, while Stu Dunbar filled well for  the massive shoes of Taqele Naiyaravoro, who was unfortunately unable to play this week to a family funeral in Fiji. 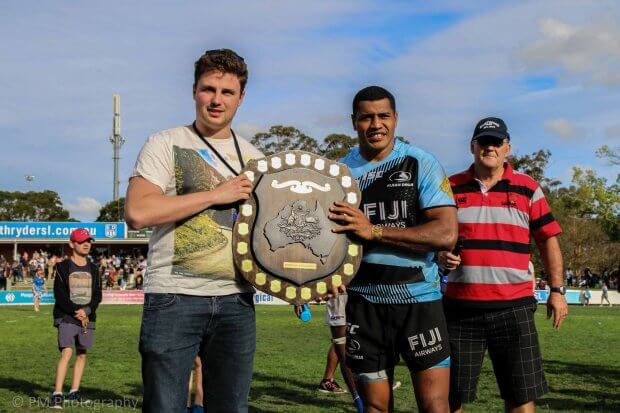