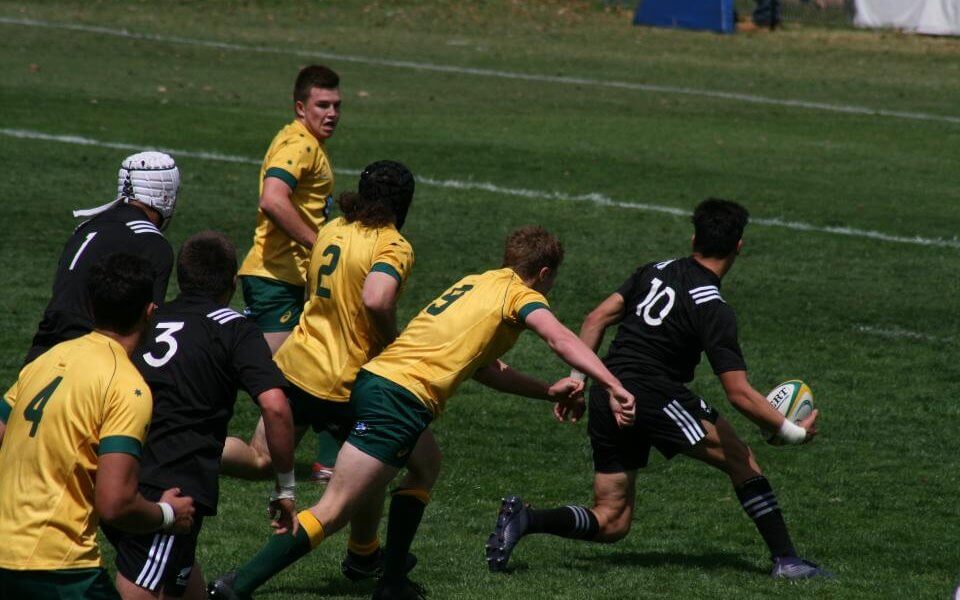 New Zealand Schools proved too good for Australian Schools, winning 34 to 11, while Australian Barbarians beat Fijian Schools 21 – 20 in a thriller.

The matches wrapped up a highly entertaining Tri-Nations series, which the lads and their families and friends will cherish forever. The best side was clearly the ‘baby-blacks’ who just seemed to play with more time and space than anyone else and displayed classic Kiwi support play and counter-attack.

New Zealand Schools were first to score and from that point never really looked like losing.

While Australian Schools gave it their all, the Kiwis stepped on the gas in the final 20 minutes to win six tries to one.

First half
A stirring rendition of the haka reminded anyone in any doubt that our boys were about to face a significant challenge.

And from the outset it was clear the 2017 cohort sent from across the ditch were here to continue the winning tradition.

While Australia were first to get into a scoring position, the initial five-pointer was scored by Jeriah Mua (NZ 7), a few phases after the first of many barnstorming runs by Leicester Faingaanuku (11).

Although the match was still quite young, Australia were finding it tough breaching the Kiwi defence and when a long range penalty was awarded, Will Harrison (10 and captain) opted for the shot which sailed just to the left.

It took over 10 minutes for the first scrum and Australia found themselves under immense pressure.

Shortly after, from a scrum close to their own line, Australia coughed up possession and simple hands found Tupou Vaa’i (5) who crashed over from close range. 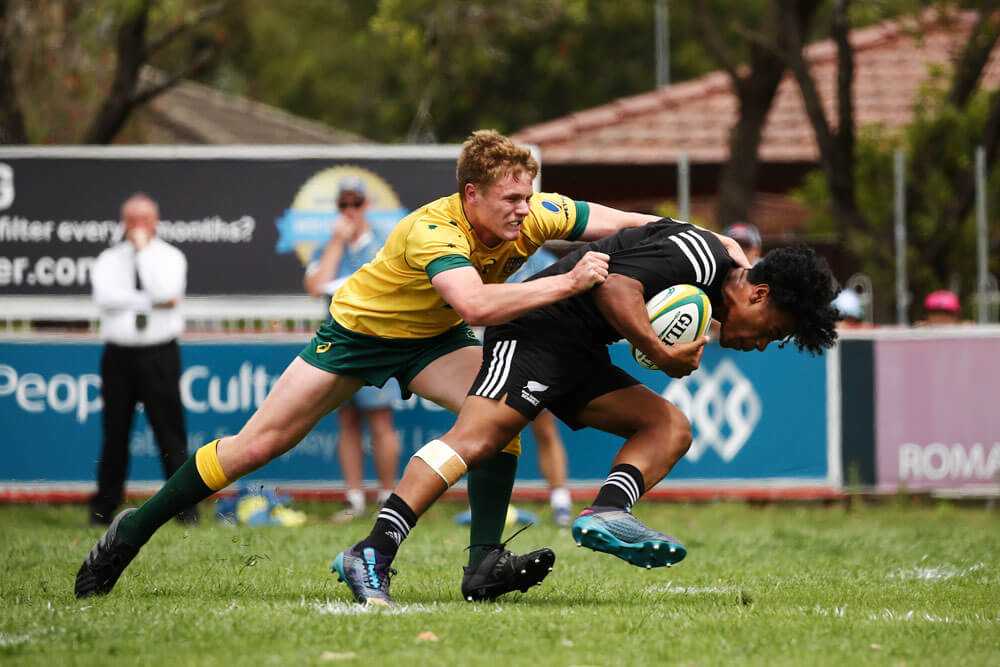 After stringing together some promising attack, Australia was awarded another penalty within kicking distance.

In a clear sign of respect for the Kiwis’ defence, Harrison pointed to the sticks and the three points were taken.

For the remainder of the half, Australia looked good in patches but were let down by their execution, particularly in the midfield and some 50-50 calls didn’t go their way.

Charlie Rorke (6) and Tom Kibble (20 and replacement openside) were really getting stuck in. But the best the local lads could manage was another Will Harrison penalty on the stroke of half-time. 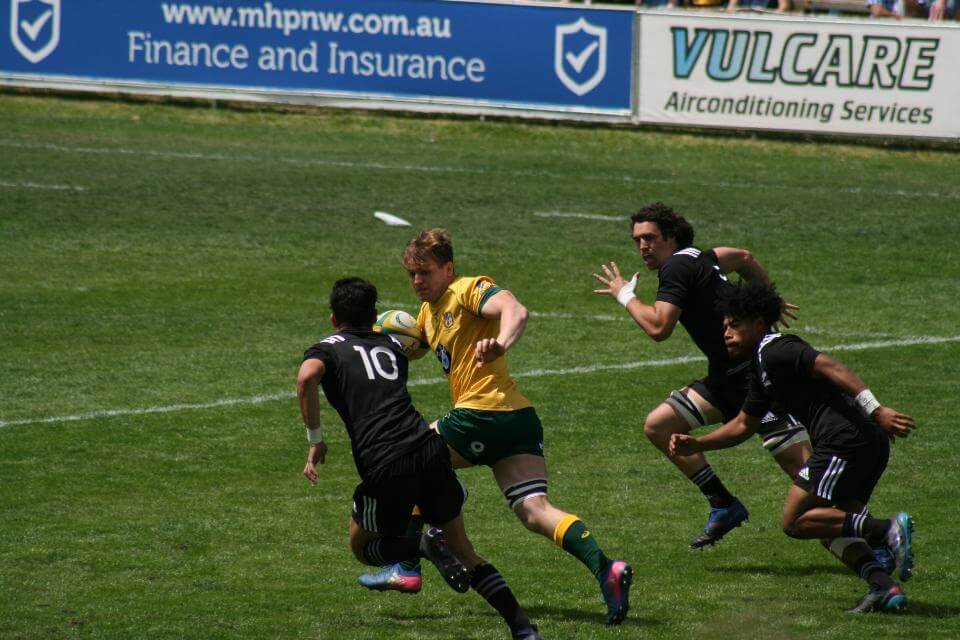 Second half
New Zealand made some uncharacteristic errors straight after the break, but it didn’t take long for them to score again.

Spilt ball by the Australian midfield was swooped on by Etene Nanai (15) four minutes in for a try against the run of play, which was converted. 17 – 6 to NZ.

Two further promising Kiwi raids were stopped by some desperate Australian defence, especially from Albert Hopoate (14) and a knock-on over the line by Nanai.

More dropped ball by the Australians made it hard to build any sustainable pressure. But eventually, they crossed for their first and only five-pointer.

Darcy Breen (3) finished off an encouraging passage of play, started by a strong run by Kibble.

With the gap now narrowed to only 6 points, confidence in the Australian camp was on the rise.

After running it from their own in-goal, Hopoate set sail for the best Australian break of the day, only to be pulled down near half-way. 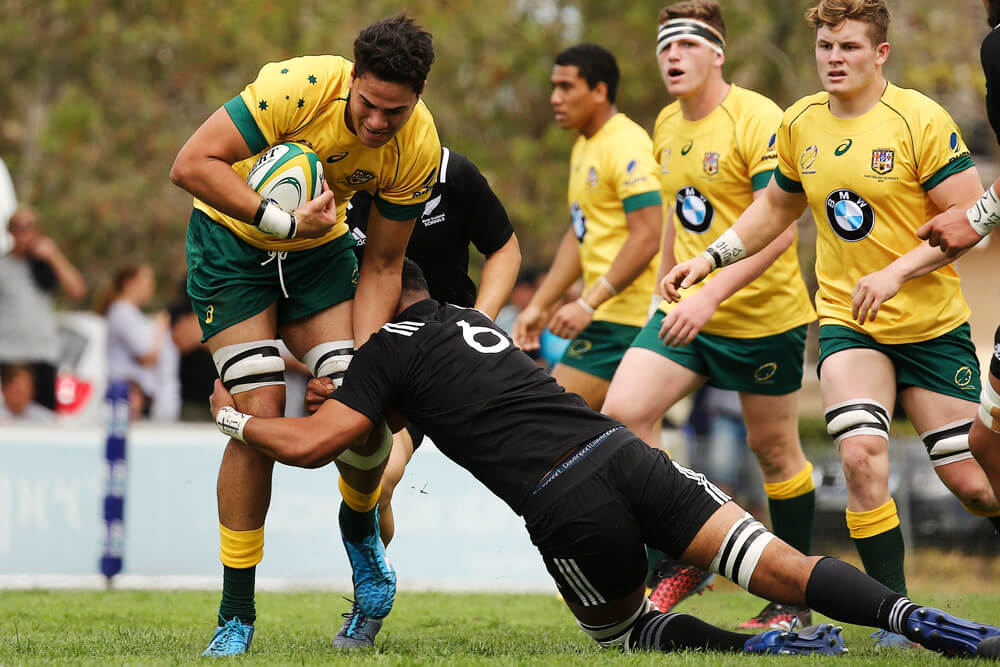 From the next play, Kibble was given a 10-minute rest for a high shot on Faingaanuku.

A man down, the Australian defence rallied, with Hopoate cutting off a near certain Kiwi try.

But after sustained pressure, Faingaannuku scored close to the ruck to take the score to 24 – 11 after the conversion was successful.

The Australians were now tiring from a titanic tussle and the Kiwis started making easy yards from second and third phase possession.

Two late tries to NZ Schools stretched the lead and final score to 34 – 11.

The first by Isaiah Punivai (13) and the second a long range effort from counter-attack, finished off by replacement Lincoln McClutchie (22).

The Australian Barbars were desperately lucky to defeat a very entertaining and deserving Fiji, 21 – 20.

Having been given a rugby lesson last week by the Kiwis, the Barbars were never going to take the Fijians lightly, and if it were not for the sake of an errant kicking tee, Fiji may well have deservedly won this encounter. 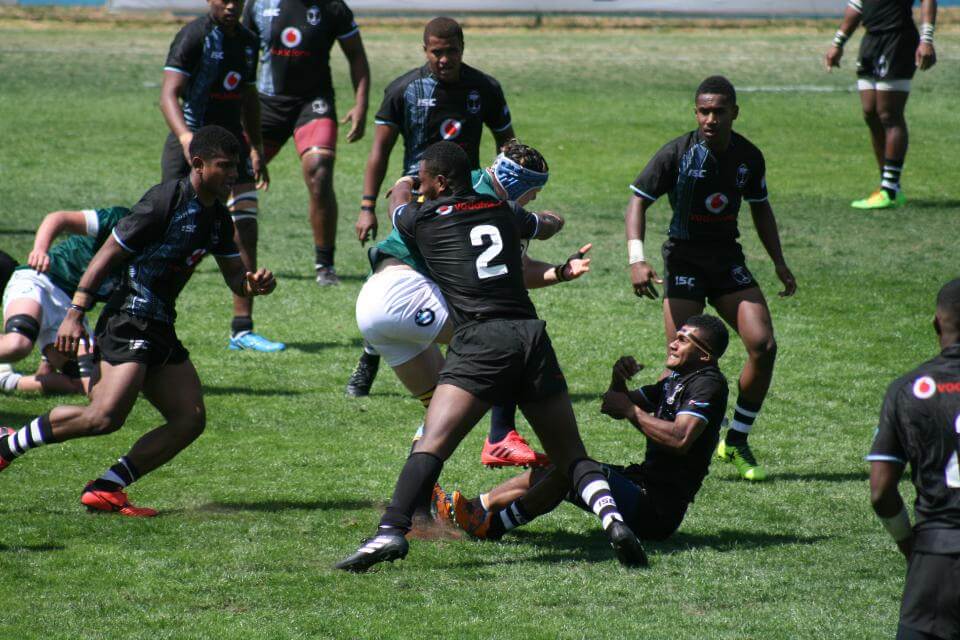 First half
The opening stanza was not good for the Fijians, as over eager defence saw the Barbars take easy metres via penalties.

With the third penalty, BarBars 10 Campbell Parata accepted the three points and Australia was in front three-nil.

The Fijians were here to play, and from the restart they started to throw the ball around and break tackles.

A strong lineout win by Tuwai (4) 15 metres out had Bolayara (9) link nicely with Kunabuli (3) who crashed over for the first try of the match.

Despite the relatively easy spot for conversion, an absent kicking tee meant a drop kick was taken which went wide. Those two points would have been invaluable at the end of the game.

Despite the setback, Fiji just got on with it and a great series of plays linking Kunabuli, Vulakauvaki (1) and Bolayara, resulted in big Tuwai in for Fiji. Again the conversion (with tee) went wide.

Fiji was up 10 – 3, having scored two tries and were looking good. 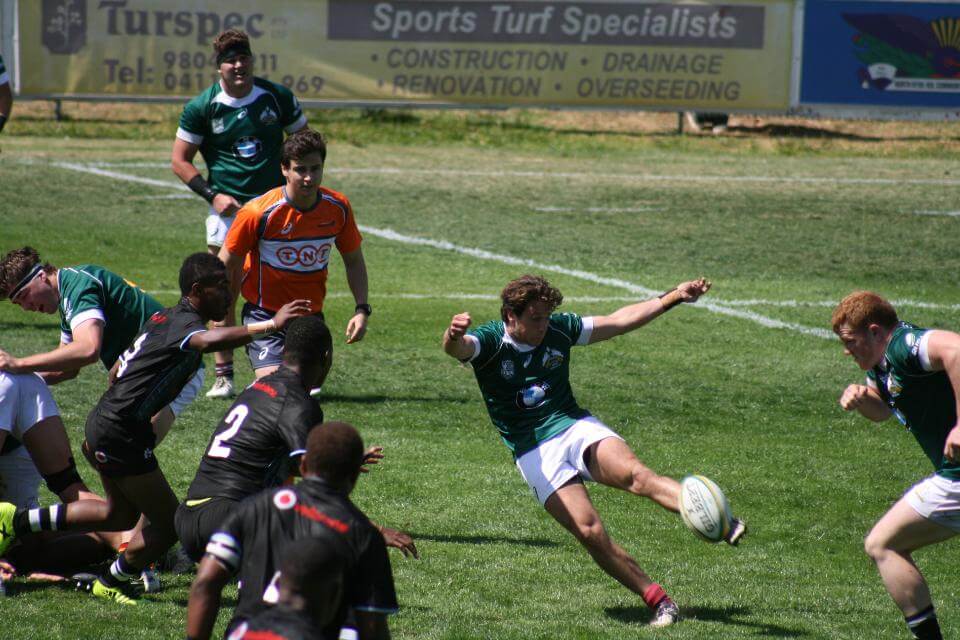 The Aussies needed to front up and the pigs took the Fijians on in the scrum and were very unlucky not to get the rub of the green from the refs.

Some great work by replacement loose forward Cullen Ngamanu at the breakdown, gave clean ball to half Dylan Dowling, who spotted a yawning gap down the blind and promptly scooted 40 metres to score untouched. 10 – 8 Fiji in front.

With Tuwai leading the charge, the Fijian lads bombed several good scoring chances over the next 10 minutes through over-exuberance rather than solid defence by the Barbars.

The Barbars needed the ball, and some strong lead up work by Parata, Will Goddard (12), Apenisa Driti (1) and Egan Sigs (3), gave the Aussies good field position, had Brodie MacAskill (6) make a nice bust through some average Fijian tackles to score a good try. Extras added. 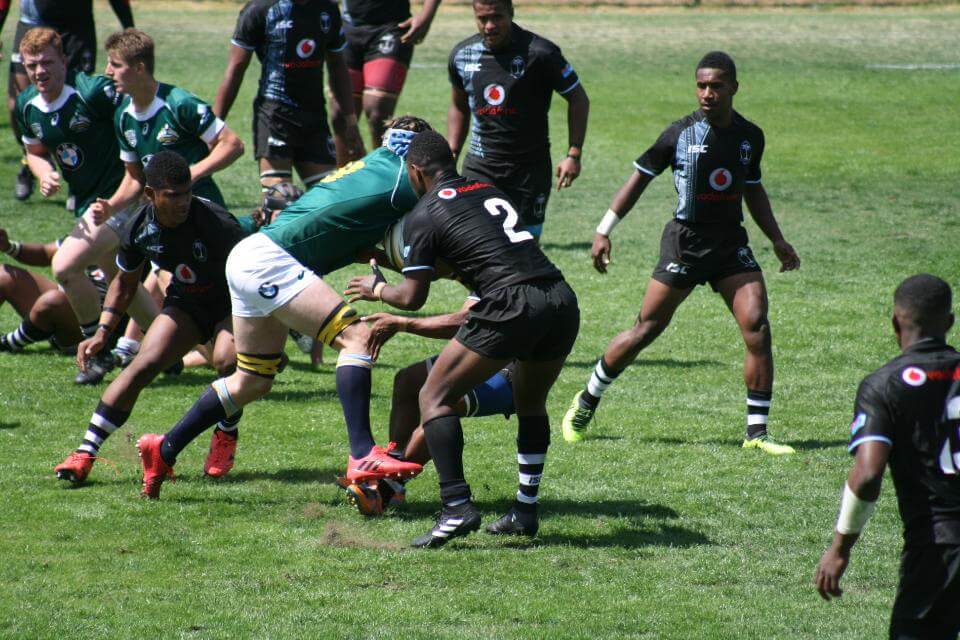 Second half
The second half did not start well for the Barbars when a very dominant tackle by Luca Moretti (8) was rewarded with an extra 10 minutes rest by the ref.

Fiji brought on four subs and the Barbars also bought on Lachlan Osbourne (19) who had a cracking game last week.

A good kick by Parata and an even better chase tackle and repossess by Viliami Lea (14), was rewarded with a penalty for Australia, providing a nice but not comfortable 18 – 10 lead.

With all the subs on, Fiji got on the front foot and started stringing the phases together with some very entertaining rugby.

Passes stuck, albeit unconventional ones and metres were swallowed up.

Australia’s defence was being stretched and eventually it was that man Tuwai who crashed over and with the extras Fiji were just a point down. 18 – 17 to the BarBars.

With five minutes on the clock, both sides played for territory, but it was the Fijian lads who seemingly came up trumps with a very kickable penalty with two minutes to go.
Leading 20 – 18, the Fijian boys just needed to do the Kiwi thing and keep the ball in hand and run down the clock for a deserved win.

Fortune was not on their side and a penalty with time almost up to Australia in range of the posts had Parata slot the final three to snatch victory 21 – 20 from the Fijians. 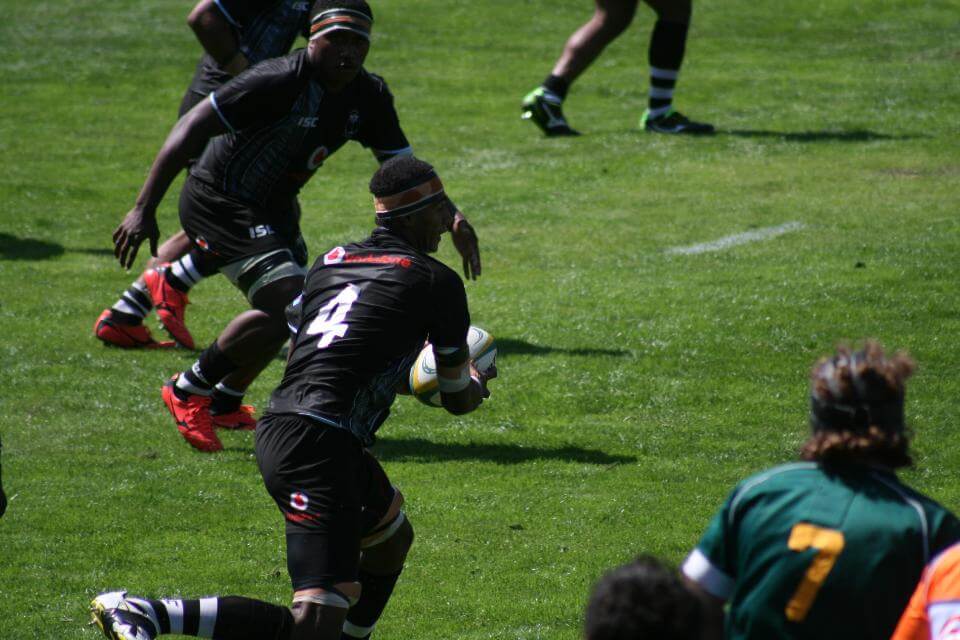