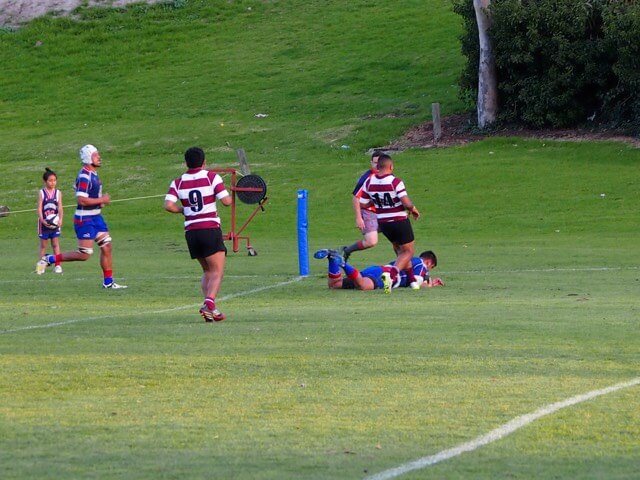 Thanks to a good first half display, Footscray withstood an Endeavour Hills’ comeback to keep pace with the top flyers.

Entertaining game at Henry Turner Reserve, where the Footscray Bulldogs square off against the Endeavour Hills Eagles in perfect conditions.  Both teams were, as all Dewar Shield’s teams, without the Super Rugby assigned players, and had to rely only on amateurs.

In a game of two halves, Footscray looked settled for an easy win after scoring four tries in a solid first half display.  Endeavour Hills was able to turn the table around in the second half and give the Bulldogs a good run for their money.  In the end the Bulldogs were able to hand on and celebrate a hard fought win.

Both teams scored tries early in the game; the Bulldogs after the first two minutes, and the Eagles soon after.  First to go over the chalk for the Bulldogs was right winger Watson Latu, who ended a good combinations between the backs.

The Eagles then confused the Bulldogs by swapping positions between Melbourne Rising Junior Paila and Mason Van Duin, alternating at scum half and right wing.  The confusion helped the Eagles score try, thanks to outside centre Aian Faalavaau.  With a successful Andy Brown conversion, the Eagles hit the front for the first (and only) time in the match. 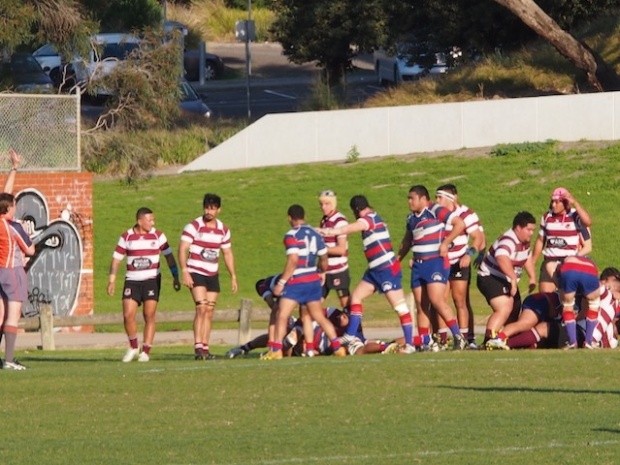 The Bulldogs kept running the ball and soon were rewarded with another Try.  Lock Frank Amtuanai was able to score form the back of a maul.
Almost immediately after the restart, Bulldogs fullback Junior Moananu scored to extend the Bulldogs’ lead.   Scrum half Yamada went over the line for the bonus point try before the end of the half.

Yamada congratulated by teammates after scoring 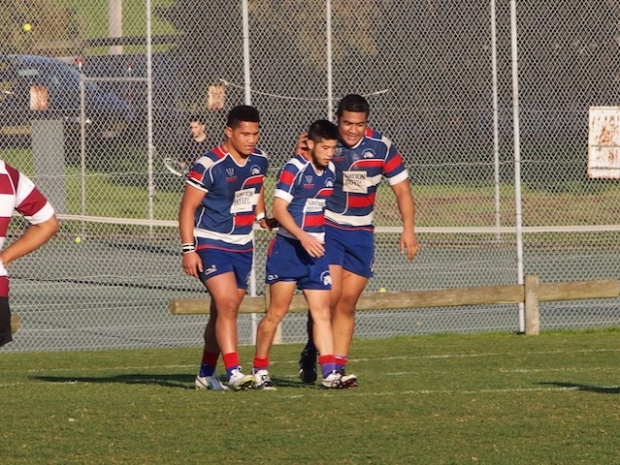 The Bulldog’s midfield combination of Isaiah Leota and Keisuke Yamada worked perfectly throughout the half, and were well supported by the usual powerful forwards.

At the half time break Footscray led Endeavour Hills  22 – 7.

The second half was a completely different display from the Eagles, thanks to the inclusion of powerful back rower Potu Leavasa.  He injected some much-needed physicality to the Eagles forwards and match the Bulldogs at the breakdown.

Leavasa was the first to score in the second half, adding another five points to the Eagles score.  When Footscray’s Ikuna Takuafu was sin binned for repeated infringements, Reni Molimau scored a Try to bring the Eagles within one point of the Bulldogs.

Molimau over the line for the Hills 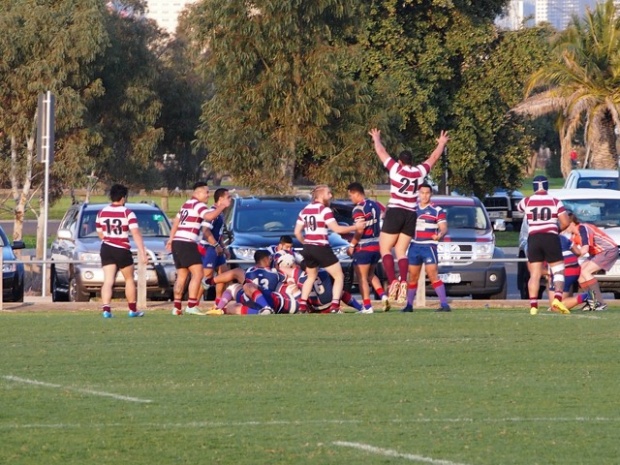 The Bulldogs showed composure to hold on with a man down, with the forward pack dominating the scrum battle.  The Bulldogs were able to earn a scrum penalty, with Leota slotting the extra three points.  Score 21 -21 to the Bulldogs.

At the end of the sin bin period the Bulldogs scored, with number eight Peter Tuiavii crossing the line (title picture).  The Eagles were quick to go on attack and were rewarded when  Faalavaau scored his second Try of the day.

What followed was a series of sterile phases from the visitors in the Bulldogs 22, until the the final whistle blew.

A very good game to watch, however both teams have to reflect on their change of attitude between first and second half.  Footscray must get better in closing off games that looked already gone their way.  Endeavour Hills must start the next game with the same fighting spirit they showed in the second half.  The Eagles outscored their opponents and were a try away to a deserved comeback win.

In the other games of the Dewar Shield Melbourne topped title holders Harlequin and Melbourne Uni thrashed Southern Districts.  Moorabbin scored a narrow win against Power House to keep the chase on Footscray.  Ladder’s leaders Box Hill enjoyed the bye.