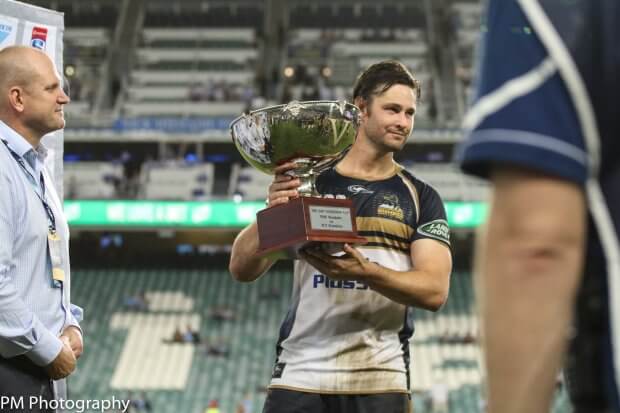 Two of the big teams in Australian rugby met in turbulent times with added impetus – the inaugural Vickerman Cup in support of mental health and in memory of a player highly regarded by the Waratahs and the Brumbies. RIP Dan Vickerman.

The wet ground conditions led to some dire rugby as both sides turned over the ball like millionaires.  In the end it was the Brumbies who seized their chances best and put the Waratahs away, easily at the end. 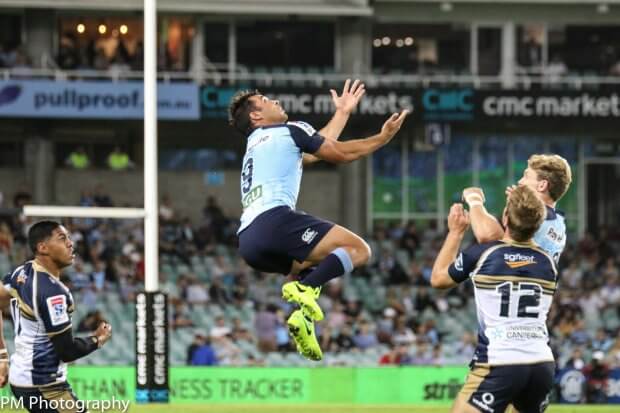 There are a few nice passages of play early but spillage puts paid to any results.

Constant Waratah possession ultimately pushes the defence at the try line. The Brumbies test the referee’s patience and Fardy gets an early yellow card for collapsing a maul. Waratahs continue to drive, then a series of pick-and-go’s has Robertson scoring a front rower’s try near the posts.

The Brumbies can’t play territory without the pill, and their first phase, or exit kicks, are not achieving what they are after.  Waratahs getting over the advantage line routinely but good Brumbies’ defence and poor Tah’s handling stops try-scoring chances. 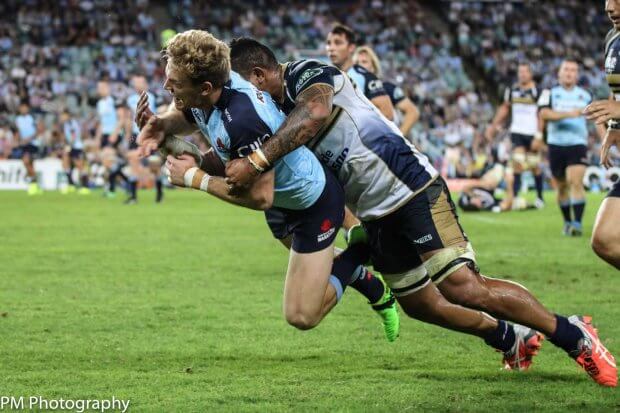 But eventually the Brumbies start winning the kicking and retaining-the-ball contests, and using the maul better.

In the 26th minute the Brumbies set up a maul from a 5-metre line out throw to the front. Not ideal for a maul setup and Big Will Skelton goes through the middle forcing Powell to play it. Even with Hooper standing off the maul, there is not enough defence as Speight punches up. The next phase has the defence looser and no-one will halt Kuridrani this close to the line. Try under the posts.

Mostly it’s fumble and slow ball between the 22s. Does it all sound like a touch of tedium? If so I’m getting close to reality. 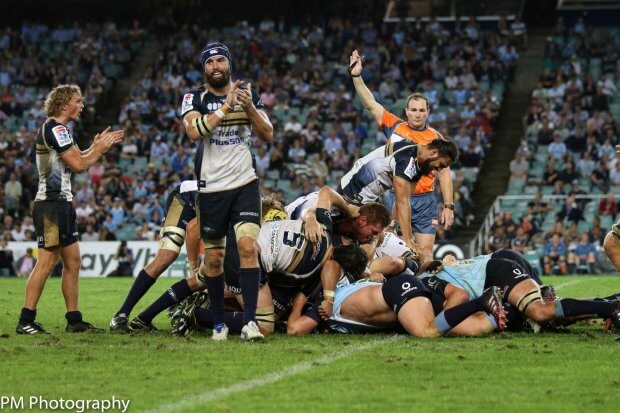 Another scrum penalty for the Brumbies.

Larkham stated earlier that he’s expecting the Waratahs to tire in the second half on their return from an African tour.

Will Skelton does not return. As an impact player, it’s hard to imagine why you wouldn’t give him another ten minutes after the break. Which is what happens with Phipps – replaced by Jake Gordon. Brumbies swap Arnold for Enever at about the same time. It’s a tiring, heavy game where the reserve bench is used by both teams quite early.

The game style continues. Both teams looking for territory – the Brumbies are better at it. There are plenty of scrums and mauls. The forwards earned their keep in this game.

The newcomers take a few minutes to settle in to give us the best 10 minutes of the game. 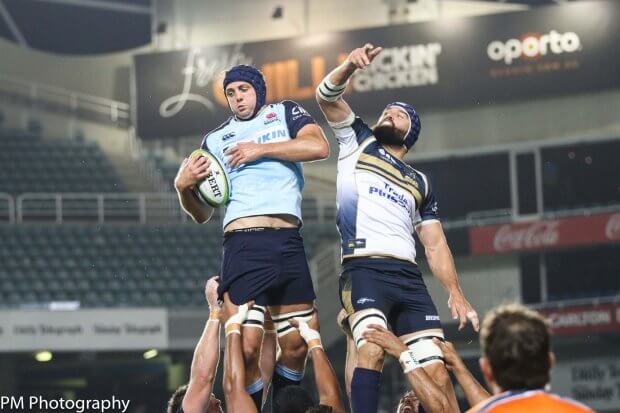 A Waratahs’ scrum inside their 22 is a success but is failed by infringement when Jed Holloway holds back Scott Fardy from exiting the scrum. Completely unnecessary and provides possession to the Brumbies in excellent position.

Kick to corner! Little confidence shown in Hawera’s goal kicking here. The throw is to Carter – the maul set up might prefer a deeper jumper but this works. Maul-wrecker Skelton is off the field, of course. Try to reserve hooker Robbie Abel.

Hawera converts from more-or-less where the penalty was – it’s all smiles at the Brumbies.

From the re-start Powell box kicks down the tram tracks; nobody home and Speight is charging. It’s wonderful when a half box kick is done with cunning, vision and strategy. Speight gets the golden bounce and kicks it over Hegarty, and it’s a race to collect it .  Try! That’s two tries in three minutes. Hawera converts – there is nothing wrong with his goal-kicking after all. 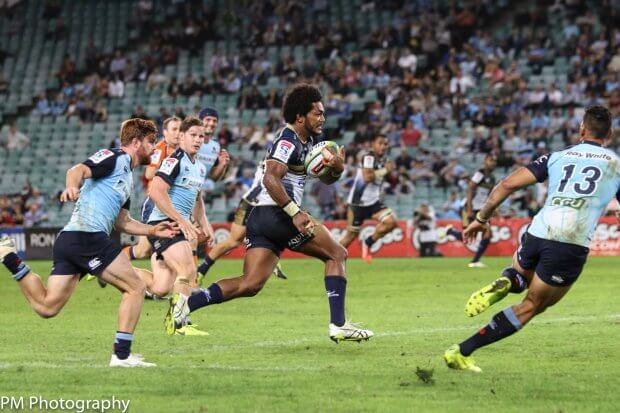 Speight on his way to his first try of the evening.

It’s a repeat of the last re-start but the Powell box kick isn’t quite as accurate, just a touch too deep. Kellaway gathers it easily and puts the foot down for easy distance getting close to the 22. Simple first phase through the hands and it’s the Waratahs. Try to Jake Gordon!  Brumbies 21-12 and 17 minutes still left.

A territory battle ensues with the Brumbies doing it better.

Scrums swallow time – the Brumbies set piece finally taking ascendancy. The Brumbies take a couple of penalties. One from the half way line. Hawera kicks to just outside the 22.

I’m not the only one predicting the Brumbies to be backing their set piece here. Blake Enever takes the throw and the maul is set. The Waratahs fail to sack the line out. The maul makes 15m until the Waratahs start pushing back forcing Powell to play it. One pass to Speight, a slip by a defender, and two tacklers not used, and Speight is in for his second.  Try! 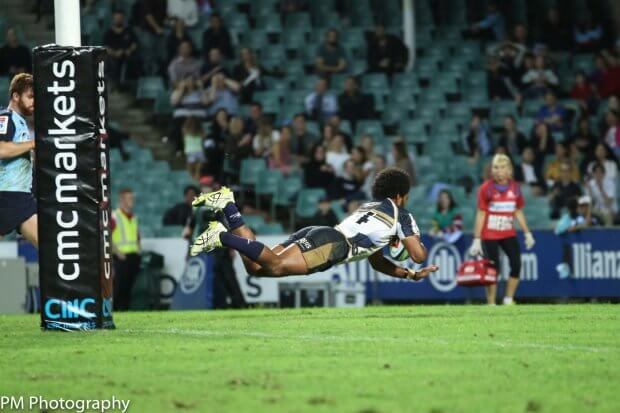 Henry Speight dives over for his second try.

Waratahs
Perhaps Larkham was right and the African tour left the Waratahs without energy. Perhaps the injuries forced Daryl Gibson’s hand when it came to selection. Certainly, the absence of Bernard Foley is impacting the team.

Whatever caused the selections, it’s hard not to reach the conclusion that the lighter loose forward experiment failed against the heavier loose forwards of the Brumbies – in the wet at any rate.

Skelton is having an impact, but it probably needs to be more than one half of rugby. Latu, Mumm, Simone, Folau and Kellaway had flashes.

It could be a long year for Waratah fans.

Brumbies
I’ve been somewhat sceptical of Larkham’s early entry to coaching at the Wallabies. This game however was a win by Larkham. Selections, replacements and game strategy were spot on for the conditions.

The team was a little slow in getting the game plan into place, but once there, it was generally one-way traffic.

Speight and Kuridrani have a look about them that says “Regular Wallaby”.

Carter, Arnold and Enever were a rock platform for the set piece. Fardy is reaching form again – unfortunately including his enthusiasm for the sin bin. 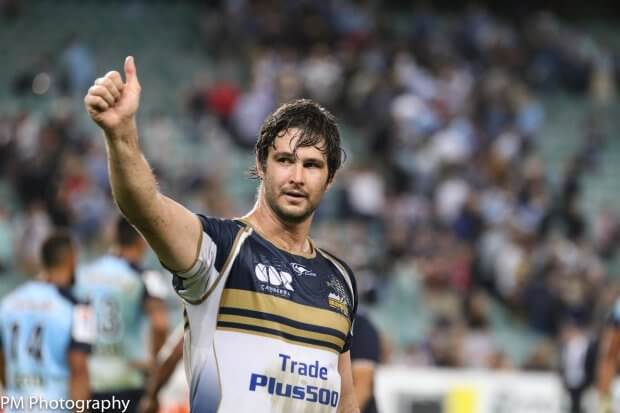 The Waratahs simply did not make enough of the first 20 minutes especially against 14 men. The game turned with Speight’s first try (and the Brumbies second).

Henry Speight can’t be missed with two tries and great input around the field. Honourable mentions to Aidan Toua and Dean Mumm.

Outside of the predictable, let’s watch closely: Joe Powell and Aiden Toua. Will Skelton is the same mix of frustration, good and bad, but let’s keep our eye on him too.

Rebels Valiant Effort Against The Chiefs
Lions v Reds – Was it worth it?