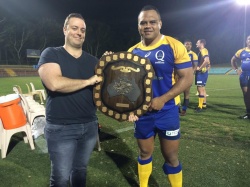 Brisbane City came to sydney with their A team, their A game, and the confidence to put the Horan Little shield on the line against an injury plagued yet much improved Sydney Stars team.

City’s Super Rugby payers all stood out early, with Neville, Kerevi and Hunt all making meters at will. The Stars put some big hits on but it was only 5 minutes into the match when Karmichael exploited an overlap off a stolen lineout and turned the ball inside to Laloifi for the first try of the game. 3 minutes later it was Hunt again making the last pass, this time to Chris Kuridrani on the right hand wing.

The Stars were mixing a lack of ball with a lack of discipline to give City some easy territory. At 14 minutes Hunt had a couple of touches in a nice backline move that ended with Laloifi in for his second. With the conversion it was 21 nil. The Stars finally got some good ball but they were turned over and Samu Kerevi made a big break down the touch line. Frisby almost put Scott Higginbotham through, but he was dragged down by some desperate Stars defence. However City had too many men on the right and Hunt went in untouched.

It was turning into opposed kick off practice for the Stars as 2 minutes later Hunt made a midfeild break. Frisby sized up the lack of a sweeper and kicked into the corner. Laloifi showed why his nickname is the Prince of Pace, beating everyone to the ball for his 3rd try of the night.

Soon after Brisbane set up a scrum 5 m out and tried to exert some dominance on the weakened stars pack. The Stars managed a good shove, but the ball spilled out the sized for Higginbotham to pounce and score next to the posts. The only blight on City’s half of football was when Karmichael Hunt limped off. Things never got better for the Stars, as referee Will Houston lost patience with the Stars not rolling away at the ruck and gave Toleofoa an early rest. At half time the score was 45-0. 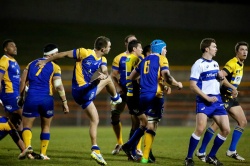 The second half was comparatively quiet. City had the Stars pinned in their 22 but the Stars defended well until in the 50th minute Henry Taefu made a break and offloaded to Cadeyrn Neville who was held up. From the ensuing scrum, City played a simple numbers game to put Laloifi in for his 4th try. The Stars continued to defend well and made the best of their limited possession, but in the 60th minute they replaced halfback Jake Gordon and lock Matt Philip, who had been the only Stars players to look threatening.

In the 70th minute Brisbane City again showed the value of a strong scrum, earning a penalty and the chance to set up a lineout in good attacking position. From the maul Waita Setu dived over for City’s 8th try. Despite a late surge from the Stars, Brisbane City held strong to keep a clean sheet.

There really was none: City dominated from start to finish

While Kerevi threatened all game and Hunt set the platform for the big lead, Man of the Match goes to 4 try finisher Junior Laloifi

Henry Taefu troubled the Stars midfield with the ball in hand and put in some big hits in defence. He’s the sort of skilled ball runner that will be in high demand for Super Rugby teams. For the Stars, Jake Gordon continues to impress with fast service and great vision.

not to be taken too seriously