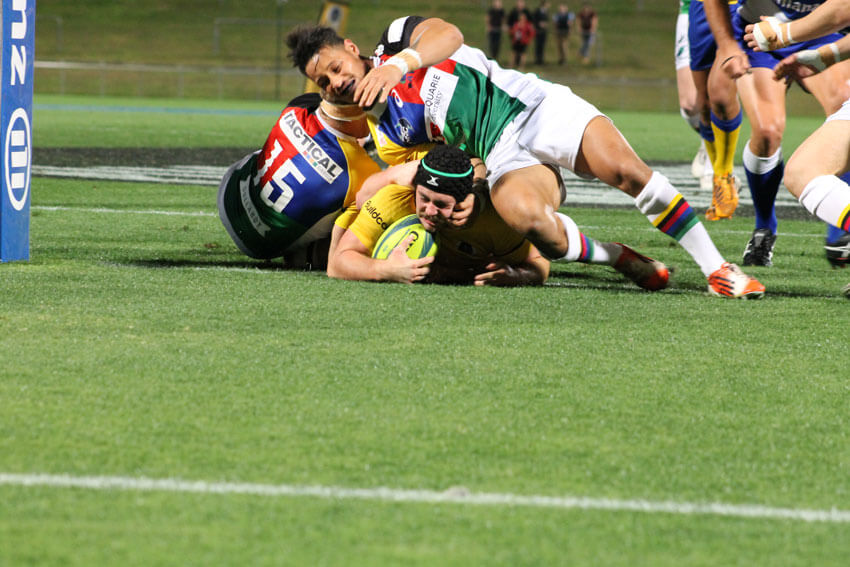 Brisbane City are on a roll with three wins from three, and are defending the Horan Little Shield at home for the first time, against the North Harbour Rays.  The Rays have lost some key players this week (Ward, Johnson and Gower) so it is a great opportunity for some of the club players to take a step up.  It will be a tough ask for the Brisbane team, who played the most physically intense game of their season so far against Queensland Country only four days ago.

The Brisbane City pack is the best in the competition (and should be with Nick Stiles as coach) but with Luke Holmes and Boyd Killingworth continuing to impress for the Rays it was going to be an interesting hit up between the two – City’s front row is huge with Matt Mafi starting for the first time this season.

The first try of the night came on the back of a concerted effort by City on the Rays’ tryline and some scrambling defense by the Rays which forced a scrum 5m out.  The Rays angled in and the Hoff awarded a penalty try, converted by Jake McIntyre.   The pack weight difference certainly came into play here and in future scenarios – the raw talent and doggedness of the Rays forwards was contained to some extent by the sheer size of the Brisbane City pack.

It wasn’t long before City had their second try on the board following some brilliant running by Higginbotham and Gill.  Higgers broke through the Rays defensive line with comparative ease to gain 30m before finding Liam Gill who offloaded to Frisby who did well to flick it back to Gill whose momentum saw him crash over.  This was some great play by City and the Rays had no response – I know I am a biased Queenslander, but bugger me having three solid 7s at Wallabies level means it was always going to be a tough call to exclude Gill with play like this and his ability to force a turnover and be that little/big niggle.

Mika Tela, the hero from the Souths premiership winning team was over in the 18th minute thanks to some great moments from Karmichael Hunt.  McIntyre missed the conversion (not the last one he would miss tonight) and these uncharacteristic misses put City under a reasonable amount of pressure at some points in the match.  City need to tighten up their kicking looking at Round 3 and Round 4 missed conversions – as the NRC matures and teams focus more on defense to try and contain the massive tryfests that were the signature of last year, missed conversions will become increasingly important.

The Hoff wasn’t copping any bollocks from the teams and showed Pili-Gaitau the yellow – I have watched it again, and I get it was foul play but I don’t see the yellow. 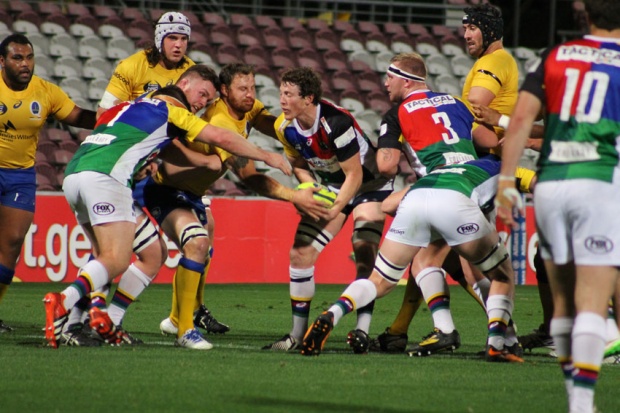 The Rays built up some possession on the back of Killingworth stripping the ball from Frisby.  Josh Holmes scored a fabulous solo try for the North Harbour Rays with Pili-Gaitau still off the field to get first points on the board for them.   The matchups between Killingworth/Gill and Frisby/Josh Holmes were great – none of the players totally shut down the other.   Yes the Brisbane City players had the edge on the Rays players but I think the Rays are building some nice depth that should see them finish the NRC strongly – converting close loses into wins.  The Rays need to tighten up their defense a little bit – too many missed tackles cost them with a team like City who will run away with it.

The Hoff controlling the match was always going to have an impact and the discipline of both teams certainly left a lot to be desired with easy yellows given away.  Higginbotham was  yellow-carded in the shadow of half time for holding on to Killingworth – a little bit of a brain snap really.  Nick Stiles was not at all happy with the discipline on the field for the match, “Higgers is a Wallaby and is better than that, at half time he wasn’t at all happy with his performance there”.

Karmichael Hunt continues to build his time on the field and reading of the play after a choppy season for the Reds.  He was instrumental in setting up tries several times throughout the match, not least the try to Liam Gill just before half time.  Watching him in both the centres and at fullback, I think he might be a little better at fullback, but that then potentially pushes Laloifi to the bench and I think he is more than a finisher.  Thankfully, not a problem for me – good luck with that one Stilesy!

The Rays scored an absolute scorcher just after half time with Alex Northam putting his foot down to score in the corner – it caught the City defense napping and was converted by Angus.   Brisbane City need to be more clinical in their defense if they want to wrap up back to back NRC titles.  Stiles agrees, “the performance tonight was really disappointing, we didn’t close anything out”.

Ill discipline had the biggest impact on this match as Pili-Gaitau was shown a yellow in the second half which meant he was off with a red in the 49th minutes – I think both yellows were a little extreme, which meant that the red looked a little disproportionate.

Alex Northam carved up the field once again to make a massive break for the Rays but just couldn’t bring it home – his 7s background means he is wicked fast and he needs his fellow backs to step up and follow him – he was caught a little isolated and a try went begging. 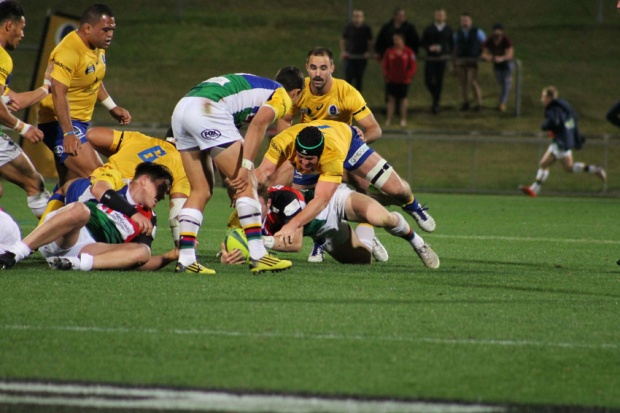 The Brisbane City backline worked well with the forwards for a great team try in the 58″ minute to put Kerevi under the posts, Hunt again instrumental in this.  City and the Rays traded tries and the Bergelin crossed for the Rays and Hodge converted while Gill was in the bin to put the score at 34-29.  It was now that City needed to put their foot down to avoid losing to a team they spanked last year 77-26.  Frisby took advantage of a loose take from a lineout to almost fall across the lineout in the easiest try of the night.

The full-time hooter sounded but Brisbane City used the opportunity to get Kerevi across the line again for this second try of the night. Henry Taefu just slotted the conversion and City finish with four wins from four and retaining the Horan Little Shield.  12 tries were scored, but neither team were happy with their performance but some young players are stepping up really well, and I think the Oz Baabaas side will have a great amount of depth when we head across the ditch.

I think the red card to Pili-Gaitau allowed City to close out the match.  Without this the North Harbour Rays could probably have kept the pressure up City for much of the second half – it was scrappy from City and the Rays have shown they know how to capitalise on that.

A tough one between Liam Gill and Karmichael Hunt for my mind – great support play from Hunt and Gill’s yellow mean that K takes it out.

Alex Northam, Mika Tela and Junior Laloifi all showed depth and strength.  With 12 tries scored it was a night to celebrate the backs.