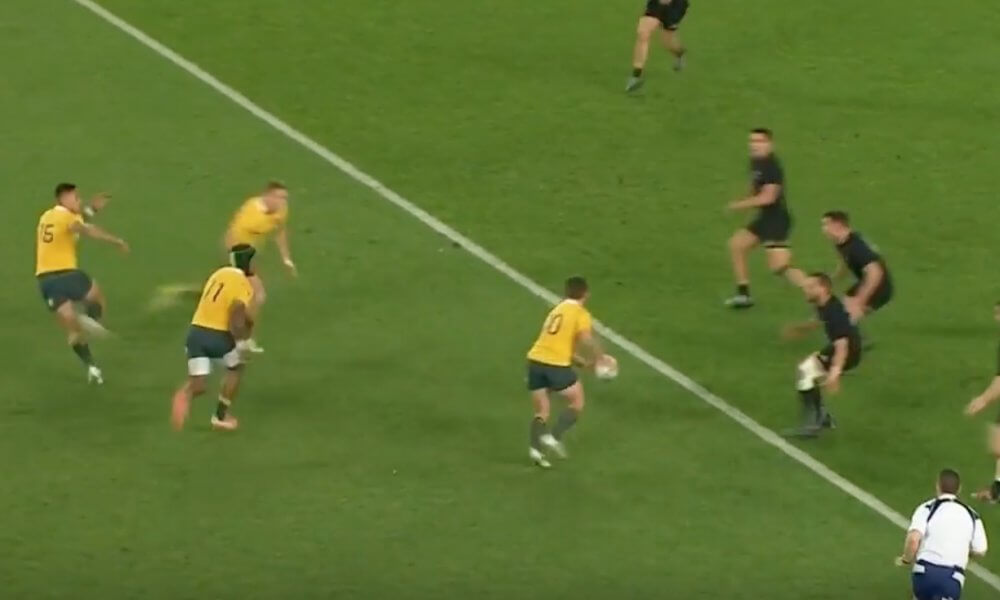 Like most coaches I watch test matches with a note book at hand. Good ideas are good ideas and coaches are like magpies always looking for new ideas and fresh inspiration.

When Nigel Owens made his blunder I penned in my note book…”Welsh ref at it AGAIN!”. As you may be aware the 1986 Wallabies were robbed by another Welsh referee (Derek Bevan) in the 2nd test in Dunedin. I was fortunate enough to be part of the 1986 Bledisloe Cup winning Wallabies and to this day we’ve not forgiven Derek.

I’m guessing Michael Cheika will have similar feelings for Nigel.

Watching this game I felt each of the 4 quarters of this test were vastly different. So I’ve picked a few clips to illustrate what that looked like. The first clip is the All Blacks first try lunched from their own 22m restart. This  highlights New Zealand’s impressive ball handling skills and spacial awareness. The Kieran Reid “no-look” pass was a peach

The second quarter saw a drop in tempo thanks to a sequence of 4 scrum resets. Both packs went at it for around 5 minutes of scrummaging. For scrum pigs it was fantastic and it has to be said the Wallaby scrum stood firm in the scrum contest. The highlight of this period was Australia’s try that was launched from the 4th reset scrum. The Wallabies took the short side on the right edge and got some terrific momentum that they built on with some good  ball playing of their own until Rory Arnold plunged over for a well deserved try.

We’ve already discussed Nigel Owens’ howler. It was clearly the pivotal moment in this period but rather than dwell on this decision let’s look at the Australian attack launched in the from a Wallaby scrum in the lead up.

We ran a play off the inside centre made famous by the Brumbies. Izzy ran the 12 role and Reece Hodge ran the 13 role (a hard line) with Bernard Foley playing the link role behind Hodge. The starter play got them over the advantage line and Foley played flat and square on the second phase, throwing a nice dummy to make the break and set up Speight for the try.

Interestingly, the Wallabies played Izzy at 12 in attack for all their major set plays and he did well in the role.

From my perspective the most interesting play the Kiwis ran in the last quarter was a 7 Man Lineout play launched in the 65th minute. New Zealand ran two Block plays to inject their back 3 into the wide channel before Ben Smith rolled the ball into space behind the Wallaby back line. The play exposed a weakness in Australia’s defence system and had the All Blacks got a decent roll of the ball Fekitoa would have scored.

At the end of the day it’s easy to take a shot at Nigel Owens and claim that we were robbed but there was a very telling statistic that we need to address going forward. The Wallabies had 5 x Red Zone shots inside the All Black’s 22m and came away with no tries. New Zealand had 2 x Red Zone shots in our 22m and scored once.

The Kiwi try launched from a line out was a variation on the play they used to great effect against us earlier in The Rugby Championship. The play is set up to look like a drive so that the defence has to narrow up as all the forwards are committed to stopping the drive.

The scrum half has a blind side winger available close to the maul to fix two more defenders. 9 then passes across the face of 10 to 12 with 13 picking a line off 12 with 10 out the back. Previously New Zealand ran the play with 13 running a hard line. Tonight 13 ran an overs line bamboozling Henry Speight who had probably been expecting the original play. It was clever coaching by Wayne Smith.

Of the 5 x Red Zone unsuccessful shots Australia’s best effort was launched from a Lineout late in the game. It was a drive set up with a regular Block play. Bernard Foley passed to Izzy out the back of Reece Hodge and Henry Speight was supporting Izzy on the inside. The play generated a scoring chance on the edge for Dane Haylett-Petty and Sefanaia Naivalu.

Being able to convert pressure into points in the Red Zone is very important. It’s one the key stats for any attack coach.

On average teams can expect to get around 4 x Red Zone shots in a match. If you can convert more Red Zone shots than your opponent you usually win. In fact a strike rate of 50% is considered World Class.

We’ve clearly got a way to go in this department and the Grand Slam campaign is just the place to work on it.