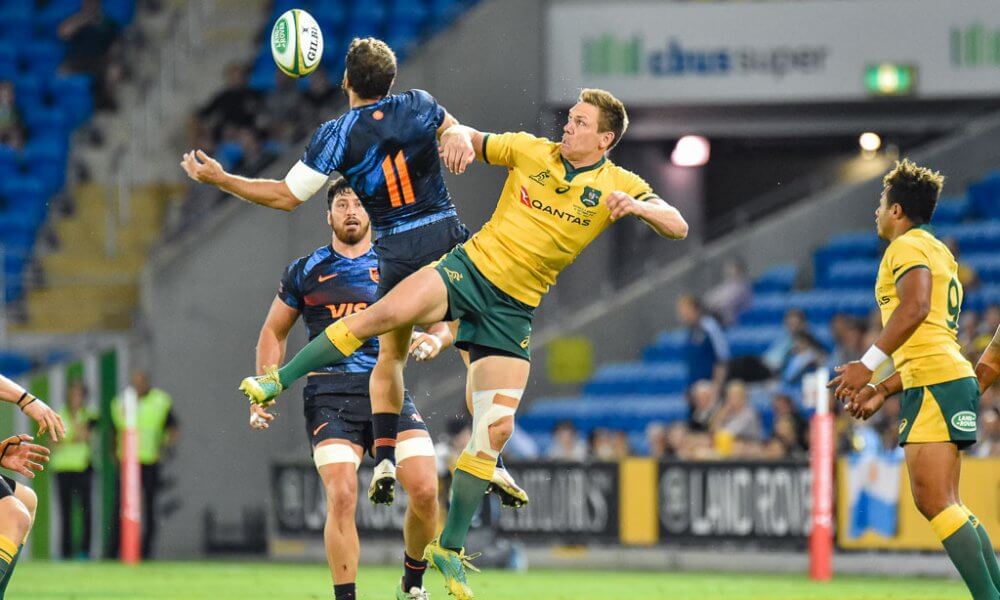 What a game it was in Salta. The Wallabies performed the “great escape” goaded by Michael Cheika’s impassioned half time spray. However, there are some defensive issues that are at the heart of our performance problems and we’ll look at these in this analysis. You simply can’t concede four tries in a test match and expect to win.

It usually takes more than one defensive error to concede a try because defence systems are designed to have secondary cover. In this first try Pablo Matera ran a beautiful hard line and broke the left shoulder tackle of Bernard Foley.

That’s disappointing but Matera is a beast so now it’s Will Genia’s job as the sweeper to clean up Foley’s mess. The disappointing thing for Nathan Grey (our defence coach) is that both our first line and secondary defence could fail so early in a test match. Matera runs 45m to score, the defence will be embarrassed by this clip in the team review.

The next try is a killer for the Wallabies because they had worked some beautiful edge attack to release Reece Hodge and great a scoring chance. As Hodge pops up an offload that would have probably set up a Wallaby try, Nicolas Sanchez swoops and intercepts the ball.

Completely against the run of play Emiliano Boffelli scores for Argentina and we’re down two tries inside 4 minutes. Conceding a try this way is annoying but it’s not something the defence coach can work on. Test rugby (like life) can be cruel sometimes.

When the Wallabies conceded this third try I’m surprised Michael Cheika didn’t throw something or someone out of the coach’s box. Our try line defence system should have lots of bodies in the front line and on their feet. Instead we were making arm tackles with players strewn on the deck when we should have our bodies in front winning collisions and muscling up.

Picture the Roosters defence in the NRL Grand Final. You defend your try line as if someone is coming through the door after your family. Instead we fell off tackles and Argentina made us look bloody average (no make that poor). We don’t need the scrum half sweeping so close to the line. If he gets in the front line we have a better chance of getting more bodies in front and stopping the Pumas in their tracks.

Not only is the scrum half out of position, but his sweeping defence is again ineffective. The Wallabies have defence issues and we need some players to step up in this area. Michael Cheika doesn’t need a mentor or another selector. He needs to show his team the Roosters Defence effort in the NRL Grand Final.

It’s no wonder Michael Cheika went ballistic when he watched his team concede this 4th try. From a centre field ruck the Pumas put on a run-around play and again busted our front line of defence due to a left shoulder tackle miss from Bernard Foley. Again the secondary defence line was Will Genia playing the sweeping role. Again he failed to make an impact in defence.

The Crusaders managed to win the 2018 Super Rugby title by hiding Richie Mo’unga on the blind side wing. If Bernard Foley is Michael Cheika’s preferred fly half it’s time for Nathan Grey to revisit this tactic. He also has to work with Will Genia on his sweeping tracking lines as Genia is getting beaten far too easily in the secondary defence line.

For mine Will Genia is too deep behind the line and he’s not tracking inside the ball. He might be worried about his speed and corner flagging. In his defence he does cover a lot of territory in attack so he’s probably under the pump a bit when it’s time for his defence duties.

Unfortunately, when the front line is defending poorly it puts the spotlight on the sweeper. I hope Michael Cheika stands by his coaches when he fronts the Rugby AU Board but he’ll need to challenge Nathan Grey to come up with a better structure and Mick Byrne to sort out Bernard Foley’s left shoulder tackling. I appreciate it’s an easy game to play from the grand stand.