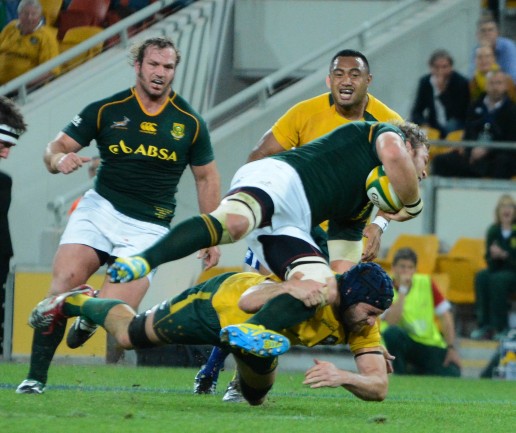 A terrible game from the Wallabies. The new coach must be tearing his hair out and the forwards coach polishing up the resume.

Any steps forward from the last match can be ignored as more than two steps back were achieved last night:

Solid enough, good around the park but must take some of the blame for the poor scrum as do all the tight five. 5

Has made a fine career as a third mobile prop but is really struggling to actually hook the ball.  3

Didn’t do enough. Scrum was poor, barely touched the ball.  4

Played a solid game in the tight. Nothing exceptional. 4

One of the few to improve from last game. Still not great but deserving of his grading. 5

A few good tackles and certainly put in. 6

Industrious, but just doesn’t have any effect and doesn’t perform his core duties. 4

I want the Ben Mowen who played for the Brumbies! Where’s he playing now? 4

Did more by trying to do less. Still a long way from the player he was in 2011. Watching Bismark pick up the ball unforgivable. 4

Defended in the front line. Tried to ignite Australia’s attack behind a well beaten pack and a well organised defence. Made errors late in the game trying to chase points. 6

Defence was better but he is part of our high ball problem and has a pop gun for a kicking boot.  6

Some say solid. I think anonymous. Wasn’t a hard running No.12 or a distributing No.12. The time to try someone else is getting closer. 4

A road block. Refuses to set up his outside men. The one time he drew and passed we made 40 metres down the right wing. 2

Interspersed hard running with terrible handling. You always get his best but the dropped ball cost him. 5

Did his best but is expected by some to do amazing things to keep us in the match.  6

Just not ready yet. 3

Still in trouble at scrum time.  3

Came on with 10 to go but I didn’t see him do much. Game was gone anyway. Unrated

G&GR Wallaby Man of the Match:

Look I tried to pick one guy for Man of the Match honours but I just can’t bring myself to give anyone a gold star.