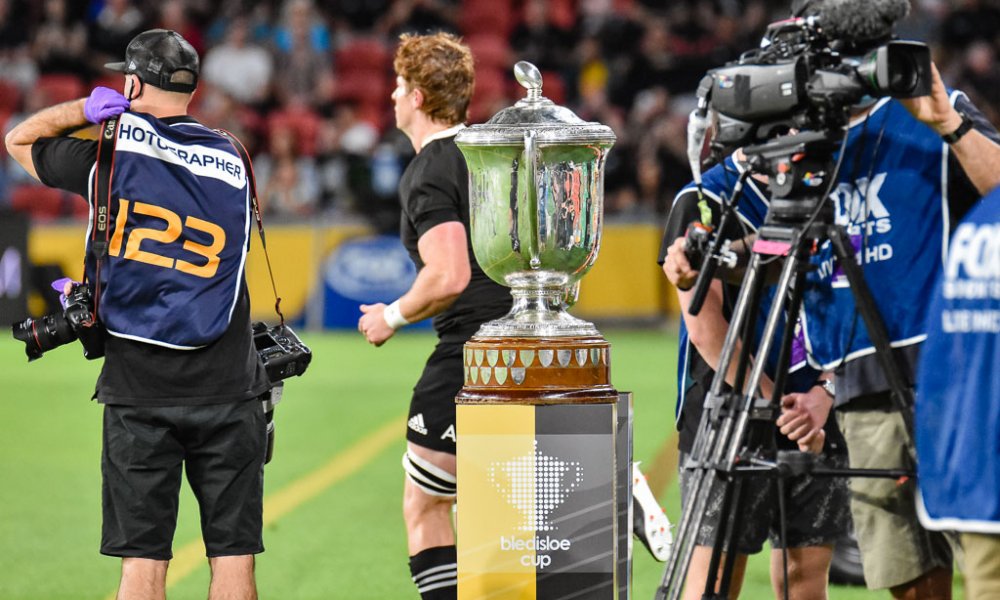 Well here we are at Eden Park, the Graveyard for the Wallabies, for Bledisloe 1.
The weather is crappy, even for Auckland. But KARL assures me that Auckland is full of
wankers, so they deserve it. What I also notice during the warm-up is the propensity for crap
haircuts. D-Mac and Tate McDermott leading the push. What are they thinking.
A late change for the All Blacks with Scott Barrett stood down due to illness being replaced
by the Auckland Blues Captain Tuipulotu. This match was Aaron Smith’s 100th cap for the
Darkness.

First Half – Well, the first half was a series of errors for both teams. With the AB’s looking
categorically rusty, which isn’t such a bad thing for the Wallabies. Only the Wallabies were
just as bad. With the Aussie having two handling errors in the first 5 mins. What didn’t help
the Wallabies was blowing their first 5 line outs. Hunter Paisami looks good in the first half
causing the Kiwis to knock on and stripping Mo’unga. An easy penalty gives Richie a shot at
goal, putting our sheep loving brothers up 3-0.
Banks continues his shocking form with a Falcon on a kick-off receive, deemed a knock when
he was that crap, he didn’t get his hands to it. Doing Kurtley ‘Gilbert’ Beale proud, my boy.
Kiwis with the scrum, get a scrum penalty. Take the kick and are up 6-0.
Wob’s shortly there after go in to attack, but the Wallaby curse strikes again, and we turn
over the ball. Kiwi’s take the penalty, up 9-0. Aussie get possession and are attacking, and
Tate McDermott is taken high and gets a penalty, with Noah pinning it: 9-3 for the Kiwi’s.
Aussie’s get a line out with the throw going to Tate McDermott at the front, AB’s deemed
offside and Wallabies get the penalty. We kick for touch, take the line out and throw it long
to Paisami on the run, nice pass to Kellaway – try to the Aussies. Lolo misses the conversion
Kiwi’s 9-8.
A bizarre occurrence with Australia having the advantage and then the penalty goes to the
Kiwis with the Australian team marched ten yards (KARL you will have to explain that one,
maybe too many beers, but no idea what happened there). Kiwi’s then go for touch, good
line out and Sevu Reece over for a try. Half Time Kiwi’s up 16-8.

Second Half – The second half kicks off and the Kiwi’s are penalised for Retallick not rolling
away (no surprises there). Tate McDermott takes a box kick, Sevu Reece takes it and knocks
on. There is nothing much happening, and Tate hooks it around to go into touch. Kiwis take
the line out and good ol’ slippery Mo’unga slides through, beautiful passing through the
hands Kiwi’s score, but the try is reviewed for potential forward passes and obstruction. No
try and we come back to a scrum on the half way line. Aussie’s get a half arm for a Kiwi early
engagement, scrum resets, and the Aussie get a full arm with the Kiwi’s dropping their bind
on 7 A’s.
Aussies take the penalty and Lolo attempts a kick with the wind but pulls it to the left.
Aussies go into attack with 10 phases of good bad, Lolo throws a cut-out pass and that
bastard Mo’unga intercepts and runs 70 yards to score a try. 23-8 to the Sheep lovers. The
game restarts, and Aussies score a penalty when the Kiwi’s seal it off. Banks kicks for touch,
not well, with both sides front rows going for the bench. Aussie get possession and surprise
surprise turn it over again. Kiwi’s with possession and then knock it on, Aussie scrum feed
however, Hooper slips off Tupou, causing the scrum to collapse, Kiwi penalty. Kiwi’s attack
with Havali crossing the line for a try on the left. Mo’unga shanks it 28-8 at the 60 min mark.
The Kiwi’s go back on attack, and the Aussie’s are off side, Kiwi’s get the advantage, and go
wide with D-Mac over for a try. Richie misses again (pretty rare with this chap) due to wind
33-8. Aussies get the penalty on restart, take the kick for a line out. Our line out finally starts
working, we gain an advantage kick for the line out at the 5m line. We gain another
advantage, keep attacking, 3rd advantage (where is the cheese?) spin it wide to Banks who
scores. Lolo misses again (re-occurring theme) 33-13.
Errors from both sides as the fatigue starts to set it. Wob’s gain a scrum penalty, but our kick
for touch is utter shite. Line out, on attack, Lolo toes it through and Banks scores a try. Lolo
yet again misses a conversion 33-18. Banks has a further two kicks for touch that are sub-
standard. Wobs go back on attack, but Jordan Uelese goes off his feet for a Kiwi penalty. Aus
has one last attacking raid, gaining two advantages (still no cheese). We take the kick for
touch, line out, beautiful rolling maul and Uelese goes over for a try. Lolo finally gets a
conversion. Full time NZ 33- Aus 25.

Conclusion – Overall a rusty performance by both teams, and the score line flattered the
Kiwi’s performance. It will interesting to see how both teams reset and go again next week.
But for the Aussies, we didn’t get flogged so overall, we can’t complain too much.

Was the bench coming on for both teams. The performance of both
sides lifted and gelled more when their benches came on. The Aussies actually scored tries
at Eden park, which is an unusual occurrence. We had much better discipline, but we were let
down by some poor handling and average kicking by both Lolo and Banks.

Has to be Richie Mo’unga with a fantastic performance of distribution,
kicking in hard conditions, and scoring a beautiful intercept try.

Kellaway put in a good performance for his starting debut. Tate McDermott
looked good at scrum half. Banks although scoring two tries had a performance he would
rather forget.