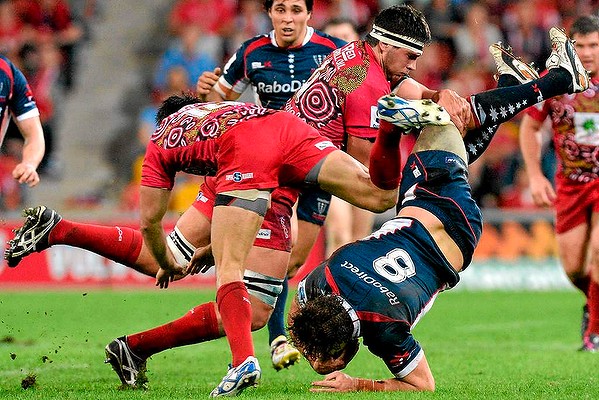 It’s the time of the year where everybody is spruiking the chances of their team in the upcoming Super Rugby competition, but deep down they know that their team sucks in some areas.

Here is a Green and Gold Rugby assessment of the suckiness of the Australian teams. Don’t take it too seriously: it’s a bit of dubious humour and yeah – we know we left a lot out, but space did not allow a full reckoning of suckiness.

They were the bottom team of the competition last year and have never finished higher than twelfth, which was achieved in 2013, when they won five games. They lost five in a row to finish their season in 2014 and their surrender against the Bulls at Loftus in their last match was an embarrassment.

They had the fourth worst defence in Super Rugby last year, measured in tries scored against them, which is not the end of the world if a team scores a lot of tries, but they were second worst in that department too. That sucks.

Their pre-season was great and they started the tournament well at home against a wretched Cheetahs team, but that was the only game of the season when their backs looked on song.

The Rebels were allowed to stack their team with experienced imports on commencement in 2011 and this seemed like a great idea, but it was not one that resulted in a lot of victories.

Now the Rebels are showing the effects of operating in a non-rugby state: players imported from other states tend to move on and be replaced by others who are not vital to the teams they came from. This does not improve results and good players get shy of going to a losing team and it becomes a circular problem. That sucks.

Yet the Melbourne Storm, also playing a minority sport in Victoria, has been one of the most successful rugby league teams in the country since its inception—albeit with a bigger budget.

Hugh Pyle of Stade Francais – will be missed by the Rebels

What else sucks? They lost two of their best players in fullback Jason Woodward and fringe Wallaby lock Hugh Pyle, who was a success for Stade Francais from the moment he arrived in Paris. They may have to decide who of the Swiss Army Knife [SAK] utility Mike Harris, the unwanted Cam Crawford or the brilliant but brittle Jonah Placid, will replace Hayward.

I didn’t mention Jack Debreczeni as a 15: who else will play flyhalf? Bryce Hegarty has not impressed. Maybe SAK will get a run. Also: one centre fewer and another lock in the main group would have made for a better team profile.

They didn’t recruit many experienced forwards this year but one they did is a doozie: 38-year-old Radike Samo, whose library books are long overdue. He will not help one of the main problems the Rebels have: not enough domination in the forward contests.

Although their tries dried up in 2014, the appointment of Todd Louden as attack coach should work a treat. I believe his temperament will be a good fit with that of Tony McGahan, who inherited some problems when he was appointed.

They have a couple of fine tight head props and they have big-engined forwards such as recent Wallabies Sean McMahon and Luke Jones. Like most Aussie teams they have a decent backrow.

If proven talent at flyhalf is thin, there is plenty in the midfield.

Dom Shipperly could be a threat on the wing and if Cam Crawford can find his Waratah 2013 form at fullback or wing he will be a top acquisition. Both he and Debreczini have booming boots and they could make the Rebels the best Aussie team in clearing the ball from their 22 or to make big gains in territory.

If Placid can grow up as a player he could be a star. He would have to be one of the fastest players in the country, but he lacks confidence and clear decision-making.

See next page for why the Western Force sucks

QLD Reds Announce Leadership Team for 2015
What’s the South African influence on the Emergence of a Force?