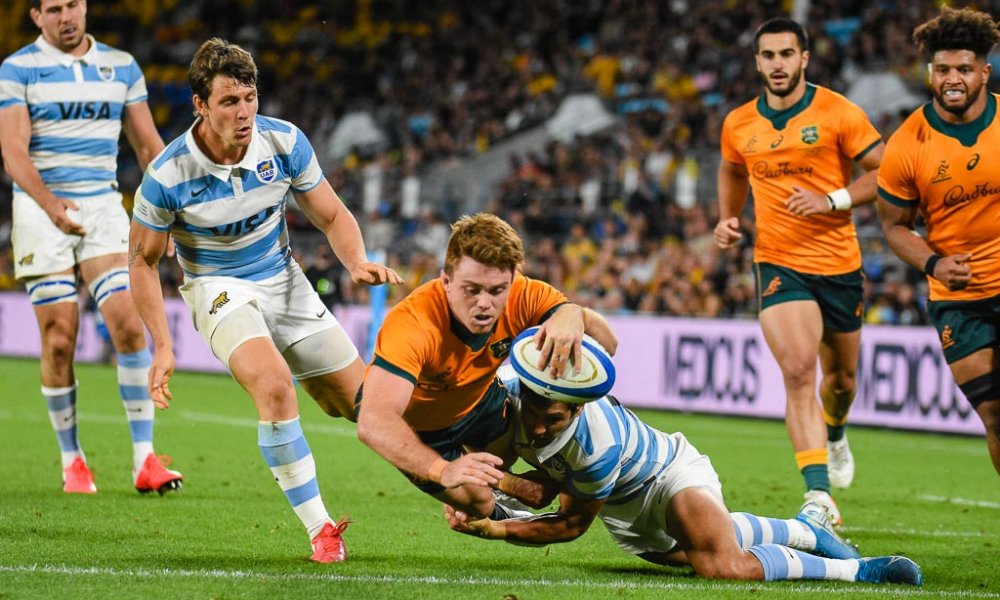 Six Argentinian players went on the road trip to the Hotel California and won’t feature today. Australia is in the somewhat unusual position of being on the cusp of four wins in a row. The wallabies need to account for a weakened Puma and do it handily to maintain momentum.

If I could sum up the first quarter of this game in one word, it would be vanilla. Australia led 3-0, but Argentina had missed their own penalty chance and a drop goal. While the Wallabies seemed to have the best of general play and were in complete control defensively, they could easily have been down on the scoreboard. The Wallabies’ scrum on the other hand was completely dominant, and they’d picked off an Argentinian lineout as well.

At the start of the second quarter, the Pumas discipline once again let them down. At three lineouts in a row they pushed early and referee Jaco Peyper had had enough and sent the big second rower, Tomas Lavanini to the naughty chair for ten. Australia kicked for the line again a drove the ball over the line for their first try. Bread and butter for the Wallabies hooker, Folau Fainga’a

The sin bin produced its second try about five minutes later after yet another penalty for the Wallabies. They kicked to a lineout, swept Folau Fainga’a around the back and ran him at the flyhalf, at the last moment he put Valentini through the gap. He drew the fullback and passed back inside to Kellaway who was trailing up the inside channel like all good blind wingers sniffing out a try. Cooper slotted the conversion and the Wallabies led 15-0. Argentina then kicked a penalty right on half-time to trail 15-3.

Just minutes into the second half, the Wallabies scored again. This time it was the backs who combined to set up a nice gap for Kerevi to slide through. Ikitau took the ball at first receiver while Cooper, Kerevi and Kellaway slide from left to right to make the numbers. Cooper collected the ball and faked a long pass to commit the defence, and then passed short to Kerevi running at the hole.

The wallabies were starting to dominate play coming into the final quarter, and it was starting to stretch and tire the Puma’s defence. Kellaway went in for in second after a very long build up from the entire team. Two minutes later, he had his third after a long half break from Hodge and all of a sudden it was 32-3.

Thomas Gallo scored Argentina’s first try when he picked and drove quickly after his teamed had worked their way down the field with some enterprising play. Not long after the reserve prop scored his second and suddenly Los Pumas were looking at denying Australia their bonus point.

The Wallabies then made one of the classic mistakes, the first is never start a land war in Asia, but close behind it is never use all your back reserves too far out from full time. With only reserve hooker Lachlan Lonergan left on the pine starting winger hit the turf with a leg injury and Australia were force to play him Lonergan at blindside and move Hooper into the centre’s. Hooper, almost immediately, got himself yellow carded in disgust and who could blame him.

The game ended with Argentina hammering the Aussie line and Australia hanging on for grim death and man down and not one backline player in their original position.

The twelve points scored when Tomas Lavanini was in the bin changed the game and the Pumas never recovered.

I don’t usually give these things to Winger/Fullbacks, but tonight Andrew Kellaway gets our Man Of The Match

Jordan Petaia made a good fist of filling Koriobete’s shoes. Hooper played his arse off. Fainga’a was great. Ikitau is growing into play making out centre beautifully.