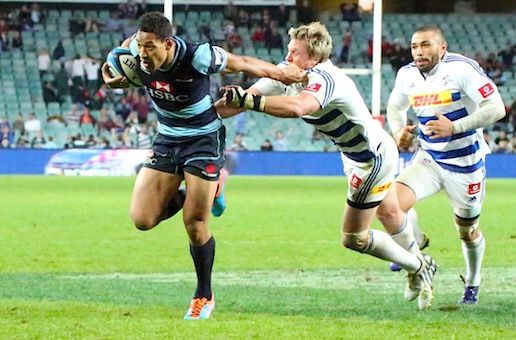 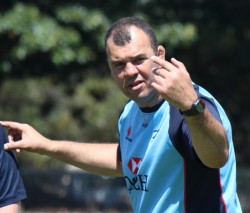 In 2012 we saw an incredibly negative and unsuccessful style of rugby coming out of camp Waratah. Featuring some very dangerous players in the forms of Tom Kingston, Adam Ashley Cooper and Sarel Pretorious along with a Wallaby-laden forward pack anyone in their right mind would have predicted a good season for the NSW Waratahs in 2012.

What the faithful received was a 4-12 disaster of a season. The Waratahs had not scored so few tries per game (1.94) or leaked so many tries per game (2.69) since 2007. In 2007 the Waratahs finished 13th on a table of 14 teams. Things looked grim until former Leinster and Heineken Cup winning coach Michael Cheika arrived in Sydney late in 2012.

Michael Cheika has clearly shaken things up in Sydney these past few months and has completely revolutionised the Waratah’s approach to the game. Through this he has brought the Waratahs up to 33 tries scored on the season so far, sitting second on the table only to the Chiefs. This comes out to three tries per match, 2.36 if the Kings beat-up is factored out.

There are quite a few other stats which support this concept of the Waratahs having switched to a more attack-oriented game plan based around keeping the ball alive and in play. To start off, the Waratahs complete only 73 per cent of their possessions within four phases, the lowest of any team in the competition. They also only complete 88 per cent of their possessions within six phases, tied for second with the Crusaders and behind the Highlanders.

The Tahs also top the Australian conference in runs per match (106) while topping the entire competition in metres run per match (616). One statistic that really stood out to me was the fact that the Waratahs only average two pick and drives per match, the lowest of any team in Super Rugby. Quick rucks are another area where the Waratahs are strong, second only to the Chiefs with 19 per match. The icing on the running rugby cake is that the Waratahs have kicked the ball less than any other team in Super Rugby as well, averaging only 14 kicks per match.

The new forward and general attacking structures and pattern of the Waratahs which have been installed by Cheika can be credited with this recent explosion in attacking figures for the Waratahs.

The System at a Glance

The most basic tenets of Cheika’s new system are as follows:

The Waratahs use both the nine and the 10 to direct their attack depending on where they are on the field. Between the 22’s the determining factor (aside from Foley getting pulled into a ruck or other things of this nature) seems to be how near or far the Tahs are from the touch line. When the ball is being played within 10-15m of either touch line the nine directs the attack. This usually translates into Lucas/McKibbin passing directly to a forward running onto the ball with two supporting forwards behind him.

On occasion the ball will be moved out to a flat line of players, generally a mixture of backs with one or two forwards interspersed (Hooper loves to pop up here) amongst them. This seems to be done largely for the sake of keeping the defense guessing. It is done even when the defence has a numbers advantage over the line of attacking players. This structure will also occasionally spill over into the midfield before the 10 becomes the axis of attack. Below is a clip of this structure off of the nine.

When the Waratahs are in the midfield the structure changes and they begin to use the 10 as the axis of the attack. The scrumhalf passes off the ruck to a back running onto the ball. Generally this is Foley but other players step into the first-receiver role fairly frequently. After receiving the ball the first receiver occasionally takes the line on but more often shifts the ball out to a pod of three forwards outside of him. By playing the forward pod out so wide this structure stretches the opposition forwards (particularly the tight-five) laterally more than they are accustomed to.

This pattern is repeated in such a way that the Waratahs may likely play the ball next to both sidelines within five or six phases of play.  This stretching action combined with the slower feet of some of the big men can rapidly create holes which are exploited by quick offloading amongst the forwards or rapid ball movement off the deck in the ensuing phases. Below is a clip of this structure off of the 10.

Another point of note in the above clip is that the Waratahs tend to play off of the nine when close to the opposition try line. The forwards continue to round the corner from short balls off the nine until the 10 sees space and calls for the ball. This is a very common structure and pattern of play though, not something unique to this system. But part of it nonetheless. Below is a clip of the Tahs try line attack.

The overriding pattern of play here is that the Waratahs are attempting to ‘stretch’ the defence to the point of breaking. After the structure off of the nine draws some defenders in close to the touch line the ball is brought out to the 10 in the midfield where it is shifted through that structure until the ball reaches the other touch line. Rinse and repeat. It is a bit like stretching a rubber band until it snaps. By constantly shifting the point of attack and forcing the opposition forwards to play wider than they normally do these structures and this pattern of play can create holes all over the field very quickly.

The ability of the forwards to execute a short passing game is crucial to making this pattern work. By incorporating the short passing game they fix the defenders and really put them in a very compromised position. The best way to counter the rapid lateral movement of the ball would be an effective drift defence. But by using a short passing game amongst the forward pods as well as the occasional runner joining the line against the grain of play the Waratahs can rapidly and effectively punish any team who gets overzealous with their slide.

Dave Dennis’ pass in the above clip is a wonderful example of this. Although it is somewhat difficult to execute properly, when done right this pattern of attack can force defenses to choose between a lesser of two evils very regularly. This is nothing but an enormous positive for any attacking team. 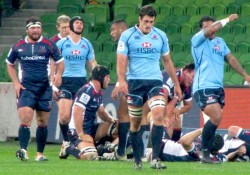 The most obvious and major vulnerability of these structures is that the ruck area can be attacked more easily than usual due to the emphasis on keeping runners out of the ruck and in the line. If the supporting forwards do not rapidly and effectively move over the ball after the tackle is made McKibbin or Lucas can quickly find themselves in a shit-fight with several forwards much bigger than they are.

This can lead to turn over ball which is especially unfavourable for the Tahs as they likely have several would-be defenders drifting wider than usual and thus are not able to effectively shut down a counter attacking attempt made from turnover ball near the ruck. For an example of when this goes very wrong – see the Rebels match just last weekend.

But when the forwards are able to properly execute at the breakdown this rapid lateral movement across the field can shred a defence in only a few phases. It is almost literally a matter of time before someone like Betham, Ashley-Cooper, Folau, Horne, or whomever are put through a gap wider than they are. It is an incredibly attack-oriented pattern and now that the Waratahs have begun to execute has made for some cracking matches.

If you had asked me at the end of last season whether I’d rather swallow my wristwatch or watch the Waratahs in 2013 I would have definitely chosen the wristwatch. This is no longer anywhere near the case. Cheika has managed to make this team do a near complete 180 degree turn in a relatively short period of time. I believe this speaks to his quality as a Head Coach and the effectiveness of his patterns if executed properly. For the sake of the Tahs I hope he sticks around, if he can’t get people out to SFS to see the boys playing then I’m not totally convinced that anybody can.

To finish, here’s a short clip of the entire system at work. Some impressive defence by the Brumbies here forces Foley into the kick for touch.

Junior Wallabies in the race
GAGRs Power Rankings Round 15